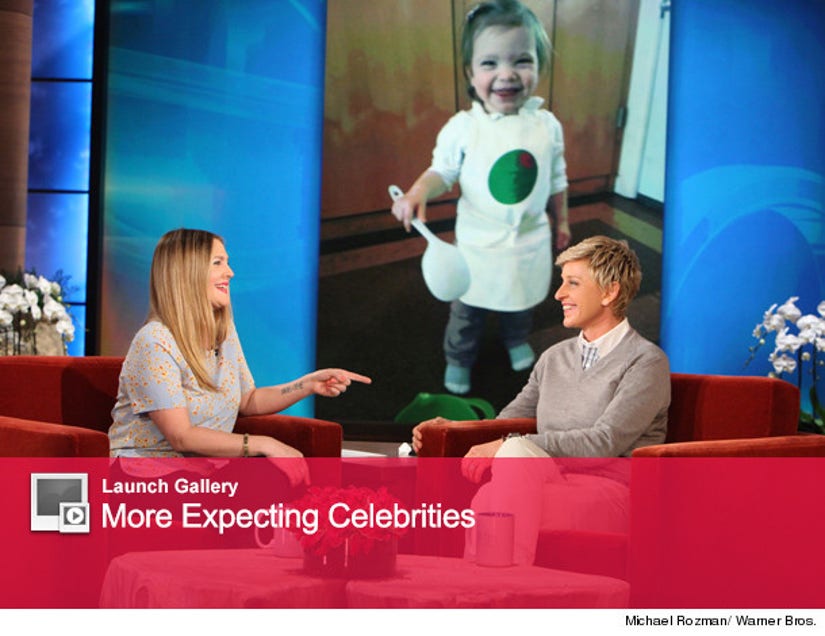 Drew Barrymore doesn't shy away from a joke!

The expecting mom and Ellen DeGeneres had some fun together at the People's Choice Awards last Wednesday. As the actress presented the award for Favorite Comedic Movie Actor to Adam Sandler, she mentioned the talk show host, who apparently poked fun at her weight behind-the-scenes.

"Ellen DeGeneres told me I was fat!" Barrymore said to the audience, "But I'm not, it was a joke. It was really funny."

When Drew stopped by "The Ellen DeGeneres Show," Ellen wanted to clear the air.

"Because you did!" the actress protested.

"No I didn't!" the funny woman replied.

"She did!" the glowing mom added. "Roll the tape."

Drew didn't get the proof she wanted -- producers played a tape of Ellen saying "fabulous" over her saying "fat."

Don't worry, there are no hard feelings between the long-time friends!

"And the truth is your joke was super funny," the 36-year-old actress said. "The entire room was laughing. I went out and thought I would try it myself and it just flooded and dudded, but you know, that's okay because you pick up and move on."

The actress is expecting her second child (another girl!) with her hubby Will Kopelman.

So, is she having any weird cravings?

"Oh god. I mean I just eat everything I want which isn't healthy," Drew explained. "I'm like bigger this time than my first time. My doctor the other day was like ya so I think maybe pull back. A little bit. I was like really? I thought I was doing great. I still fit into those jeans. I mean they hurt when I wear them but I'm still in them so ya. But you know, listen, it takes 9 months to make it, it takes 9 months to unmake it. I don't ever pose like that I'm so fabulous and I lose it like that. I just want to enjoy the pasta right now."

We think she looks amazing!

Check out the video above to hear what else she said about baby Olive, and click "Launch Gallery" above to see more expecting celebrities!