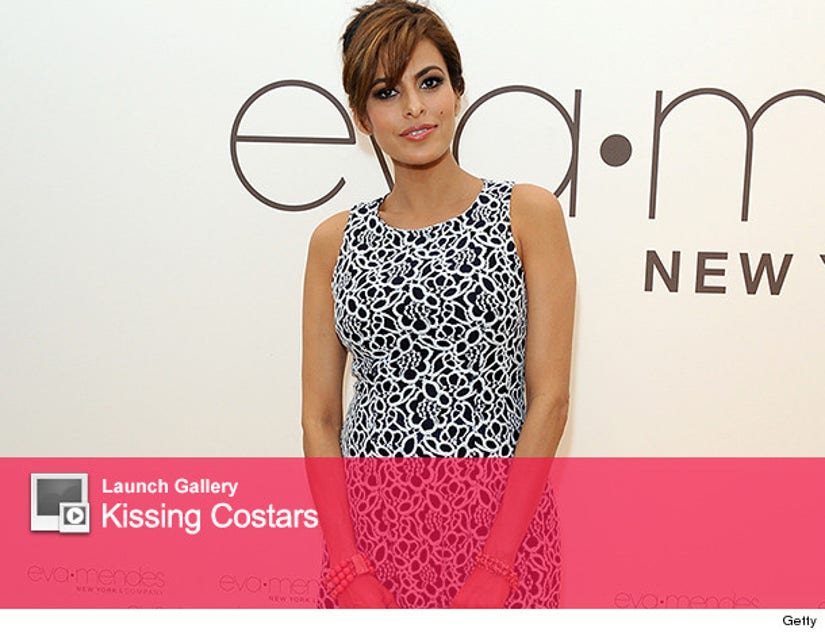 The actress chatted with E! News correspondent Catt Sadler at the New York & Company launch of her NY & C Spring collection pop-up shop at the Beverly Center in Los Angeles on Tuesday.

Sporting a navy blue and white flower-printed frock, the brunette beauty looked gorgeous for her clothing line launch, and couldn't help but smile while talking about the "Drive" star.

When asked about working with Gosling on his directorial debut, "How to Catch a Monster," Mendes seemed over-the-moon about the whole experience.

"It's basically a dark fairy tale, and I play a woman named Cat," Eva told the site. "Yeah, it's a beautiful, beautiful film," she added.

"He really created the most beautiful, collaborative, creative atmosphere on set," Mendes said of the experience. "I know I'm biased."

The 33-year-old actor wrote and directed the fantasy flick, and when asked if Ryan runs a tight ship the 40-year-old revealed, "It's a perfect ship."

This isn't the first time the now-couple have worked together, though -- Ryan and Eva first met on the set of their flick "The Place Beyond the Pines" in 2012.

Despite the breakup rumors, it definitely sounds like the two are still going strong! What do you think about the "Hitch" star's candid comments?

Tell toofab below and check out even more Hollywood couples who met on set in the gallery above!