After three standalone episodes filling us in on Beth, the group headed to Washington and Daryl & Carol's mission to Atlanta, all the story-lines were woven together again for the last episode before the mid-season finale.

And man did it set up some intriguing situations for next week!

Once again we're recapping this episode with Eugene himself, Josh McDermitt. And while his character spent most of the episode knocked out cold, the actor has some insight into what's to come for our favorite survivors ... and some of the action that goes down on set.

Let's break this one down by group ... 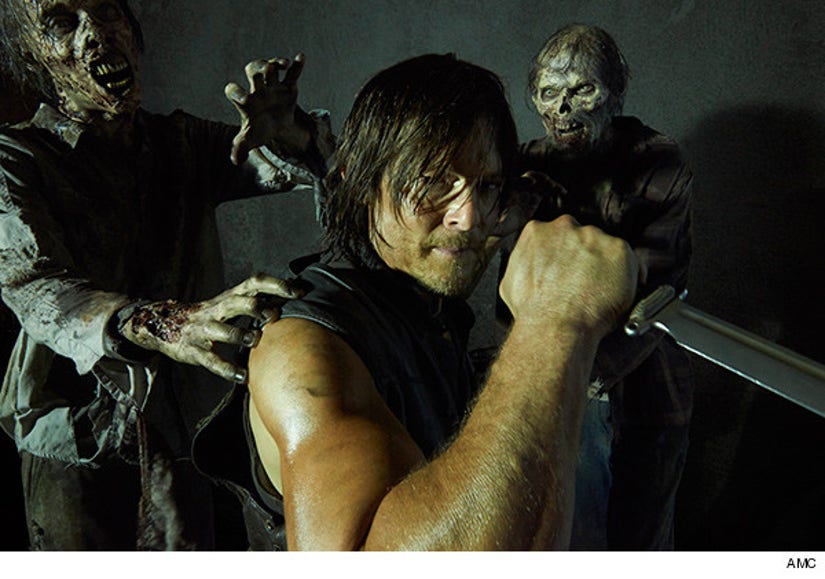 The Plan to Get Carol & Beth

The group is out for revenge after Daryl and Noah fill them in on Beth and Carol's whereabouts. Rick wants to go in, guns blazing, to get them back -- but Daryl and Tyreese talk him down. Instead, Daryl proves how much he's really changed by persuading them to solve the issue a little more peacefully -- by kidnapping two of Dawn's cops and orchestrating an exchange.

They're able to apprehend three of the cops, leading us to our Badass Moment of the Week.

While fighting off one of Dawn's men, Daryl gouges a walker's eyes out, tears its head off and uses said zombie head to beat off his assailant.

"Honestly, Daryl is in the running for the Badass Moment of the Week every week, just because Daryl himself is a badass," says McDermitt. "Nobody except maybe Abraham (wink wink) comes close to being as much of a badass as Daryl!"

Sasha is still dealing with her grief over Bob's death and it seems to be affecting her judgement. She comes to trust one of the captives, the one they call Lampson, and agrees to help him put one of his friends out of his misery. When she brings him away from the rest of the group, he knocks her out cold and runs off -- possibly to warn Dawn or get backup. 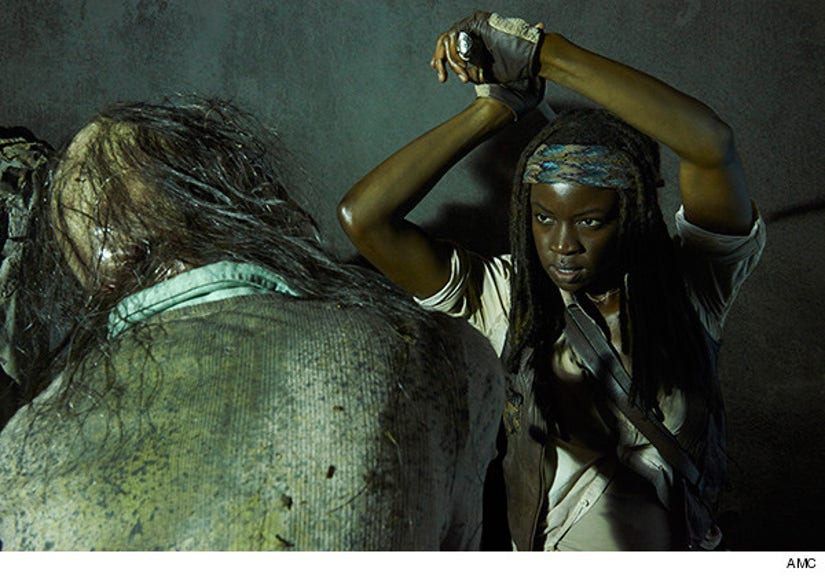 Meanwhile, Back at the Church

Father Gabriel is having a tough time with the desecration of his church. After the brutal massacre that happened there with the Hunters, there's still blood all over the floors -- and everyone else is tearing the place apart to fortify it.

From ripping up the pews to dismantling the organ, pieces from all over are being used to help keep the walkers away.

While he's a man of God -- albeit one that turned away his congregation at their time of need -- Carl tells him he really needs to learn to fight. He tells him its important to keep moving and makes him pick up a weapon. Michonne later tells him "The things we do, they're worth it" -- but it doesn't seem like he agrees.

"They're both right," says McDermitt. "But I think I'm going to side with Michonne. We're living in a very dangerous world and if Father Gabriel doesn't get with the program and come to terms with reality he's gonna quickly be left behind."

Of course, at the end of the episode, he decides to leave them behind -- and sneaks out through the floorboards on his own. How long does he think he'll last solo?! 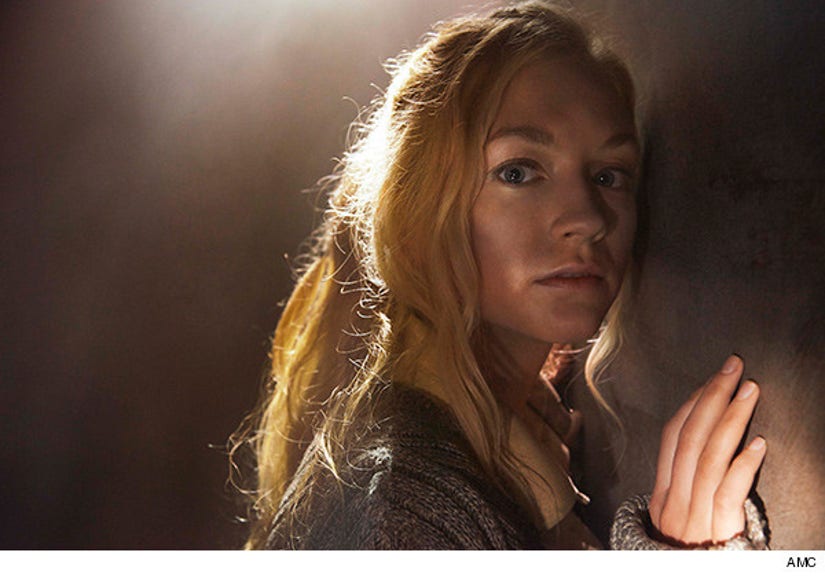 Things continue to be pretty confusing inside the hospital, as Dawn's motives are still shady as ever.

After telling one doctor to pull Carol off life support, Dawn then confides in Beth, giving her a key to the medicine cabinet and telling him to save Carol on her own. When asked why she's trusting her, Dawn says "I thought you were weak, you proved me wrong."

Edwards then tells her which meds she'll need to help stabilize Carol -- but warns Beth not to trust Dawn.

"Everyone on the show thinks they are in the right. Whether they are perceived by the audience as a good person or a bad person, that character justifies their actions," says McDermitt of Dawn's true intentions. "The longer the season goes on, the more we will learn about Dawn."

It looks like Carol is among the living ... for now. 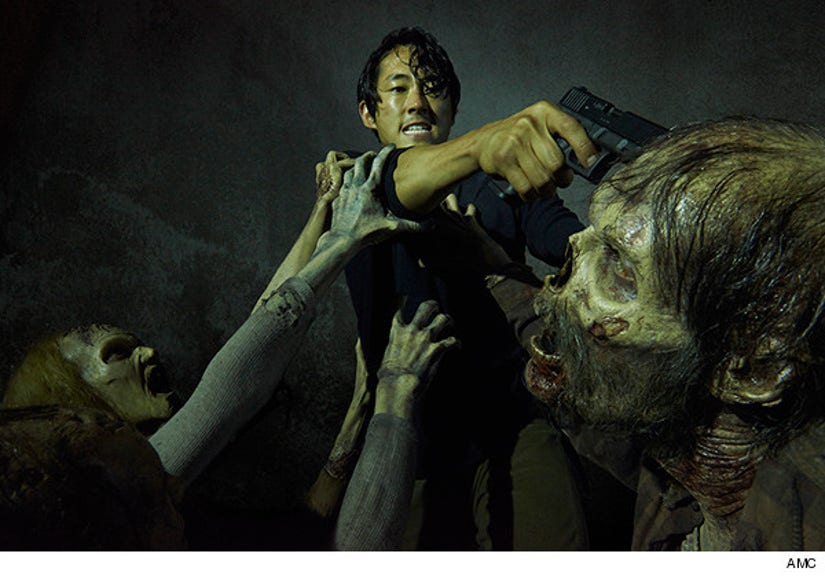 With Eugene still knocked unconscious and Abraham in a state of serious shock, Glenn, Tara and Rosita go to get some water for the group. Maggie says behind to keep an eye on Abe.

It's clear that Tara is O.K. with Eugene's lies -- saying he used the one skill he had to keep living -- Glenn has a hard time accepting their fate.

"Eugene is going have to prove himself all over again. He's broken the trust that he's had with the group therefore he's on everyone's s**t list," says McDermitt. "At this point he has everything to prove because he has absolutely nothing to offer. He'll obviously have to step up in the brains department since that seems to be his only asset in survival at this point."

Luckily for Eugene, he proves he's somewhat useful during Josh's pick for "Oh, S**t!" Moment of the Week.

"The OH S*!T moment of the week goes to Rosita," he says. "She was questioned about her knowledge on water filtration and she says Eugene taught her. Oh s**t! Maybe Eugene does have something to offer the group!"

Meanwhile, Maggie tries to bring Abraham back -- telling him to "Get over yourself. You're not the only one who lost something today. It's never going to get any better than this."

By the end of the episode, Abe confirms he's not ready to die just yet, just as Eugene wakes up.

We had a lot of moving parts this week, setting the stage for a pretty explosive mid-season finale. Considering AMC isn't even screening the episode for critics, we can expect some pretty big surprises -- and probably a MAJOR death.

Who do you think's going to bite it? Our money is on Beth or Carol -- there's no way both of Daryl's ladies are coming back from Grady Memorial alive, right?