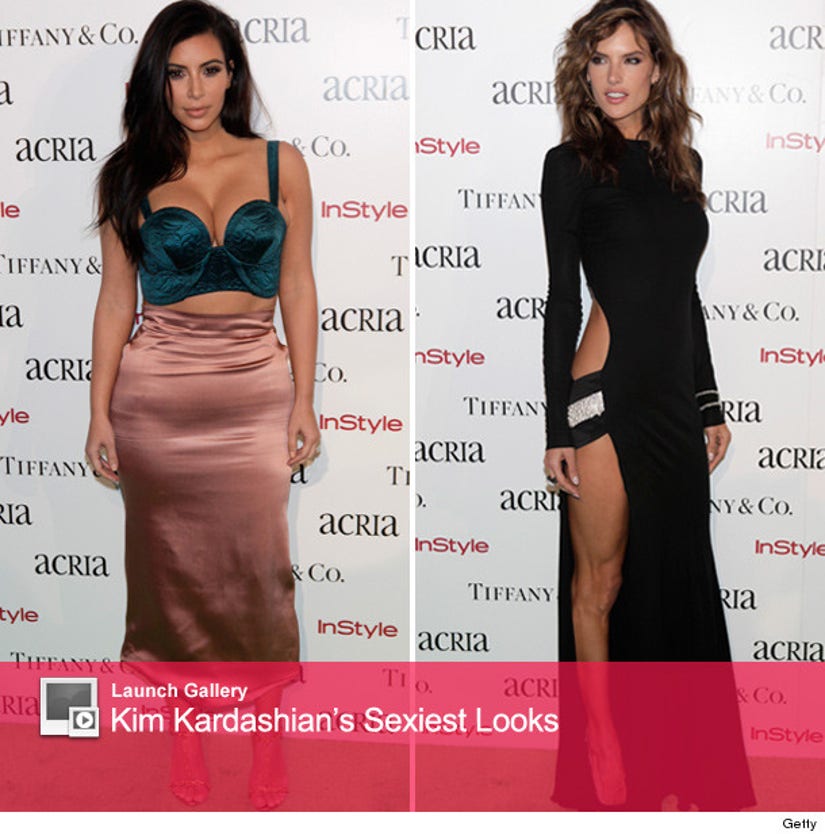 The reality star flaunted her killer curves -- and a whole lot of cleavage -- in a teal bustier and a form-fitting blush satin skirt by Ulyana Sergeenko.

Mrs. Kanye West is proud of her enviable bod, but she had to work hard to get back in shape after giving birth to daughter North West last June.

She recently spoke out about why she thinks she gained so much weight during her pregnancy. "I'd think God was doing this for a reason," she told Elle U.K. "He was saying: 'Kim, you think you're so hot, but look what I can do to you.'"

"My body just went crazy. After five months I swore I'd never get pregnant again. I got so huge and it felt like someone had taken over my body," she continued. "It's taken me a long time to be happy with my body and for my confidence to grow to what it is today. I grew up when the body to have was the tall, slim, supermodel one, like Cindy Crawford's. No one looked like me."

While last night's look wasn't our favorite, Kim should be proud of that body!

Meanwhile, Alessandra flashed her famous legs and abs in a black jersey Alexandre Vauthier embellished gown with a dangerously high slit up the side. In fact, the only thing holding the dress closed was a small panel that covered her ... um, hip bones.

The mother-of-two is no stranger to flaunting her figure, but she has admitted that physical beauty isn't the most important thing.

"Having a perfect body isn't everything," she said in the June 2014 issue of Self magazine. "I want my daughter to be nice, have a good education and be disciplined. That's what makes people like her. A perfect butt doesn't make an amazing person. It's about feeling confident."

We can see why Alessandra is feeling confident -- look at her perfect butt!

Who do you think looked sexier last night: Kim or Alessandra? Sound off below.