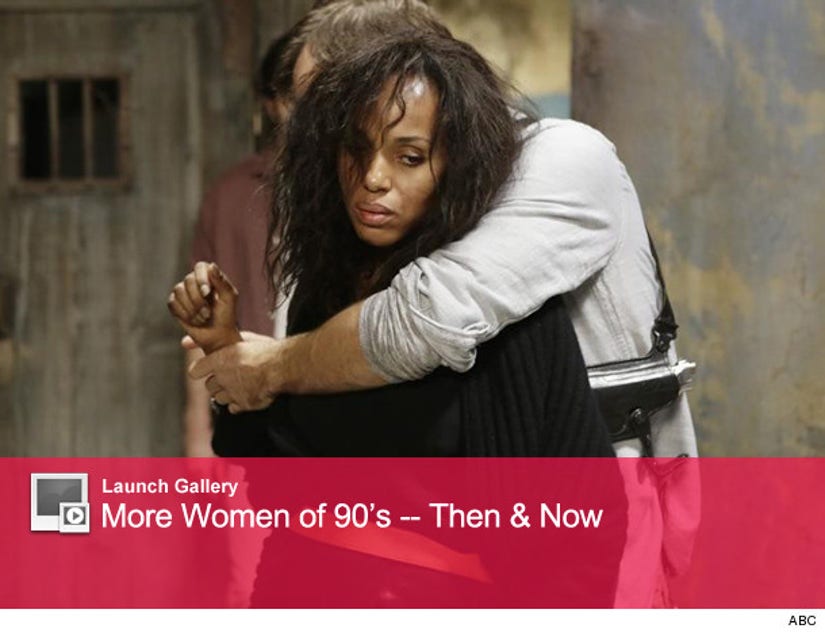 After a two-month hiatus, "Scandal" is finally back -- and Thursday night's season premiere had us on the edge of our seats!

The hit ABC series took a much darker turn, as we saw Olivia Pope (Kerry Washington) getting snatched out of her house, leaving only a disturbing red wine stain behind on her white couch.

We all huddled together at the office to watch -- and, of course, the red wine was flowing. Time for a refill ladies!

We almost spilled our own glasses when we realized the kidnappers actually took Olivia next door. That's right -- the entire time Jake (Scott Foley) was running after her in his underwear (no complaints here!), the head Gladiator was right across the hall.

Olivia woke up in a cell in what appeared to be the Middle East and comforted her fellow captive, Ian. While we were shocked by how good the actress looked after her traumatic kidnapping, it was her trip to the bathroom that had us all talking. We all agreed that it's time to squat when facing such a dirty throne!

Pope's time in captivity definitely started to wear on her ... and her hair! The brunette beauty's freshly-blown-out locks started to look ... well, like she was sweatin' like Beyonce.

After days in the cell, Liv dreamed about a better life to keep from going crazy. Her thoughts turned from Jake rescuing her to a picture-perfect romance with President Fitz (Tony Goldwyn) in Vermont. In the dream sequence, he's a mayor, she makes jam and they have one very hot shower session. We were just a little excited by this steamy scene -- check out our reactions in the clip below!

Another OMG moment was when Olivia managed to escape. She got a big CHEER from us after she clubbed one kidnapper over the head with a bathroom sink pipe and shot the other.

The newly-freed star ran towards the infamous red door in slow motion – the words of her father, friends and lovers rushing through her head. When she finally unlocked it, the biggest surprise of the episode was revealed ... she'd actually been held in a giant studio, complete with a projection screen displaying the Middle Eastern market.

So, who is behind the kidnapping? Her former cellmate Ian!

What did you think of the season premiere of "Scandal"? Sound off below.