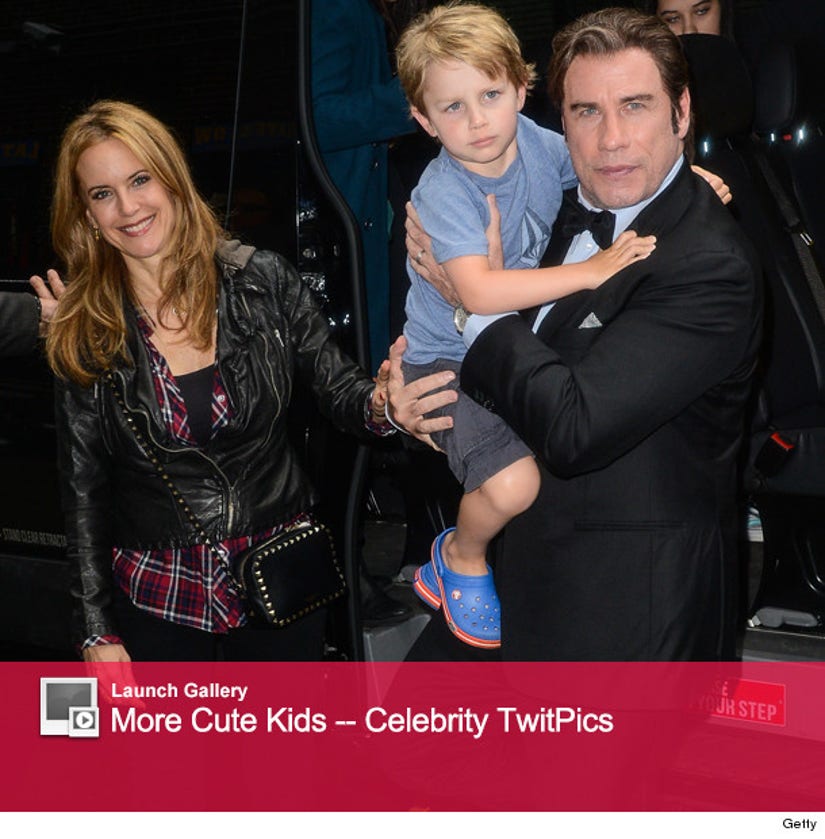 John Travolta made his appearance on the "Late Show" a family affair!

The 61-year-old actor brought his wife, Kelly Preston, and his son, Ben, to the taping of his late night appearance on Monday, where the little one made his big TV debut ... well, sort of.

When the actress tried to bring the four-year-old on stage, he wiggled out her arms and ran off to the side. Even though Letterman and Travolta tried to get him to come out, Ben wouldn't budge!

"I think there's a place for him on the staff," the late-night host said with a laugh. "What a beautiful kid. Oh my god!"

Check out the cute clip below to see what else John said about Ben!

Travolta has been creating a ton of buzz for recent comments surrounding the Church of Scientology. During an interview with "Good Morning America" on Monday, he was asked why there is so much intrigue about his religion.

"Mostly because it's not understood," he declared. "People really need to take time and read a book. You know? That's my advice. You could read 'A New Slant on Life,' you could read 'Dianetics.' And I think if you really read it, you'll understand it, but unless you do, you'll speculate. And I think that's a mistake to do that."

The "Pulp Fiction" star said Scientology has worked for him, especially with helping him cope with the death of his 16-year-old son, Jett, in 2009.

"Sometimes when something really works well it becomes a target," he continued. "Forty years, for me, I've been part -- and I've loved every minute of it. My family has done so well with it. You know? It's a beautiful thing for me. I've saved lives with it, and saved my own life several times. Through the loss of my son, it helped me every step of the way for two years solid, and here I am talking to you because of it."