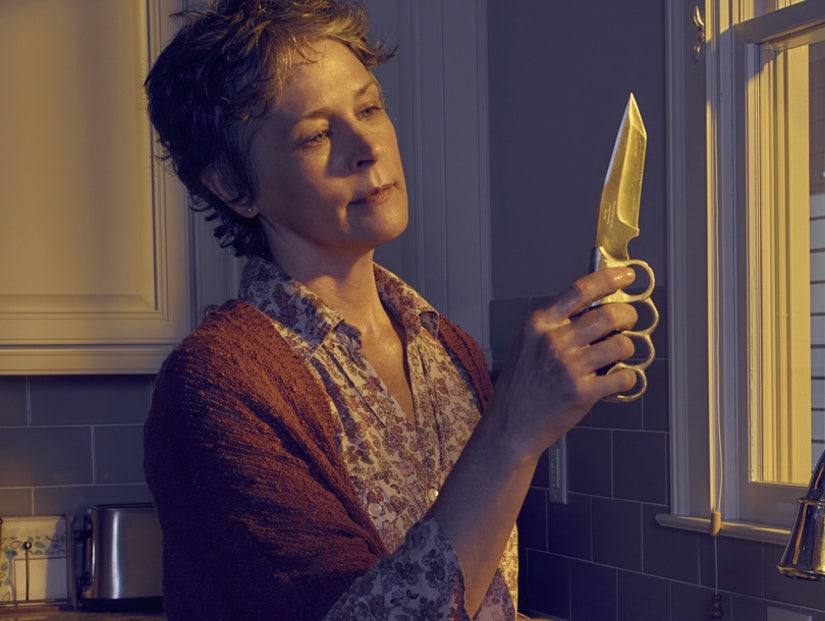 We're recapping your favorite show all season long on toofab, rehashing the best moments, goriest zombie kills and checking in with the show's stars to answer some of your biggest questions.

The best part? Eugene himself, Josh McDermitt, is spilling some behind-the-scenes dirt on what really goes on on set each week.

Ready to dive into this week's episode, "JSS"? Warning: Spoilers below!

This week, it really hit the fan, as Alexandria was attacked by a horde of horrific, blood-thirsty crazies -- but these ones weren't walkers!

The episode opened with some of Enid's backstory, as we see her fending for herself after her parents were killed by zombies. We saw her write the letters JSS in blood on her car window, from the bones of a turtle she ate and on her own hand in dirt as she eventually found and walked herself through the gates of Alexandria. What did JSS stand for? We wouldn't find out until the end of the episode.

While Rick, Michonne, Daryl and most of the show's strongest fighters were off trying to lead a large pack of zombies away from their supposed safe zone, the Wolves came out of nowhere and went absolutely insane on the good (but totally defenseless) townspeople.

The invaders were completely, bats**t crazy, hacking of limbs with axes, impaling Alexandrians and running through town with machetes. One thing in our survivors' favor: They had no guns.

We quickly found out what caused the alarm we heard in the season premiere. One of the Wolves was attempting to drive through their security walls with a truck -- but Spencer shot him from the sniper tower, making him crash and set off the blaring horn.

Morgan came to the rescue, telling Spencer to hide when he -- and almost all the other Alexandria residents -- clearly wasn't trained enough to fight back.

Carol then saved Morgan, slicing and dicing one of the Wolves after donning one of his unlucky friends' outfits as a disguise. While total badasses, Carol and Morgan clearly have different methods of defense; Carol acting with an Angel of Death mentality while Morgan pleads, "You don't have to kill people."

Carol also didn't care to try and save Gabriel when he was getting attacked. Luckily for Gabriel, Morgan came to his aid -- but Ms. Peletier then offed their captive in a run-by shooting before they could try and get any info out of him!

The Wolves retreated after Carol blew a ton of them away and Morgan used his Donatello moves on a group of them with a bo staff, one of the nasties grabbing a gun form a corpse as he ran off.

This whole time, Carl was holed up with Judith and Enid, who was acting sketchy as can be. After casually showing up to Carl's home amid the chaos, she said she was leaving -- then defended the Wolves by saying, "They're just people. This place is too big to protect. There are too many blind spots. That's how we were able to ..."

Carl cut her off before she finished the sentence. Did she mean how she and him were able to sneak in and out of the town last season ... or how she and the rest of the Wolves were able to infiltrate Alexandria?!

She did ended up bailing, leaving behind a letter for Carl that read "Just Survive Somehow."

In another brief scene, we saw Aaron find his recruitment photos of Alexandria -- detailing the security measures and layout of the town -- on one of the Wolves' dead bodies. Think his guilt will plague him a little next week? Probably.

This one was exciting hour that is sure to satiate fans who prefer a little more action in their "Walking Dead" episodes -- as well as have a HUGE impact on things to come.

We're also left with 5 burning questions, on everything from Enid to a potential love interest for Eugene. Keep reading and check out star Josh McDermitt's answers below!

1.) We need to talk about Enid. She's totally one of the Wolves, right? O.K., we know you probably can't say either way -- but what can you tease about her and the Wolves going forward?

I loved stepping into a little bit of the backstory with Enid. She's a wonderfully complex character. I kind of feel like she's the youth version of what Carol had become. And the triangle between Carl, Enid, and Ron is very interesting. There is so much not being said between Carl and Enid and yet it feels like they're saying a lot.

You're right... I can't say anything about Enid or the Wolves moving forward. What, do you WANT me to get fired?! Morgan letting those Wolves go had me shouting "Noooooo!" at my TV. And one of them picks up a gun on the way out which had me shouting, "NOOOOOOO!"

2.) We see a lot of Eugene this week, while also meeting Denise for the first time. How much fun is it working with Merritt Wever? You two play off each other really well — could Eugene be getting a potential love interest?

Merritt Wever is amazing. I was a big fan of hers from 'Nurse Jackie' and we had a few mutual friends, so when she came in, it instantly felt like she's been here for a few seasons. One of her first days of work was the scene where Holly was dying. It's a lot to step into the intensity of this show, but to be called upon to do some heavily emotional scenes first day is very difficult. But there was never any question that she belongs here. I'm so happy to get a chance to work with her.

In terms of a Eugene love interest... I think as long as he's rocking the Tennessee Top Hat there's always the potential. But are the fans clamoring for it? That's the million dollar question...

3.) Without Rick, Michonne, Daryl, et all around, Carol and Morgan really stepped up to the plate — and were total opposites. Will Rick be caught in the middle of these two going forward and whose side would you and/or Eugene be on?

I know myself, as a fan, am torn between Morgan and Carol. I want to see Carol kick ass and kill. But Morgan had one of Wolves pinned down and seemed like he was about to give some information -- he was saying something when Carol came up and shot him in the head.

As a fan, I was upset with Carol, but I definitely understand why she did that. As for Rick, he already says he doesn't take chances anymore. It'd be hard to believe he would be caught in the middle of Morgan and Carol, but you never know.

4.) With the exception of Aaron and Jessie, The Alexandrians were pretty worthless when it came to fighting — even compared to Eugene! With a horde of walkers heading their way from the ravine, how screwed are they next week?

The people of Alexandria need to step up. It's what Rick has been preaching since season 5. But in a sad way they now understand the threat of what is outside the walls. It's not just walkers or a horde heading their way. This world is different from what they knew, and unfortunately it took an event like this to open their eyes.

I think people are always the biggest threat. Walkers you can manage. You at least know that there predictable you know how they operate you know how they work. Sure, they can pop at a moments notice or come around the corner and bite you. The people have motivation, determination, and can be desperate. That to me will always be the bigger threat.

We'll see how the survivors face both those threats next week. Got any questions for Josh? Leave 'em in the comments below -- we may ask one next week!