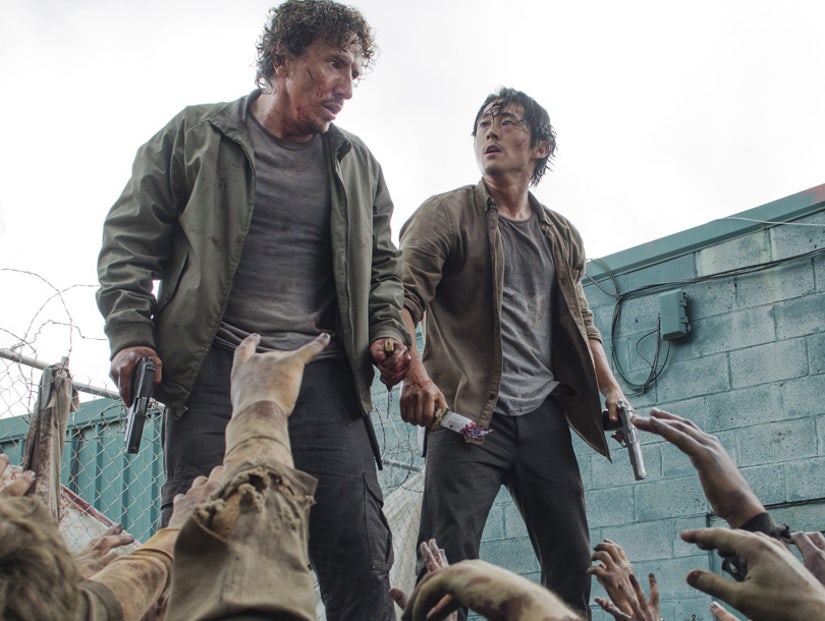 This week, we finally found out what really happened to Glenn, who was last seen screaming in the middle of a horde of walkers as they feasted on intestines. Tonight, we learned those insides weren't his, confirming online theories that the zombies were actually feasting on Nicholas' body as Glenn watched in horror.

So ... how'd he get away? Easy, he just crawled under the nearest dumpster and hid out until all the roamers slowly shuffled elsewhere. Look, we didn't want Glenn to die, but his escape seemed a little too easy -- how did he not get bitten at all?!? After such a crazy cliffhanger -- one that totally blew up on the Internet -- we can't help but feel a little disappointed in the payoff.

That being said, it's nice to see Steve Yeun's name in the credits again.

After emerging from hiding, he crossed paths with Enid, who acted all kinds of suspicious the entire episode. Glenn was determined to get back to Alexandria with Enid by his side, but she wasn't feeling it, and pulled a gun on him. Glenn easily took it from her, then started spouting some serious truth.

"You don't want to lose anything, so you give up and just say, 'That's what happens,'" he said, reading her. "You honor the dead by going on, even when you're scared. You live because they don't get to. You think your parents wanted you waving around a gun because you're afraid?"

Enid didn't want to chat, but later told him, "The world is trying to die, we're supposed to just let it." Ever the optimist, Glenn shot back, "You're wrong and I'm sure as hell not gonna let you die," while devising a plan to send a message to the survivors inside Alexandria.

While they were hoping to walk right into town, the horde surrounding the walls made that impossible. Instead, they sent a signal using green balloons -- a signal that made Maggie and the rest of the survivors extremely happy.

But then, everything went to hell.

One of the buildings supporting the outer wall collapsed, meaning every walker surrounding the town now has a way in. Now that's a cliffhanger!

With Glenn out of the way, let's circle back with some of the other story lines happening this week.

Rick, Michonne and Carol have a sit down with Morgan to talk about his no killing stance -- as all three of them have some serious issues with it.

"Why didn't you kill me, Rick? I pulled a knife on you, stabbed you. You let me live and then I was there to help," he tells them. "I don't know what's right anymore. I also know people can change, because everyone sitting here has. All life is precious and that idea changed me, it brought me back and it keeps me living. I thought about letting that idea go, but I don't want to."

The conversation ends with Rick asking if he really thinks he can make it, "without getting blood on your hands."

Carol later spies Morgan and Denise sneaking off together. The last we see of them is Carol asking, "What the hell do you have in that cell?" Looks like Carol's going to find out about Morgan's little prisoner next week.

Ron is about to become a pretty big problem for Alexandria ... or at least Carl.

After some shooting lessons, Rick gives Ron an unloaded gun to hold onto, so he can get used to carrying a weapon. We later saw Jessie's son steal some bullets from the supply closet ... and was spotted sneaking up on Carl with the weapon in hand right before the wall collapsed.

Is Ron ticked Enid got the hots for the young Grimes boy? Or is there something even bigger at work here?

We have a feeling Ron may be responsible for a certain something that happens to Carl in the comics. Anyone else?

In one of the dumbest moves of the night, Spencer thought he could single-handedly save the day by sneaking out of town, boosting a car and leading the horde away from Alexandria. He couldn't even accomplish the first step though and ended up getting himself and a bunch of other survivors in danger thanks to his incompetence.

After he was rescued, he was only worried about his "damn shoe" falling off. Rick fumed, snapping at him while yelling, "You got an idea, you come to me!"

Spencer then questioned whether Rick would have even listened. A fair argument, sure, but trying to pull off this mission by himself was just plain dumb.

And there you have it -- what did you make of this week's episode? Are you satisfied with the Glenn reveal ... or do you feel cheated? Sound off below!