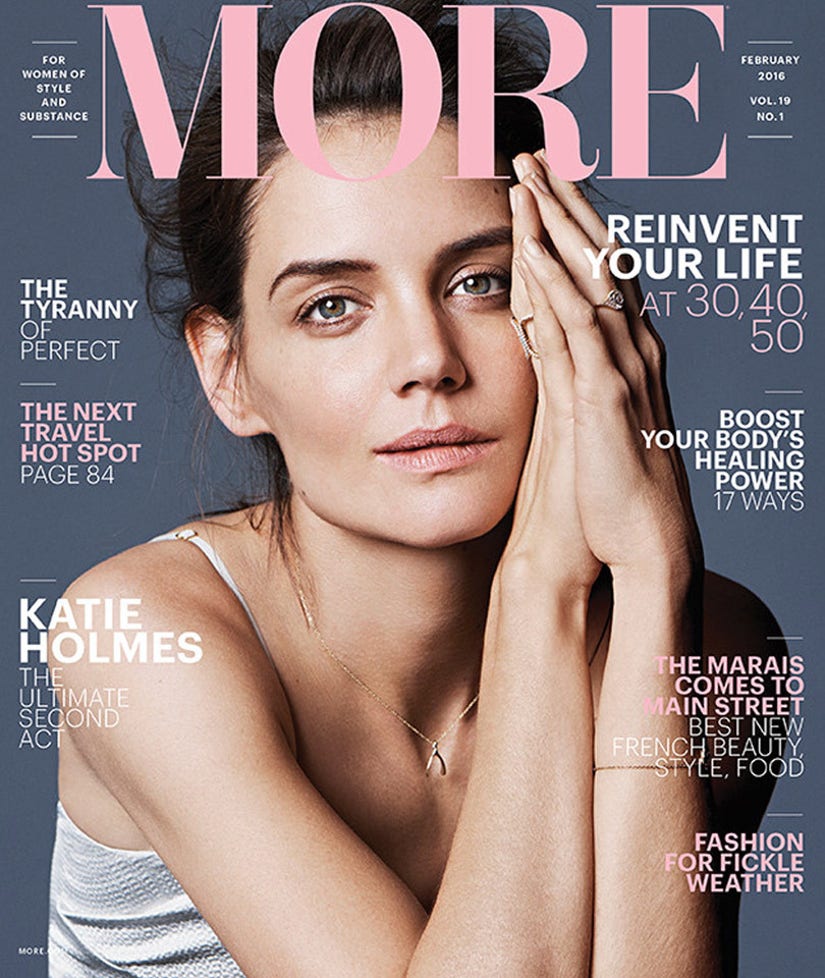 Katie Holmes is finally becoming exactly who she wants to be.

The actress covers the February issue of More magazine, where she reveals how she's changed with age, discusses her new directorial debut for "All We Had," and reveals the secrets of her success.

Holmes -- who looks stunning on the cover shot posing nearly makeup-free -- says that today she feels more "certain" about herself.

"I feel more creative. I feel ready," Holmes says of the new year. Noting that as a teen, she didn't have quite the same self-assurance.

"I had no life experience. I felt, 'I don't have anything to bring. I don't know what it's like to be, say, really angry. I'm doing the best I can,'" she recalls.

"But with age I've gained confidence," she declares. "I understand the kind of stories I want to tell. I have more experience in the business. I feel more certain."

Part of the 37-year-old's growth comes from surrounding herself with people she can gain something from. "I like to be around people who make me learn something," she admits. "I gravitate toward people who are doing things I don't know how to do."

"Being intimidated] is a waste of time," she continues. "Just ask if you don't know something. Ask. You're probably going to make a mistake. Get over it … Some problems are never going to be solved. So dance them off, and you'll feel better."

While the "Dawson's Creek" alum has no problem stepping in front of the camera, she's taken her career one step further this year directing her very first feature film and directing herself in "All We Had."

"[It] was like a marathon, but I didn't have time to second-guess myself," she reveals. "And it wasn't going to do anyone any good if I did. I stay calm. 'Oh, we only have one camera today? I thought we had two. OK, adjust.' It's similar to, 'We have no food at home, and you have to eat something soon. I have crackers in the bottom of my purse—that'll buy me 20 minutes.' Ha! You keep going, no matter what.'"

Holmes also reflects on her experiences playing a bipolar woman in "Touched With Fire," which will hit theaters next month.

"I gained a greater empathy for people who are struggling with mental illness," she says. "Before the movie, I'd hear something about it and think, 'Wow. But that's over there.' Unfortunately, we're quick to judge, especially in this day of social media and the Internet—which I think is an ugly-maker. Everybody looks ugly when they're on the Internet. But I wouldn't want to live a flat life, with no pain."

The "Batman Begins" star also has some solid advice when it comes to living a happy and fulfilled life.

"Focus on the positive. Stay creative. Go to things that interest you. Do work that's fulfilling. Challenge yourself. What's amazing about the human spirit, there are so many people doing inspiring things," she suggests. "If you focus on that, it makes your life richer."

There was, however, one thing she didn't want to talk about: Her love life, both past and present.

"That's not something I want to answer," she replied when asked about her dating life. "[I don't] have a five or 10-year plan. I feel like I'm still a teenager in a lot of ways. I do a lot of things I did then. I paint, I color. I cook sometimes. I still feel like a girl. I don't quite feel like a woman, maybe because I'm the baby of my family. I'll probably be 90 and feel like, 'Not a woman yet!' Ha!"

The writer who profiled Holmes, Johanna Schneller, also said Tom Cruise was off the table -- saying, "Holmes doesn't discuss that part of her life."

What do you think about Katie's comments? Sound off below and check out the gallery above to see more ladies of the '90s then and now!