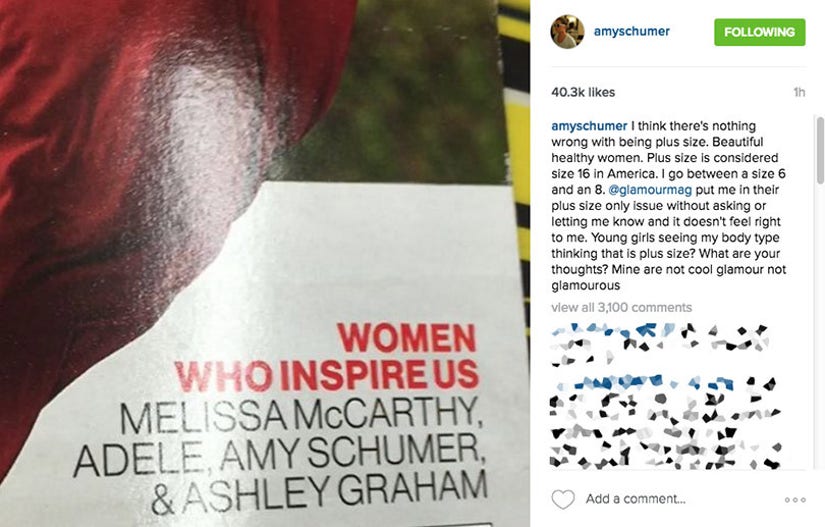 Amy Schumer has a bone to pick with Glamour.

The comedian took to Instagram this morning to call out the women's magazine for including her in what she calls a "plus size only" issue -- without talking to her about it first.

"I think there's nothing wrong with being plus size. Beautiful healthy women. Plus size is considered size 16 in America. I go between a size 6 and an 8. @glamourmag put me in their plus size only issue without asking or letting me know and it doesn't feel right to me," she commented on a photo from the issue.

"Young girls seeing my body type thinking that is plus size? What are your thoughts? Mine are not cool glamour not glamourous," she added.

With Ashley Graham on the cover, the special edition issue also shines a spotlight on people like Melissa McCarthy and Adele. The issue is one of two Glamour is doing via a partnership with Lane Bryant.

"First off, we love Amy, and our readers do too--which is why we featured her on the cover of Glamour last year. The cover line on this special edition--which is aimed at women size 12 and up--simply says 'Women Who Inspire Us,' since we believe her passionate and vocal message of body positivity IS inspiring, as is the message of the many other women, of all sizes, featured. The edition did not describe her as plus-size. We are sorry if we offended her in any way."

Schumer actually covered the magazine back in July 2015, opening up about body positivity.

"If a guy was like, 'I can get pu--y whenever I want,' that guy would be a dickhead. But to deny that there's a major difference is ridiculous. For women, we're taught to eat less until we disappear. And trained to believe that if you don't look like everyone else, then you're unlovable. And men are not trained that way," Schumer tells the mag. "Men can look like whatever and still date a supermodel. I'm proud of what I said. I think it's good to see somebody saying: I have a belly. And I have cellulite. And I still deserve love. And to catch the old D. And to not apologize."

What do you think of the controversy? Sound off below!