Robert Downey Jr. has the cutest number one fan!

The actor appeared on Wednesday's "Jimmy Kimmel Live," with his "Captain America: Civil War" costars Paul Bettany, Don Cheadle and Emily VanCamp. Before Downey was joined by his Marvel team, he dished on the new Spider-Man and his daughter Avri Downey.

"Would it be fair to say that you take being Iron Man very seriously?" Kimmel asked the actor, to which he confessed, "I don't take myself too seriously. I take that character, Tony Stark, very seriously."

And he's not the only Downey family member who supports Iron Man -- apparently his daughter is a big fan of the character too! Jimmy threw up a pic of his daughter Avri holding a the giant metallic hand. 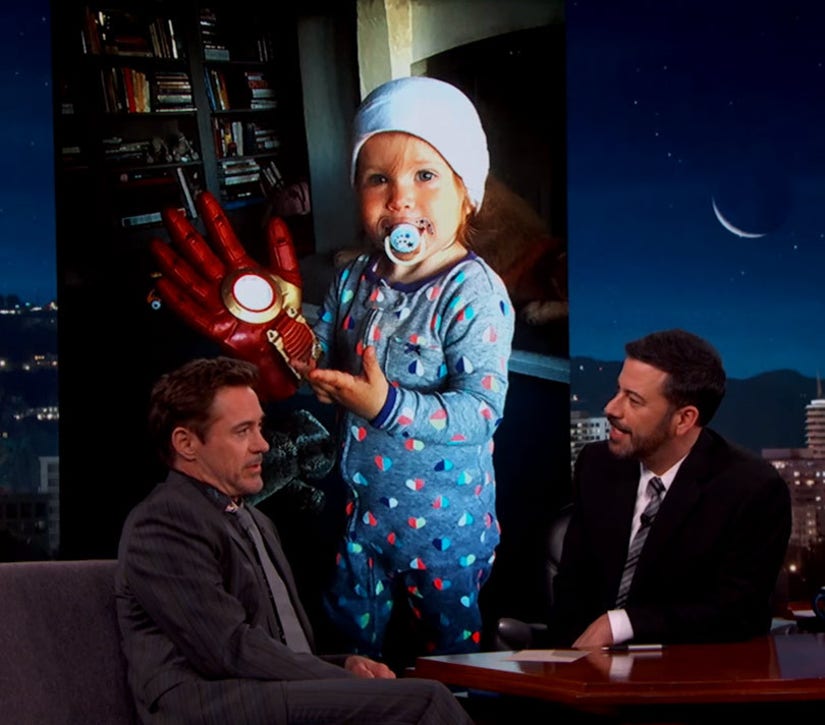 "You've got an Iron Baby there," Jimmy said. "That is adorable."

"She is something else," Robert gushed.

"I know we're almost the same age, but is there any chance you would adopt me?" Jimmy joked. "Because I would love to be a part of the Downey Jr. family."

After the candid convo, Downey was joined by a few members of the "Captain America" cast, where they revealed if they have ever taken home a souvenir from set.

"I would not be doing that with Marvel," Emily revealed. "They know everything."

"There was a massive Avengers 'A' which is outside the Avengers center. I have it. I said, 'Why is this in England? Send it back to L.A. I'll put it back in my office.' They said, 'Seriously?' I said, 'Yeah. I'll wait.' I'm supposed to share it," Downey admitted to Jimmy. "It's supposed to move around like an exhibit."

What do you think about the actor's comments? Sound off below and check out the gallery above to see more cute celebrity kids!