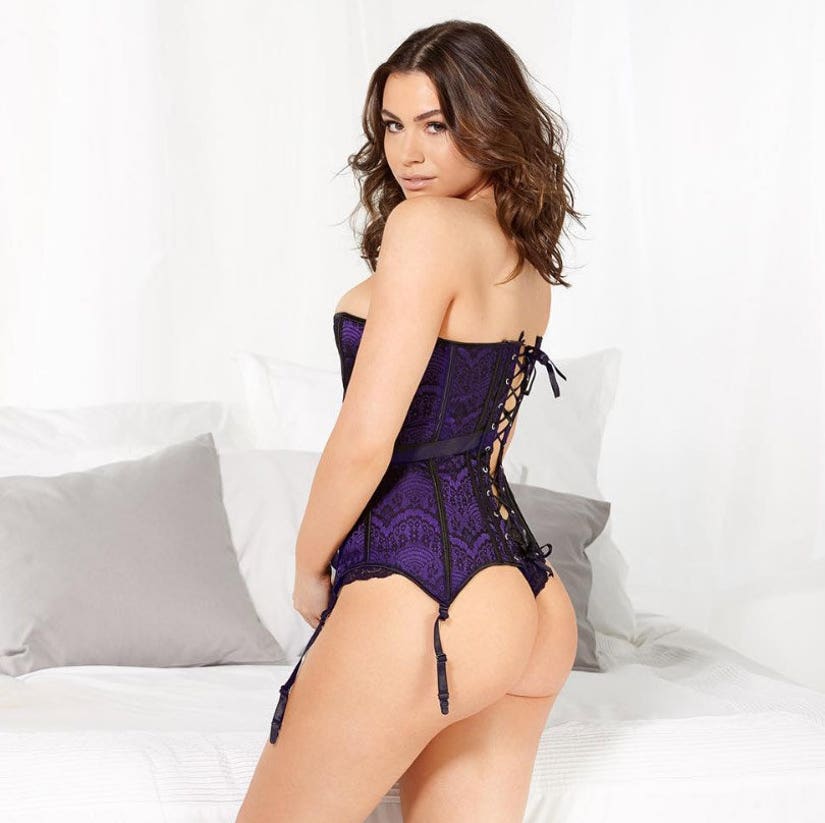 While the brunette beauty took to Instagram to call out the double standard applied to curvier models who show some skin, she tells toofab she just wishes women could support each other in all their endeavors.

Read on to see what she told toofab's Leah La Rosa about what she hopes to convey through the campaign, the backlash it created and what her dad thought about the racy shoot!

toofab: Congratulations on the Adore Me campaign. How did this first come about?

Sophie: The casting director from Adore Me actually told me a funny story about how she found me. I guess she had heard about me four different times in one week and took it as a sign that she just had to cast me. I thought it was a great opportunity to [show] this kind of body type in this area of lingerie that's so dominated by Victoria Secret.

toofab: Were you nervous at all about putting your body out there in this way?

Sophie: Oh yeah, absolutely. I mean I jumped at the chance and then immediately after I hung up the phone I was like "Oh my God, when was the last time I worked out? Oh no. Am I healthy? Am I fit? I don't know." So I immediately got in with a trainer at Body by Simone in Los Angeles and told them what I was going for. They are all about finding what health is for your body type and weren't interested in making me lose a lot of weight.

toofab: Did you set any goals?

Sophie: My weird goal was I wanted to be able to do a handstand and to do ten pushups in a row because I have never been able to do pushups, so that's how we kind of monitored my fitness progression as we went along. I trained for four weeks everyday. What was so interesting was that I really didn't lose that much weight training with them, but I replaced fat with muscle. Even though I weighed the same, my fat percentage was much lower. 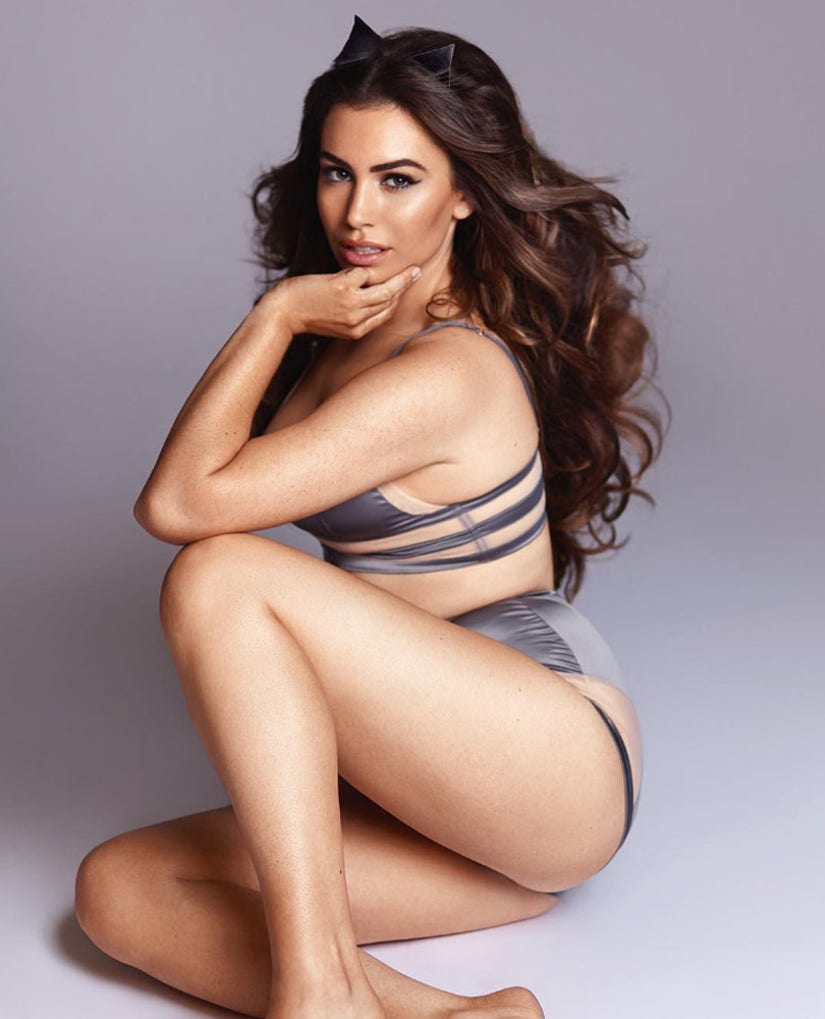 toofab: How did both of your parents feel about the shoot? Did they have different opinions on the photos?

Sophie: My dad was like "I'm so proud of you, but I never want to see you in underwear ever, so I'm not going to look at the photos." He was super supportive and he married my mom, who was a model, so he understood that sometimes you're modeling swimsuits, sometimes it's sweaters, sometimes it's lingerie.

My mom was like absolutely supportive. She was a model, so she was like "Girl, you better brush up on your catalog poses cause it's been a minute." So I studied up, reading every magazine I could get my hands on and looking at catalog poses for lingerie because it is kind of a different type of modeling.

toofab: Though you did receive positive feedback, you also received some negative comments as well – were you prepared for that at all?

Sophie: Yeah, absolutely. I think anytime you do anything regarding your body as a woman, it's always going to be a debate. It's silly in this day and age that that's even a thing. Somehow swimsuits are O.K., but underwear isn't, even though they cover about the same amount of skin. I knew there would be backlash and it didn't matter how I posed or how conservative I was or how sexy I was. People were either going to love it or hate it, and very few people were in-between the two.

toofab: Is there a message you would like to get out to other women from this?

Sophie: Yeah, I would say it's our right to do want we want in this country and that's such a special thing that we really take for granted. The fact the we're knocking people down for taking advantage of their rights as women is ridiculous. That's not what being American is really. I just want to point out that it's a choice whether we model or not, or what you do with your body or not, and we should just respect that and say "Maybe, personally, I wouldn't do it, but good for you" or you know "Maybe I wouldn't model lingerie, but that's awesome that you're doing it and that's awesome that you're showing a different type of body." 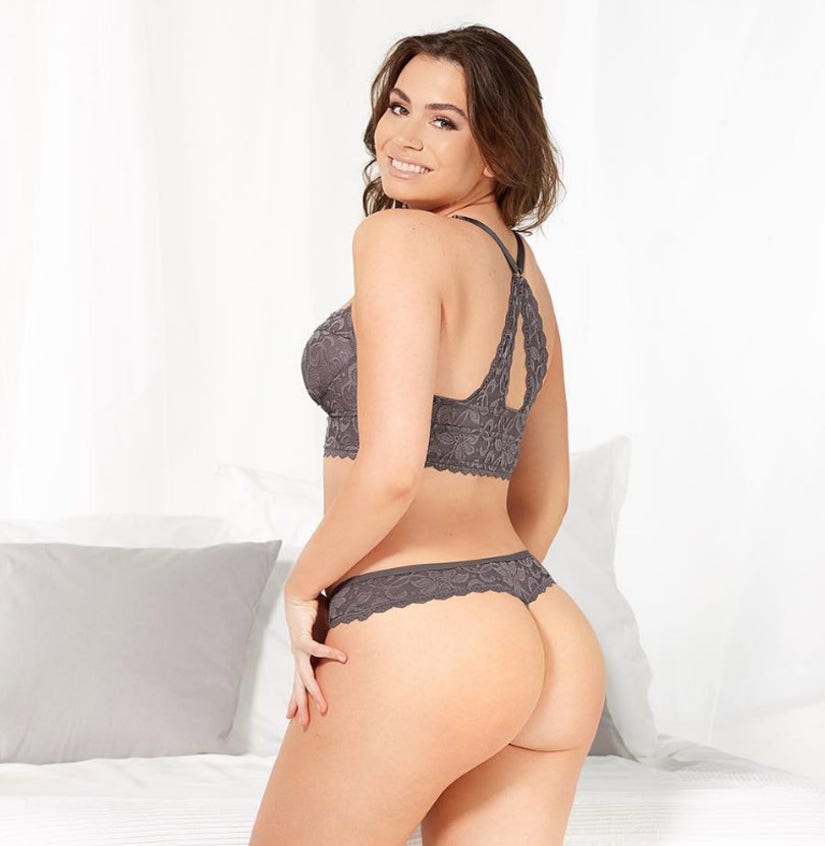 toofab: What have you taken away from this experience?

What I really like is starting a dialogue with people on social media about what body image is, what feminism is, and how we can learn to empower one another even though we may not agree with each other.

toofab: We love your #AllBootyCreatedEqual hash tag. With Ashley Graham, and other body-positive campaigns out there, do you think we're seeing a shift in mainstream modeling?

Sophie: I do, but I think there's still the token curvy girl or the token "real girl." I hate using that word because everyone is a real girl. What I love about Adore Me is I didn't feel like the token curvy model. They just had all different types of girls shooting this campaign because they liked who they were as people and thought they could do the job the best.

Sophie: I hope so and I was happy to hear from Adore Me that I'm one of the top sellers on their site and I think that says a lot about the shift in the modeling world and who people want to see and who they want to buy clothes off of. Me, personally, I would rather buy clothes off of a girl who I admired. I love girls like Karlie Kloss, even though she's straight sized, because she does so much to give back to her community and she really educates people. I think that's what models are these days, they're role models.

toofab: What are your plans moving forward in your career as a model?

Sophie: Well, I've become sort of addicted to the Body by Simone classes and I'm going to keep doing them because they're so much fun. I have this goal, my birthday is on July 7th, and I'm really trying to run a mile in eight minutes or less.

For the modeling side, I'm going back to New York at they end of July and I'm going to start meeting with more brands and hopefully kind of spread this message. Even if they don't hire me, just the fact that they're taking meetings and taking notice is a super important step forward for the modeling world.

toofab: Final Q, do you have a message to young girls struggling with body image issue or are flooded with this constant image of the "perfect girl"?

Sophie: I think what a lot of people don't realize is body image is so much a mental issue rather than a physical issue. How you feel about yourself is really what body image is all about. It's not about being thin or curvy, it's really about your mental health.

I would say to young girls to really check in with themselves everyday and make sure that they're not feeling too down, because social media can really do that to you. There's a lot of stimuli out there and I think carefully selecting the people you follow can really help set that positive mindset for you at the beginning of the day, when you're scrolling through your feed. That's what I try to do, is follow people that inspire me.