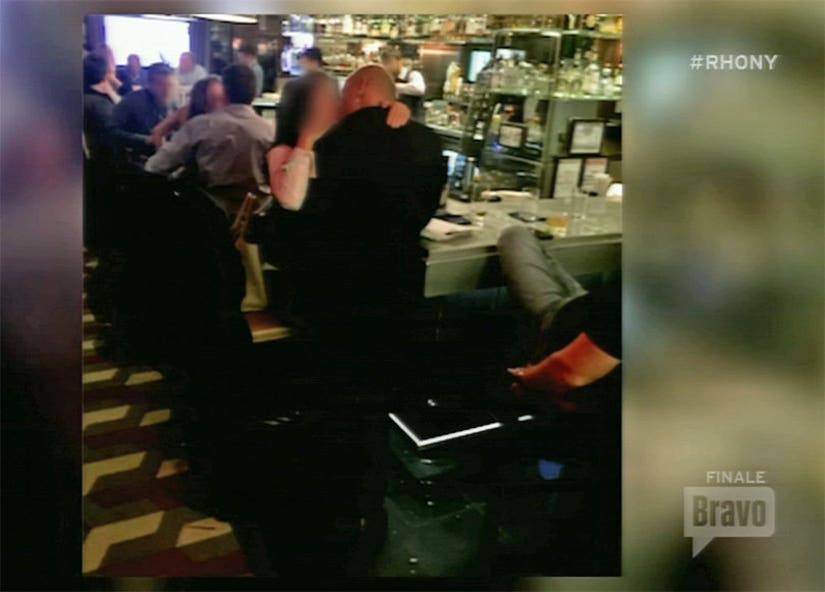 The Countess got some very bad news during what was supposed to be a celebratory time in her life.

On Wednesday night's finale of "The Real Housewives of New York City," Luann de Lesseps got concrete proof that her fiance, Tom D'Agostino, was getting hot and heavy with another woman during their engagement.

Costar Bethenny Frankel was sent photos by a friend showing Tom locking lips with a mystery lady -- who was definitely NOT Luann -- at a bar in NYC (above).

de Lesseps called her beau immediately, but he wasn't too forthcoming with the details ... mainly because he says he was so drunk, he didn't remember much. Watch her confront him here.

And while de Lesseps was definitely ticked, it was Frankel who had a total meltdown during the episode. After delivering a crippling blow to Luann, Bethenny made it all about herself, freaking out over being the bearer of bad news.

Despite Luann having evidence of her man stepping out on her, the two are still going ahead with their planned nuptials. The "RHONY" star opened up about what she says really went down on "Access Hollywood Live" yesterday ... and why she took him back.

"It was rough, the way Bethenny told me, instead of pulling me aside, saying look, Luann, this is what I've got. She just put it out there, I was totally shell shocked and devastated, and of course Tom is devastated because it was a mistake, he is a guy," de Lesseps says. "He made a mistake. Obviously it was a bad mistake."

"Tom and I have, you know, worked through it. It's been really rough on us. But we are in love with each other," she continues. "So the good news is that we got through it and we're getting married and I'm not going to let that stop a beautiful relationship and a beautiful future together. People make mistakes. If you can't forgive the people you love, who can you forgive? I love Tom. That's what we are doing, we are getting married and I am going wedding dress shopping now."

Luann adds that the two got into a fight during the night in question and he "went out and drank like guys do" ... that's when the makeout session happened.

"I think it was a moment of weakness. I think it happens to people," she explains.

What do you think about her decision to go ahead with the wedding? Sound off below!