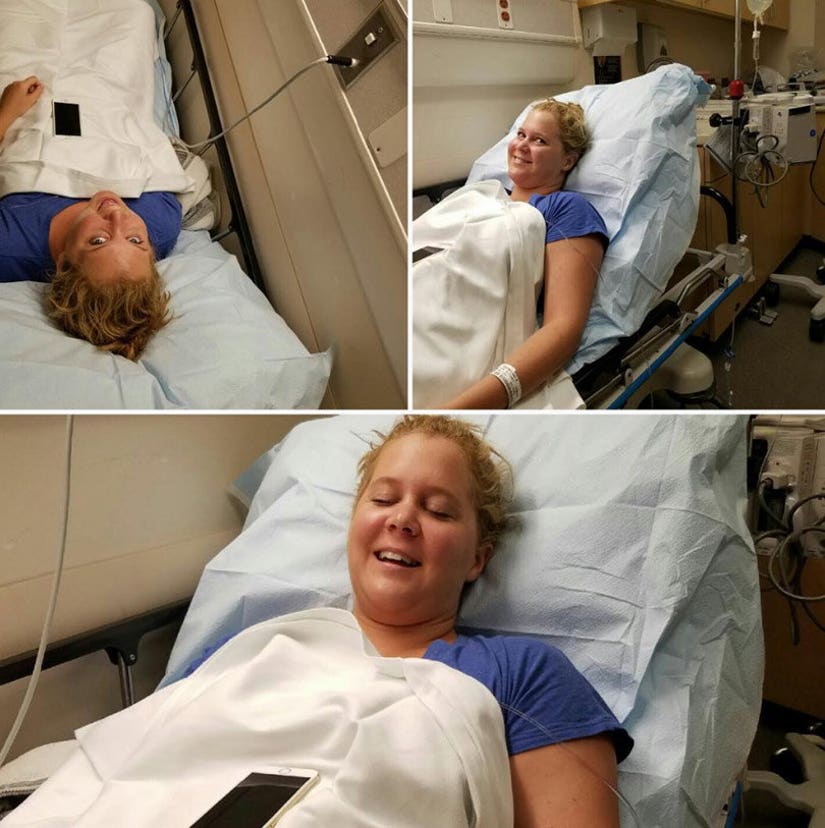 Amy Schumer was hospitalized with food poisoning in Paris—and, true to form, she took to Instagram to hilariously document the ordeal.

The "Trainwreck" star first revealed that she and boyfriend Ben Hanisch were feeling under the weather in a post on Monday that showed the couple curled up in bed.

"Thanks for everything Paris! Except the food poisoning. #nooooooooooo #balmain #nyfw," Schumer captioned the shot.

Not too long after that, she shared a video of herself out of her sick bed and getting some much needed nourishment by a window with a view of the Eiffel Tower.

"Trying to eat chicken broth post puke fest," she wrote of what would have otherwise made for a picturesque post.

But it seems the chicken soup didn't exactly do the trick, because just a few hours later, the comedienne shared a posted collage of herself clad in a blue hospital gown and laying in a gurney.

"No red flags with this girl," she captioned the series of shots, where she's all smiles.

And as if to assure her fans that she was indeed in good spirits—if not in good health—the 35-year-old even took the time to post an online dating video spoof from her hospital bed.

"Hi, OK, this is my first time making one of these videos, but, you know, it's a new time," Schumer says in the video. "My name is Amy. I'm 35. I love just grabbing life by its horns and experiencing everything. I love music and food," she said. "I really just want someone to share all of that with. So, I'm taking a chance."

Not a bad idea, considering she was hospitalized in one of the most romantic cities in the world, but we're not sure how Hanisch felt about the video!