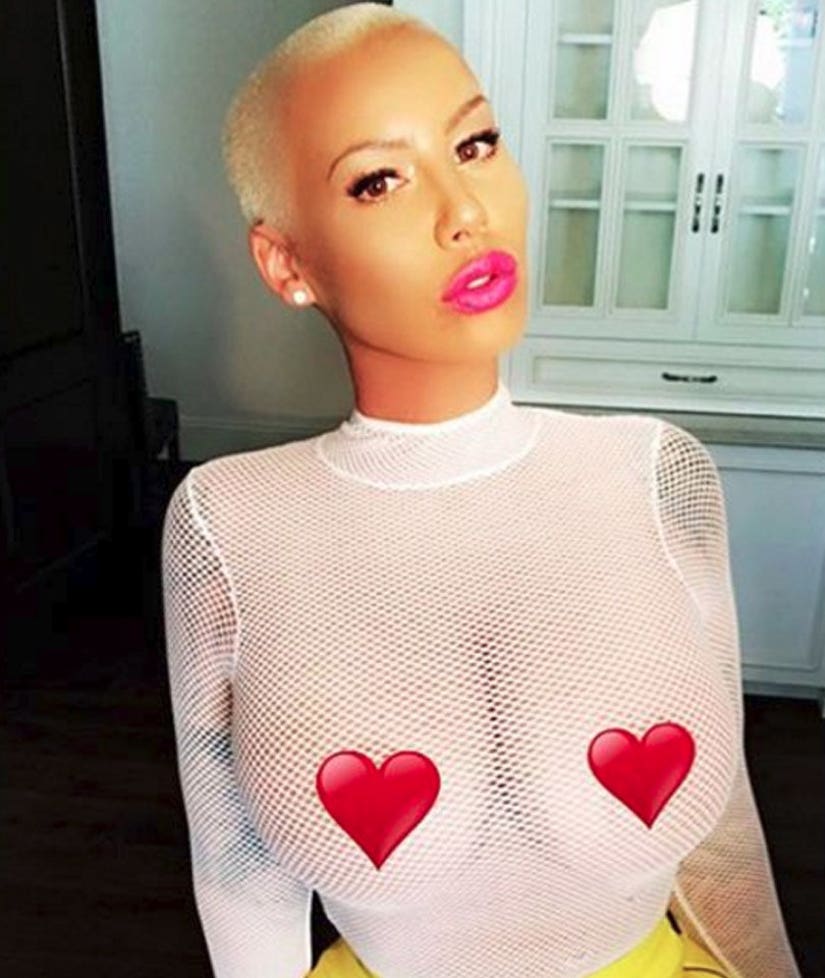 No bra, no problem!

Amber Rose took to social media on Thursday night to flaunt her famous curves on Instagram.

The "Dancing with the Stars" contender posted a pic of herself in a sheer fishnet turtleneck and a short fitted yellow skirt, which cinched in her enviable waistline.

The pic didn't leave much to the imagination, as she preserved her modesty with two strategically placed heart emojis.

The 32-year-old mama recently admitted she's dropped some serious weight since joining the ABC reality competition -- and she's clearly happy with the results!

"I feel like I'm getting super toned," she said on "Loveline With Amber Rose." "I feel like I've lost probably 10 pounds, maybe 8 pounds already. It's serious!"

While she's definitely feeling herself these days, someone else wasn't wasn't feeling one of her recent dances routine on "DWTS." In late September, Rose accused Julianne Hough of body shaming her during her critiques.

"They did the commentary, and I, it was a point in the dance where I had to lift my leg up and Maks dipped me & [Julianne] said, 'Oh, I'm uncomfortable,' and instantly I felt, I did feel body shamed," Rose said of the judge. "Me, and my body, my hips, my ass, my breasts made her uncomfortable."

Hough later addressed the comments on last week's episode, as the two buried the hatchet.

"The thing that I love so much about dance is that dance is a universal platform for people to express themselves," said Julianne. "Whether that is age or height, body shape, ethnicity, sexual orientation. It is something that people can express themselves to do. And for me, I am a huge supporter of that and that alone. As a judge on this show, I am here to solely judge you and everyone else in this competition for only the dancing. So I want you to know that."

The "DWTS" contender later took to Twitter to ensure her followers knew Hough had apologized.

Rosebuds! @juliannehough did apologize to me for the way her comment came off. The crowd was clapping loud at the time #GirlPower ❤️

What do you think of her recent selfie? Sound off below!