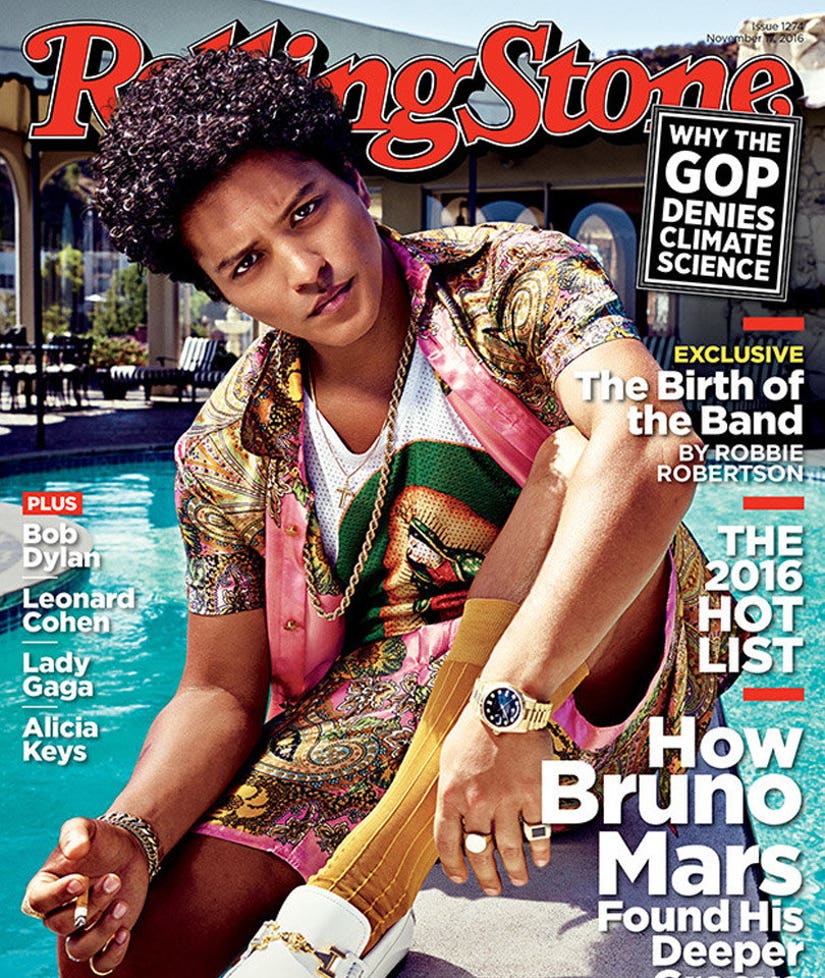 There's no beef between Bruno Mars and Kanye West.

Mars covers the new issue of Rolling Stone magazine, where he opens up about dealing with Kanye after he dissed his MTV Video Music Awards win and working with Beyonce at the 2015 Super Bowl.

Bruno won the Best Male Video for his hit single "Locked Out of Heaven" at the 2013 MTV VMAs. Kanye, being Kanye, later West went on a rant about Mars' accolade by saying that only "pretty" people in Hollywood win awards.

"I won one award!" he tells Rolling Stone with a laugh. "But he was right about the pretty part. It's Kanye – bottom line, at the end of the day, we need Kanye. But what he said wasn't a sting. You can come at me all you want – I've set myself up for that. But I am my own biggest critic. Whatever anyone says to me, they don't know s--t."

"But me and him, we're cool," the "Uptown Funk" singer adds. "He called me and apologized. Kanye loves me, man. You know that. Who doesn't? I'm Bruno Mars!"

The pop star likewise opens up about working with Beyonce for the 2015 Super Bowl ... a gig Bruno says took some convincing. In fact, when Coldplay frontman Chris Martin first asked about the show, Mars turned him down.

"'You and Beyoncé, doing 'Uptown Funk' – I want to be responsible for giving that gift to the world.' That's what he said, in his sweet, charming, English way," Bruno reveals.

Finally, Chris asked the "Gorilla" singer to meet him at the studio, where eventually they filmed a video of them asking for Beyonce's opinion about the performance. And to everybody's surprise, Queen Bey was down.

The pop star likewise says he learned a lot about stage presence from the "Lemonade" singer.

"She's not f---ing joking around," he explains. "She's going to get onstage and show everybody why she's the best every single time. She's got that monster in her."

But Mars does have one hilarious memory of collaborating with the singer before their halftime show.

"Me and Beyoncé were both working on our diets, stressing out," he reveals. "Then the day before, we're watching playback backstage, and she's eating a bag of Cheetos. I'm like, 'That's what you're doing?'"

"She's like, 'There's nothing more we can do these last two days. It's gonna be what it's gonna be. So I'm gonna enjoy this bag of Cheetos," Mars hilariously recalls.

It definitely sounds like, in the end, the 31-year-old singer was happy about his decision to do the Super Bowl.

What do you think about Bruno's comments? Sound off below and check out the gallery above to see more pop stars then and now!