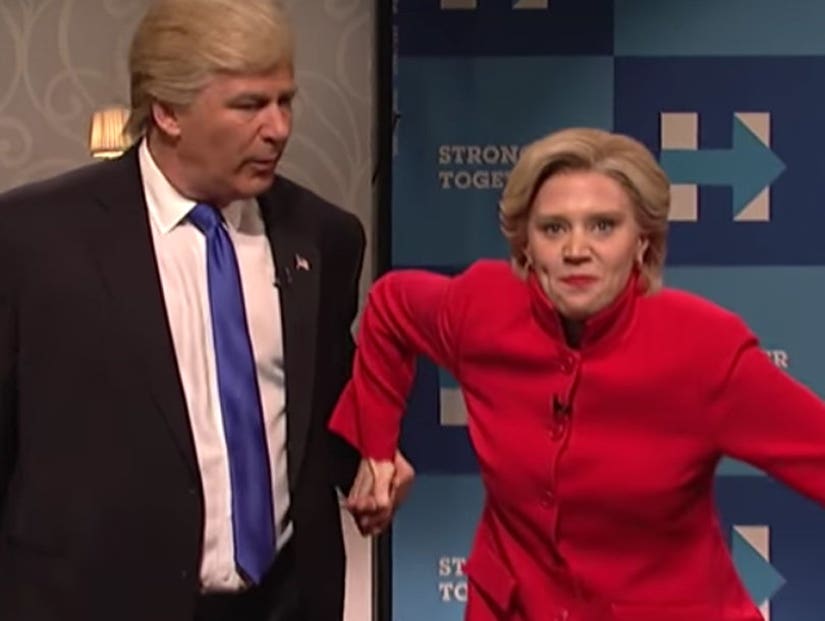 It ain't over till it's over!

"Saturday Night Live" took their last opportunity to slam the presidential nominees, Donald Trump and Hillary Clinton, during last night's show, and this time, the segment was bigger, longer, and more hilarious than ever.

When asked by Cecily Strong -- as faux CNN anchor, Erin Burnett -- how the "candidates" were feeling this week, Trump -- portrayed by Alec Baldwin -- and Hillary -- played by Kate McKinnon -- offered up their funniest answers yet.

"Trump" said, "Really, really great, Erin. They're all still buying it." McKinnon, who does a knock-'em-dead impression of Clinton responded in kind, "It's been a great week for me, too. My fav part was when I lost that big, huge lead I had, but I'm not worried, Erin. It might be the bottom of the ninth, and it's tied and it's raining, but this old Chicago Cub is still gonna bring it home."

Baldwin simply responded, "You are not, Hillary," and waved his hands in his customary way.

The best moment however was the end of the clip, when the two broke character to address the audience about the "mean" election. "I feel so gross all the time," Baldwin, as Baldwin, said. "Don't you guys feel gross about all of this?"

The two then ran amok through Times Square in their costumes, hugging Trump supporters while handing out balloons.

Check out the hilarious clip below:

Later in the episode, Dana Carvey reprised his "Church Lady" role, and voiced his thoughts on the election. Carvey said, "Well, it's a tough choice we have on Tuesday, don't we? Do we vote for a bitter, female android from the '90s, or a riverboat gambler with a big tummy and an orange head?"

"Jesus is not on the ballot, Colin," the Church Lady admonished. "I suppose you're going to write-in your favorite candidate, Colin ... Satan!"

Carvey continued, "I never lose hope, Colin. What a lovely little country we have here. Sometimes, I look around and I think to myself, what a wonderful world."

The Church Lady then broke into a hilarious rendition of Louis Armstrong's "What a Wonderful World."

Watch the video -- it's Dana Carvey at his best, and a must-see clip:

Weigh in with your comments -- was this the best election-style "Saturday Night Live" yet? And what did you think of Carvey's "Church Lady" reprisal?