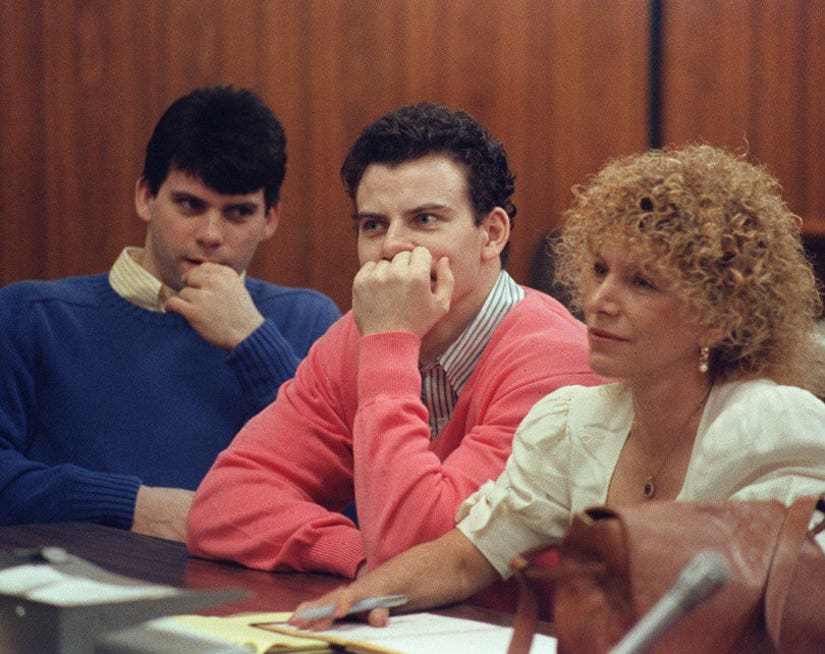 "My name is Lyle Menendez. I've been in prison for 26 years."

Chilling words to hear from one of the Menendez Brothers, who is speaking out about murdering his parents for the first time in 20 years.

"I am the kid that did kill his parents and no river of tears has changed that and no amount of regret has changed it," Lyle told ABC News. "I accept that. You are often defined by a few moments of your life, but that's not who you are in your life. Your life is your totality of it… You can't change it. You just, you're stuck with the decisions you made."

Lyle and his brother Erik are currently serving life sentences without parole for killing parents Jose and Kitty Menendez in August 1989. They were both convicted of first-degree murder on March 20, 1996.

Here are TooFab's takeaways from the released interview excerpts:

"I'm very different than I was as a late teen, simply by way of the fact that just a huge weight off my shoulders having gone through this trial, having been able to talk about what happened in my family," Lyle said. "I don't live for the future now. I just sort of ... I just take each day, short-term goals."

"My life is a struggle [to] not to be defined by what happened," he added. "I'm at peace with my life growing up. I'm at peace with it, because I've just sort of accepted [that] it's okay not to understand."

"It's shocking to think … that I could have been involved in taking anyone's life -- and my parents' life… it seems unimaginable because it seems so far removed from who I am," he told ABC.

Lyle Is Proud of His Brother ... But Hasn't Seen Him

The two brothers haven't seen each other since a 1995 interview with Barbara Walters and, according to Lyle, they've "almost never talked" about the murders. It's "just too overwhelming," Menendez admitted.

"I really wondered, separated from me and so on, how would he do?" Lyle mused. "It's just amazing to me that you can come from such terrible circumstances and then be grow up to be someone who is so empathetic, so I'm very proud of him."

Lyle told ABC that Erik now works with terminally ill and physically challenged inmates while he serves his time in Pleasant Valley State Prison in California.

Both of the brothers have found wives while behind bars. Lyle tied the knot to model Anna Erickson in 1996, before marrying Rebecca Sneed in 2003. His brother has been married to former pen pal Tammi since 1999.

"I've found I can have a healthy marriage that is complicated and built around conversation and finding creative ways to communicate, sharing, without all the props that are normally there in marriage in terms of going out to dinner and having as much intimate time together and so on," Lyle explained to ABC.

In California, conjugal visits are strictly off limits to those sentenced to life terms without parole.

"One thing I've learned is that your physical comfort is much less important than your connection with the people around you," added Lyle.