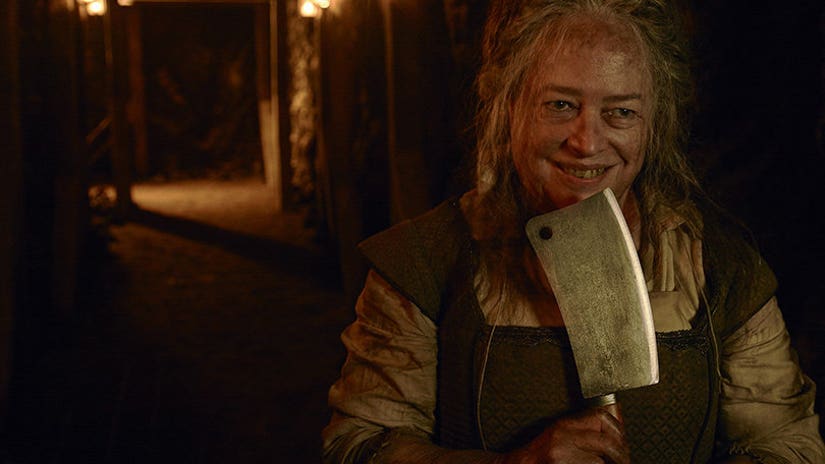 Before Thursday's TCA panel for FX, CEO John Landgraf revealed the network ordered two more installments, in addition to the previously announced Season 7. Co-creators Ryan Murphy and Brad Falchuk will both return for the new season, airing later this year.

"American Horror Story launched the modern limited series revolution and – as evidenced by the most recent installment 'Roanoke' - it remains as vital today as when Murder House stunned audiences six years ago," said Landgraf. "Each new chapter is a cultural event, beloved for every new twist in imagery, style, cast and plot. We are thrilled that Ryan Murphy, Brad Falchuk and the entire creative team will continue to deliver the groundbreaking, celebrated American Horror Story for years to come."

But don't expect any theme reveals anytime soon. "It will still be shrouded in secrecy," Landgraf said during the network's panel.

"We know explicitly what seventh season is about, but not eight and nine," he added. "I'm really excited about season 7, and utterly confident that eight and nine will be unique and interesting."

After talking about his new show "Feud," Murphy himself chimed in with a very tidbits as well. Not only did he reveal the season will be set in modern times, but both Sarah Paulson and Evan Peters will return.

"There are only three people in the world who know what [the new season is about]," he added. "And that's FX CEO John Landgraf, [studio executive] Dana Walden and Sarah Paulson. I don't know [if we'll keep it quiet]. Last year was successful. I don't know if we'll do it again. I think maybe we'll release some of it earlier than we did. But I just started writing it, I haven't even cast it yet — except for Sarah and Evan. It's a modern-day story. That's all I can say.”