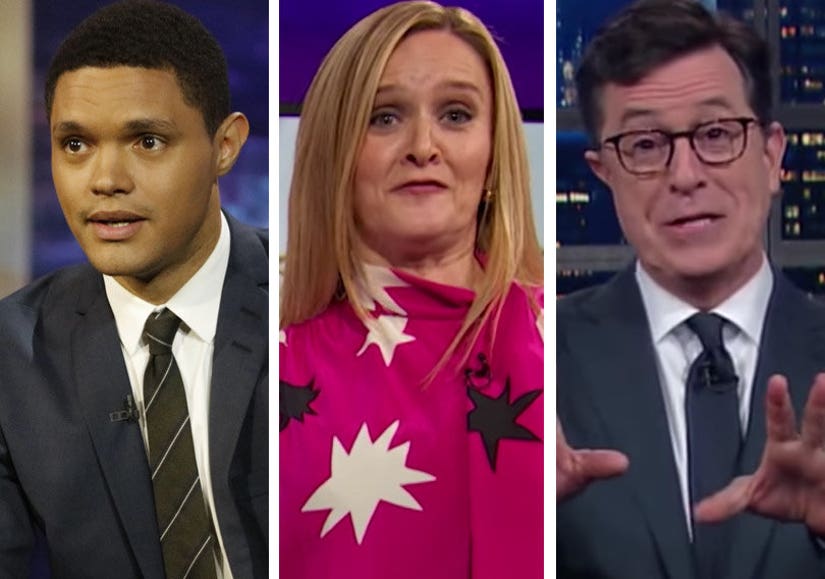 The elicit details released in the Trump-Russia dossier are completely unverified, but were also completely unavoidable when it came to jokes for late night hosts on Wednesday night.

Stephen Colbert, Samantha Bee and Trevor Noah all couldn't resist cracking a ton of jokes in their first monologues since the unsettling allegations against the President-elect were released.

While Stephen Colbert didn't get into the details of the report, he made many a pun in relation to its contents.

"I'm not going to validate that report by sharing the most salacious details from it," he said at the top of his show. "Even the detail everyone's talking about, OK? You might call it the the Number 1 detail."

"I think this is just an unfortunate leak that's making a huge mess," he joked. "And I know I'm being a wet blanket, but reporting on this is the worst kind of yellow journalism. Even though jokes about this story are a golden opportunity, I just, I won't do it!

But he sure did.

"It flooded Twitter. We'll keep you up to date as facts trickle in," he continued. "We have our best researcher working on it. She's a real whiz. And one thing is for sure: the president-elect is a Goldwater Republican who truly believes in trickle down."

"So no, I'm not gonna make any jokes, not even a wee one," he concluded. "So I'm cutting it off now. I am finished ... wait, a little more is coming out. It happens sometimes."

Over on "Full Frontal with Samantha Bee," the host went in a far more direct route.

"The only verifiable thing about this report is how much joy it gave me," she explained. "The true victim here is that memory foam mattress, it can't ever forget."

"There's a high probability this story is bulls--t, but the fact that it's plausible bulls--t is a terrifying statement about what our nation has come to," she continued.

She then referenced Donald calling Isis "number one tricky" during his press conference. "Interestingly enough, Number One Tricky is also the name of the Russian escort service Trump uses," she joked.

Her closing: "A spoonful of hooker urine helps the treason go down."

And on "The Daily Show with Trevor Noah," the host was just in total shock.

After talking about how he had to explain "golden shower" to his African relatives, he joked about the hypocrisy over the reaction to the report.

"I personally think it's terrible that people are spreading an unconfirmed rumor, it's disgusting," he sarcastically said. "It would be like suggesting that President Obama was a secret Muslim born in Kenya ... or suggesting that Hillary Clinton was a murderer, or saying that Ted Cruz's father killed John F. Kennedy."

"How could anyone justify spreading rumors they know are completely false?"