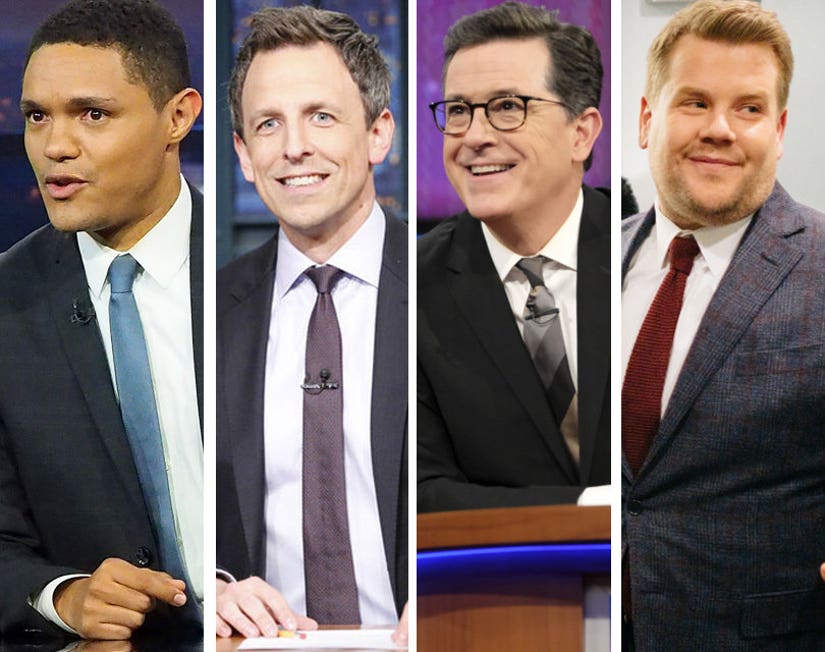 Trevor Noah, Seth Meyers, Stephen Colbert, and James Corden each took aim Monday night at President Donald Trump's immigration ban. Though the late night hosts presented humorous hot-takes on the situation, the collective consensus that this is no longer a joke and this is now Trump's America.

Noah started his "Daily Show" broadcast directed toward explaining the situation to the ONE person that may have been left out of the news this weekend, perhaps under a rock, or just wasn't paying attention: Donald Trump.

“That's how bad the Donald is. No matter how bad the situation you're in, Donald Trump can always make it worse," Noah said.

He also discussed the specifics of the immigration ban with one of his correspondents (and a practicing Muslim) Hasan Minhaj, who said he “wasn't surprised."

“Previous presidents have implemented similar policies, he said. “Trump is just taking this thing to a whole new level.”

Minhaj then joked at how beautiful the situation actually is, citing that "Muslims were PRAYING at the AIRPORT and people were CHEERING them on." Surely, an uncommon sight in a scare-driven state of America.

Over at NBC, Seth Meyers addressed Trump by saying that the ban is not about religion, but rather keeping the country safe, and that he seems pretty sure that even Trump was confused about his own executive order.

Colbert's CBS "Late Show" has not aired for a week, so this was his first broadcast since Trump's inauguration.

"You've got to give the guy credit. He can really get a lot of stuff undone," Colbert said. "From Obamacare to climate change to torture, he's already moved the country back to 2004. If this keeps up, pretty soon I'm going to launch 'The Colbert Report.'"

James Corden shared a home-made video of himself moving easily through a post-ban trip at LAX which ended in a black screen and text stating: "Today, James flew out of Los Angeles. So all of our shows this week have been pre-taped. Freedom of movement should be this easy for all legal immigrants. Not just the white and Christian ones."