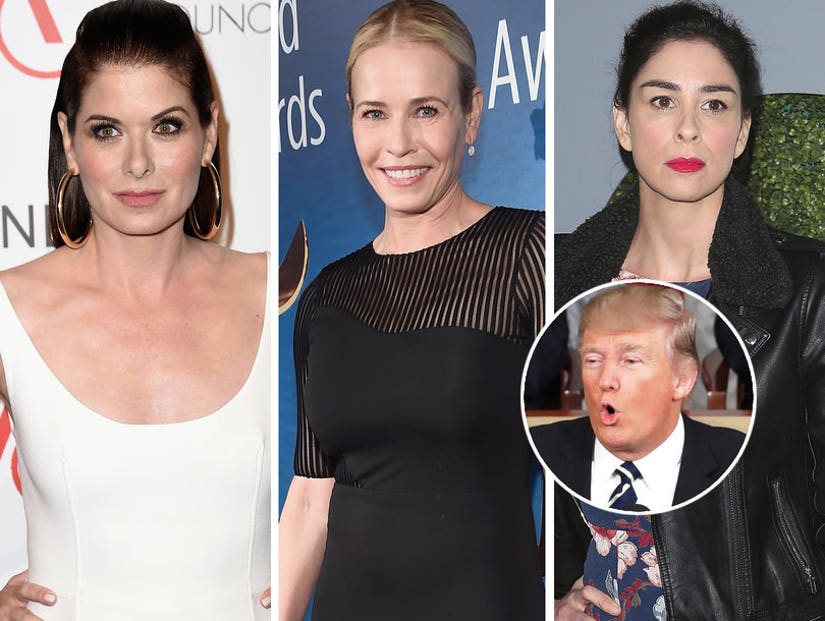 Across cable news, Trump's speech is being lauded as "more optimistic" and "populist in tone" with many political pundits calling the speech a "reset" after his first tumultuous few weeks in office. But Hollywood does not seem convinced nor ready to fully embrace POTUS yet if at all, and were quick to voice those opinions.

See how Hollywood reacted to Trump's address below:

One speech and now he's all of a sudden presidential? The bar has been set so low that all ya need is kne speech and we forget everything?

The Democrats probably aren't standing because their feet are so sore from all the marching. #DontGetTrumped #JointAddress

Im gonna be honest & say that this is most likely an untrue statement but Donald J. Trump has baggy vagina lips on the small of his back

Who's the boob reading #PresidentBannon's speech?

Pay attention: "Access to healthcare" is not healthcare. I have "access" to Ryan Reynolds. But he's not covering me.

Now the lying begins w/ his "jobs" creation since Jan20. Please-is there a network who'll run a crawl w/ the facts @ the bottom of screen?

blowz my mind,
that the world
is on pins & needles,
salivating
to suffer the drivel
from a simpleton,
Ho-ass piglet fraud
like you.
© pic.twitter.com/FSNKuVKDYM

Since I put my shoes on correctly this morning I'm officially qualified to be president now.

Bottom line: Trump's #JointAddress was Steve Bannon on steroids with a smile.

respect trump when he respects women, muslims, journalists and dissenters. not a fucking moment before.

President Trump spoke tonight with a different tone and different approach than the inaugural. Spoke to all of America. #JointAddress

Beautiful story about perseverance about Megan Crowley & her father. FDA process is slow. Trump is right about that. #JointAddress

What if a stack of vague bumper stickers believed in itself so much that it gave a speech?

I can't watch this garbage anymore. The GOP is applauding destroying the country bc it will make them & their friends richer.

Just because the devil says it in a softer voice doesn't make it any less evil. The cruelest deeds are uttered in a whisper and signed w/ink

Can we stop putting "Sad!" at the end of tweets please? I don't want to normalize ANYTHING about trump and his tweets of despair.

A Great Great Wall? What the hell?

7. But now that Trump has shown he can be "presidential," he should release his tax returns and apologize to President Obama for birtherism.

5. Trump also continued misleading us with his promises. You can't cut taxes, build a wall, boost defense spending and balance the budget.

Donald Trump talks about religion like someone who took one semester of Spanish trying to get around Barcelona.

This speech from the president is like catholic wedding. Up, down, up, down, applause, cheer, up, down.

Of course Trump thinks that even when you're dead the thing that makes you happy is APPLAUSE.

Between not tweeting about Oscars & his address to Congress, it seems like someone had a talk w/ the prez and gave him a big suppository.

Trump says he'll 'speak from the heart' during his first speech to Congress. And Melania will speak from Michelle Obama's.