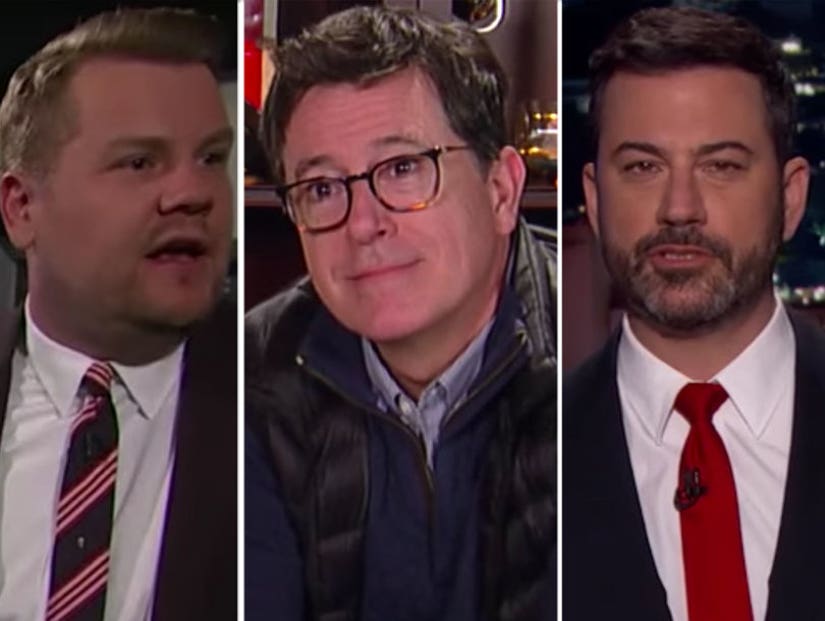 Attempting to kick off the show, Colbert found himself unable to produce any of "The Late Show" for lack of women.

"Instead of talking about [Trump]," Colbert said, "let's watch a clip." After some dead air, a visibly disheveled Colbert said: "Oh, that's right because the footage department is run by women."

Watch the video below and continue for more story.

A Day Without Women Staffers on "The Late Show"

Without the aid of women, Colbert suggested acting out the president's latest antics with sock puppets, but determines that yet another woman runs props ... and there are no sock puppets to be found.

"I don't know the story," Colbert said, "because Gloria runs the research department."

Unable to figure out why his show isn't starting, Corden stands behind the curtain looking confused.

"Why isn't the show starting, guys?" Corden asks while running around backstage. Finding an all-male crew, Corden wonders how hard it can be to open the show since all of the women were given a day off on International Women's Day and finds out after several botched attempts.

Jimmy Kimmel on "A Day Without Women"

Kimmel revealed that he wasn't exactly clear about what "A Day Without a Woman" would actually be like.

"I went years without a woman," Kimmel said in his opening monologue. "It was terrible. It was no fun at all. I don't recommend it."

After Kimmel brings out his iPhone to ask Siri to what a day without a woman is really like, Siri responded: "I'm sorry, I don't work for you today. Go f--k yourself."