Milo Ventimiglia brought himself -- and the audience -- to tears during PaleyFest's "This is Us" panel on Saturday night in Los Angeles discussing the inspiration behind his character, Jack Pearson.

"Here we go, you're going to find me crying. My father," Ventimiglia said after asked where he draws his inspiration to play Jack, and pointed to his father who was sitting in the audience with the rest of his family.

"Dan Fogelman and all the producers and writers wrote this man who loves his wife and loves his kids, really as simple as that. And I saw that in my own father," he explained, voice cracking. "There's not a moment in my life where I don't think about how he raised us, my sisters and I. So, my dad." 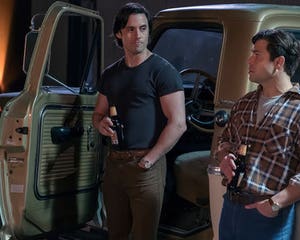 A 'This Is Us' Finale Fakeout

Watch the moving video below.

I can't handle @MiloVentimiglia in tears in real life (😭) but his parents are in the audience. He said his dad inspires how he plays Jack. pic.twitter.com/ZhOoszpMMG