LOVE IS IN THE AIR! 💞 @AROD dishes on his relationship with @JLO — and we're loving the sound of “JROD!” pic.twitter.com/dM7QTlWlpO

J-Rod is officially on.

The question elicited extreme "ooooos" from the audience as the retired New York Yankees star replied, "It's obvious. We've been having a great time."

"We're having a great time. She's an amazing, amazing girl. One of the smartest human beings I've ever met and also an incredible mother," Rodriguez said. 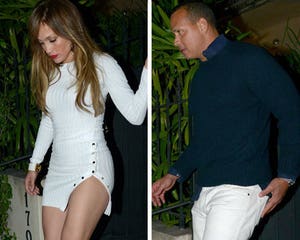 "She just likes simple things. I mean, she's a very, very simple person,” he added when pressed for more intel on his new girlfriend. "Loves family. Is a great sister. Is a great daughter."

When the women at the table asked him to reveal her guilty pleasure, A-Rod said "She would kill me if I say too much," before admitting she has a sweet tooth for chocolate.

The two have been a rumored item since they were spotted together in Miami earlier this month.

During his interview, Haines asked what their new nickname should be: A-Lo or J-Rod. He didn't answer, but vote for your favorite below.