Trevor Noah called Ivanka Trump "a liar" on Thursday's "Daily Show" for taking a White House job in her father's administration, and had the footage to back it up.

"Remember how Donald Trump and Ivanka promised they wouldn't turn the White House into a mom and pop store?" Noah asked his audience in the segment (above). "Yeah, no nepotism, remember that? Well, clearly, they don't."

Noah recalled Ivanka's 2016 appearance on "60 Minutes," where she was asked whether or not she would be joining her father's administration. Ivanka's response to Lesley Stahl was a flat-out "no," and added that she was going to just "be a daughter." 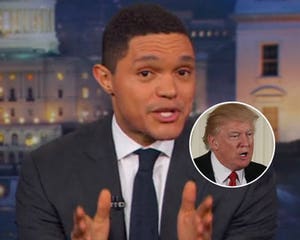 "And a liar," Noah said while savagely imitating Ivanka's smile. "Look, we all knew that Donald couldn't stand to be apart from Ivanka. In his four-year term, he was eventually going to find some way to bring her in. But two months? I'm shocked -- two months in? This guy has the patience of a toddler."