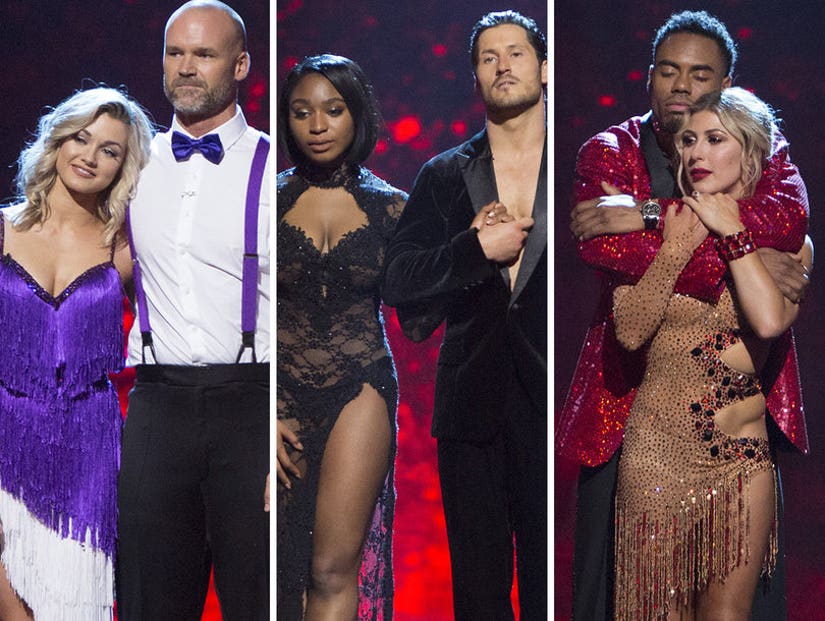 It's all over but for the confetti and the tears and TooFab's officially unofficial "Fifth Judge" was thrilled to spend another great season with you. David Ross, Normani Kordei and Rashad Jennings were just one dance away from finding out who would earn this season's Mirrorball Trophy. The past two weeks of audience voting combined with judges' scores for Monday's two dances and tonight's final performance will combine to determine the rankings for the final three. Normani has been the most consistent, while Rashad has all the momentum. Meanwhile, David has the heart and the love of the fans. It truly is anyone's night.

Fair warning, since I'm safe at home, I'm probably going to be a little harsher than my colleagues Carrie Ann Inaba, Len Goodman, Julianne Hough and Bruno Tolioni. But I might be nicer, too. Maybe. As a reminder, I predicted last night that Rashad would win, with David coming in second and Normani having to settle for an undeserved third place finish. But did I get it right?

It was great seeing some of our favorite celebrities from the season as the night carried on, but it was also bittersweet. Olympian Simone Biles came out with her former partner Sasha Farber and reminded us why they should have been in this final. Then later, Professional dancer Witney Carson got fierce with the troupe and “Glee” star Heather Morris, proving once again that Heather was one of the most talented dancers on the season who got cut way too soon. It was clear the producers liked her as she showed up over and over again in group numbers, performing with the show's troupe.

They had a fun piece that spotlighted all of the stars of the season, but for some reason Charo was riding a merry-go-round and Mr. T was just waving from the audience. It kind of took you out of the spirit of the piece, but perhaps they had injuries that limited what they could do. It was great seeing everyone else in the sprawling piece that went from outside to inside, behind the stage and everywhere else. It was a feel-good moment and a fun reminder of the joyful experience that was the whole season.

After the male professional dancers recalled “Magic Mike” in a very hot group piece before country took over for a moment. Bullrider Bonner Bolton showed a fun side in a dance with elements of line dance and country swing with his partner Sharna Burgess. It was a more relaxed side of him, and he was a lot less stiff. The lack of competition served him well.

Hailee Steinfeld, Lady Antebellum, OneRepubli, Auli'i Cravalho, and TLC all gave us live performances throughout the night, but nothing put a smile on my face as when we got a new rap from Mr. T, along with a 1980s-era inspirational anti-bullying video. This nod to long-time fans of Mr. T was a brilliant update and so much fun to watch. It even had classic VHS scratchiness and graphics. It was … totally tubular!

Nancy Kerrigan reprised her Vegas performance with partner Artem Chigvintsev, and it was wonderful to see her again. She also looked more relaxed and confident now that the competition was over for her. Like Heather, she was a talent who deserved a longer run on the show. The same could be said for “Bachelor” Nick Viall, who clearly enjoyed dancing with all of his partners, as well as partner Peta Murgatroyd. He improved tremendously in his run and was just starting to find his groove.

It was no surprise that David and Lindsay reprised the “Magic Mike” piece that started it all for David. Easily the most fun piece of the season, it was just as enjoyable as an encore performance. I wasn't disappointed that Charo's return featured her playing flamenco guitar rather than dancing. Her partner Keo Motsepe instead got to dance with Witney Carson, and the pair of them turned in a fiery performance.

Rashad went back to the first week of the competition for his encore performance, bringing a much more confident and polished cha-cha than we saw that week. He really does have the character -- and carriage -- of a professional dancer.

TLC was on hand to offer live backing music to Heather and Maks as they reprised their favorite dance of the season, ironically the one that they performed and earned a perfect score for on the same night they were prematurely eliminated from the season. When it was Normani and Val's turn, Len and Bruno crashed the party as backup construction dancers in their encore performance. They were distracting to be sure, but clearly everyone was having fun and Normani was again a vision to watch.

After watching the package where she was shockingly eliminated in the semifinals, Simone and Sasha reprised their amazing Disney night freestyle song inspired by Moana. This performance was actually less polished than when she first performed it, but it was still great to see her again. I would have enjoyed much more seeing her battle in the finals over fan-favorite David and make this a real three-way competition where all three finalists are equally deserving of the trophy.

Former Cubs catcher David Ross & Lindsay Arnold had only 24 hours to prepare a foxtrot salsa and my expectations were not particularly high, but David surprised me. He did came out with high energy, and knew the steps, but he was lumbering around like Frankenstein and even lost his balance very visibly at one point early on. The salsa portion was actually a little better, and it was one of his lightest performances as far as footwork goes. He has improved, but it's just not there technically. Still, this was one of his best performances on the season and he remains entertaining to watch.

Fifth Harmony member Normani Kordei & Valentin Chmerkovskiy came out confidently with an Argentine tango/foxtrot and it was breathtaking. It was unbelievably polished for a 24-hour performance. I scrutinized that dance and could not find a single flaw. And then the look on her face as she performed was so relaxed and at ease even as she had perfect carriage and form with amazing legs, arms. It opened so quickly, and she was sheer perfection in a sheer gown. That was a winner's dance if I've ever seen one!

“There's Nothing Holding Me Back,” Shawn Mendes

NFL running back Rashad Jennings & Emma Slater mashed up a cha-cha-cha and a tango for the final dance of the entire season. It was the most jarring fusion because their entire mood changed, including their facial expressions, as they shifted styles. That part of it didn't really work for me at all, but he was very confident and solid as a dancer. Following up Normani, though, you could see that his technique wasn't quite as polished. If it were up to me, that would be a solid 2nd place finish for Rashad.

I predicted Rashad to win last night, followed by David and Normani. But then Normani came out tonight and absolutely slayed it. I still think David has solid fan support, but I think Normani and Rashad were in a dead heat for the Mirrorball Trophy and absolutely deserved to stand side by side as the last couples standing.

I didn't want to be right, but with the first reveal, my prediction started to come true. Normani absolutely doesn't deserve to be in third any more than Simone deserved to be fourth. In the end, it came down exactly as I predicted, and I can't be disappointed with the winner. Rashad was one of the strongest performers on the season and the hardest worker, and he is absolutely deserving of the title.

'Dancing With the Stars' returns in September for its 25th season on ABC.