Hannibal Buress pulled off an epic prank at the Los Angeles "Spider-Man: Homecoming" premiere he was supposed to attend. Instead, he hired a doppelgänger to roam the red carpet on his behalf.

Buress, who plays Coach Wilson in the Marvel-Sony superhero flick, wrote in a since-deleted tweet Wednesday afternoon that he needed "a lookalike with solid comedic timing for an event tonight" and offered $500.

Hours later, a man who looked almost identical to Buress showed up in character to pose for pictures and even tricked entertainment reporters into interviewing him. One video (above) TooFab found online shows a woman completely falling for the prank, asking the paid imposter questions like, "What is it like to be part of an incredibly huge universe like this?" 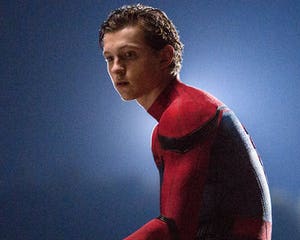 The imposter didn't hesitate to embrace the role. "It was a great opportunity. I had a lot of fun," he said. "So to play Coach Wilosn, working with the cast, it was a great time. I had a blast. I wouldn't trade it for nothing in the world."

Meanwhile, Buress was busy trying to keep up the charade and tweeted, "I'm out here at the @SpiderManMovie premiere. In theaters July 8th."

The lookalike revealed himself on Instagram as Joe Carroll at the end of the event.

Buress' fans got a big kick out of the stunt. Take a look at some reactions below.

YO HANNIBAL BURESS GOT A 'LOOKALIKE' TO GO TO THE SPIDERMAN HOMECOMING PREMIERE FOR HIM I'M DEAAAAAAAD pic.twitter.com/8Aa2d5gOii

Hannibal Buress sending a "look-a-like" to the Spider-Man premier is hilarious to me.

Hey @MrNishKumar @AhirShah @rizmc if you're ever in a scheduling bind or just don't want to do it, you can always do a Hannibal Buress 👇🏽👇🏽 https://t.co/69yxVgcuoV

hannibal buress you are my hero

Hannibal Buress is the real MVP

hannibal buress sending someone to the SM:H red carpet to pretend to be him is the best thing i've seen this month