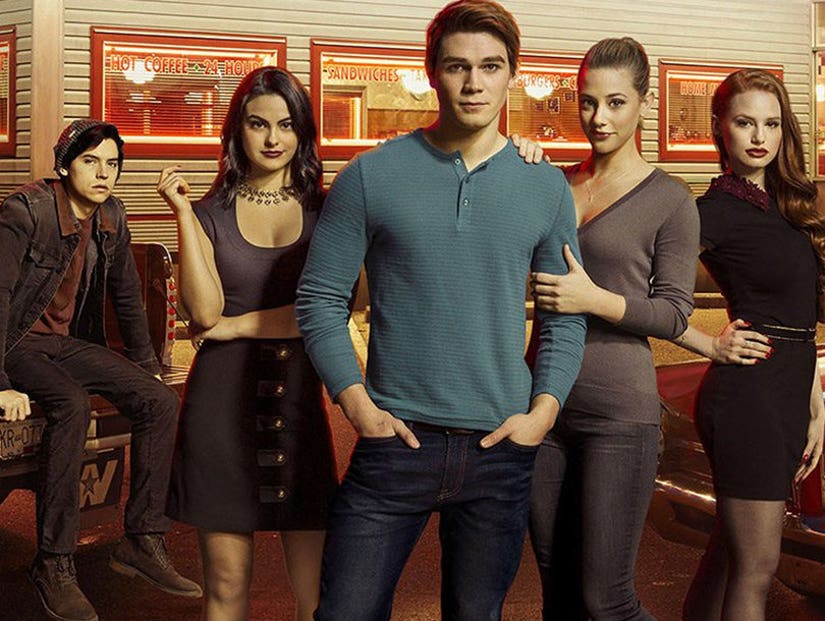 The cast of "Riverdale" appeared at Comic-Con for their second year in a row this weekend, dropping the first trailer for Season 2 and teasing the excitement to come when the show returns.

Fans can be on the lookout for daddy drama, more big mysteries and, yes, a lot of Bughead.

Keep reading for 9 things we learned about Season 2, below our video of Cheryl Blossom performing with the Pussycats at a Comic-Con bash!

Fred's Fate Will Be Revealed In the First Episode

"Who Shot Fred Andrews?" seems like it's going to be the big mystery at the beginning of Season 2, but thankfully, we'll know whether Archie's dad lives or dies by the end of the first episode.

"It's all happening in Season 2. Fred being shot, its unclear whether he's alive or if he is dead. But, depending on that, it's going to affect Archie forever," KJ Apa explained. "You're going to see the flip side of his character. First episode of Season 2, we see a side of Archie didn't come out in Season 1. I was really excited when I saw the first script of season 2. I felt really happy. It was really challenging, it is really challenging."

Mark Consuelos joins the show as Veronica's dad in Season 2, causing some changes for his daughter's life in Riverdale.

"I feel like all Season 1, all Veronica did was talk about her dad, so this is the moment she's been waiting for ever since she moved to Riverdale," said Camila Mendes. "I think she's terrified and doesn't really know where she stands with him. There's so many mixed feelings, either she is going to be daddy's little girl and want to please him and impress him and show him she's a Lodge after all and can handle tough situations or she's gonna be really hard on him, keep tabs on him an make sure he's sticking to a good path and not going that corrupt route."

"Because of all of that drama, her relationship with her mother has changed because Hiram has changed how her mother acts around Veronica," she added. "She's colder, she's secretive and not sharing anything and Veronica just wants to feel like she has a seat at the table."

Bughead Lives on In Season 2

When asked if fans would see anything romantic develop between Betty and Archie in Season 2, Lili Reinhart shot the notion down.

"Not at this point, I don't know for the long run. At this point, it's still platonic, she loves Jughead," she confirmed. "You see a good amount of moments of friendship between Betty and Archie, which is really nice because I don't think we got to see a lot of that in Season 1. You get to see the two best friends that grew up as neighbors and that's really nice for me to see."

The Cast and Crew Are Very Aware Fandom Loves Bughead

Fans get whipped into a frenzy over the idea of Bughead, with shippers working overtime online to let their love of the couple known.

"We thought people would be into Jughead and Betty, but the intensity of the Bughead fandom was a lovely surprise," said executive producer Sarah Schechter.

She added that it's a juggling act to give the fans what they want and what's good for the show.

"Ultimately, we have to do our own thing. People want, we're so lucky they love the characters and they connect to them and their relationships, but if there's no problems the show would actually be pretty boring," she added. "You just want people to be in love and be happy, but what, we're watching them eat lunch? As much as you want to honor how the audience is invested in these character, you want the characters to continue to grow. For them to grow, they have to make mistakes, have setbacks, they need to have problems they overcome."

"Social media's such an active part of fanaticism nowadays and I think a lot of fans think they can bully around the actors and writers online and whatnot into a kind of narrative they want to see," Cole Sprouse added. "To me that feels quite a bit like artist's gallery with the artist present and telling them to change a picture or a painting that they've made."

"It's been an interesting balance knowing you have to appeal to the same kind of craft that the fans came to love in Season 1, but also not allowing them to dictate the narrative," he added.

Despite all that, Schechter promised "another iconic Bughead moment" is coming.

Cheryl Blossom Will Be Even More of a Mean Girl

After her brother and father's deaths in Season 1 and Thornhill burning to the ground in the finale, Cheryl will be a changed person in Season 2.

"She's seeked help, she's making a conscious decision to take control of her life and to be happier in her right, which doesn't necessarily mean she's going to be happier with other people involved," Madelaine Petsch explained. "She's taking control, getting meaner and colder to people around her because it's the only way she can feel protected. To the outside world, she will be a lot meaner, but in her head she's just doing what she can to cope."

Drama for Betty and Veronica

The two have their friendship "put to the test a little bit" in Season 2, explained Lili Reinhart.

"When Betty and Veronica do have a conflict with one another and when they aren't necessarily on the same team anymore, it makes you realize how much you do love the girls as a duo," she added.

"It's heartbreaking watching that conflict unfold because it's coming from a place of love and protection, so it hurts," added Camila Mendes. "The audience will be hurt watching it."

Betty Will Go to a Darker Place

"For Betty, there becomes a broken side of her that you see," Reinhart added. "Betty, without saying anything about the mystery itself, is kind of at the core of the mystery of Season 2 for the first half of the season. She's thrown into something she'd never imaging being throw into."

"The circumstances kind of break her," she continued. "It's not so much of a darkness, but brokenness."

Josie Will Enter the Fold More

Josie will have some drama of her own with the Pussycats and it sounds like she'll turn to Cheryl.

"She's going to be pursing music more, which might cause some issues in the group," she added. "There will also be some interesting issues with her mother because of the darkness that's happening and things that are affecting everyone and that might test how much she trusts or knows her mom."

Will "Riverdale" Embrace the Supernatural?

The source comics definitely lean into the supernatural side, with zombies, witches and werewolves, but what about the show?

"I'd love to see Predator coming to town," Madelaine Petsch joked. "I mean, it's not going to happen.

"As long as we don't get zombies. I have a strong irrational fear of zombies, as Ashleigh," Murray added.

When asked about Sabrina, Sarah Schechter added, "No comment on that. Honest to god answer is I don't know yet.