The drinking and fighting continued on "Real Housewives of New York" this week as the women's Mexico trip rolled on.

After battling it out over room assignments and whether one of the show's stars tipped off Page Six on a story about Tinsley Mortimer last week, drama around the latter picked up again Wednesday night.

During a group dinner, the women all learned the article about Tinsley being an ungrateful houseguest to Sonja Morgan was posted online, sparking another war of words at the dinner table. 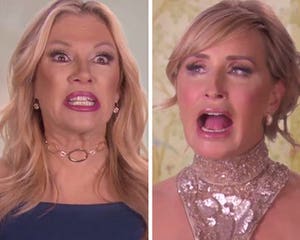 Almost all the women believed Sonja was the one who planted the story. "It started from you," Mortimer said to Morgan, who brushed her off. "She's having one of her Tinsley tantrums," Sonja replied, "I did not say she's a bad houseguest. It wasn't about you being a bad houseguest, it was a friendship issue."

"You complained about me so much that it got in the press," Mortimer added, "Sonja, you're lying."

"We have all these conversations and we get nowhere," Bethenny Frankel added, when it became apparent this feud wouldn't be solved over dinner. "It's a circle jerk!" 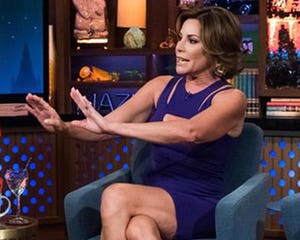 When Morgan then asked what a "circle jerk" was, Carole Radziwell surprised everyone by laying it out in explicit detail.

That wasn't the only face-off of the night though.

After a trip to a tequila tasting, the booze continued to flow when the woman all got back to their home away from home. Talk turned to Ramona Singer's split from Mario and it was then that a slurring Sonja started to dig in on her BFF.

"You were having great sex every night, you were so happy, of course you had your quirks, you weren't perfect, now you say you're happy and you're happy without Mario, I don't believe it," she said to Ramona. 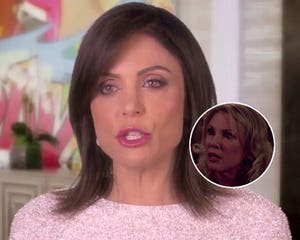 After Morgan told Singer to "stop with this fake shit," Bethenny Frankel of all people swooped in to defend Ramona.

"Sonja is literally just badgering her," Frankel added in a confessional. "You know, I'm coming in to defend Ramona, you know it's grim."

The episode ended with Morgan once again yelling "I want you to admit you're not happy like you say!" at Singer. Ramona's response: "I'M HAPPY!"

More Mexico madness to be continued next week.