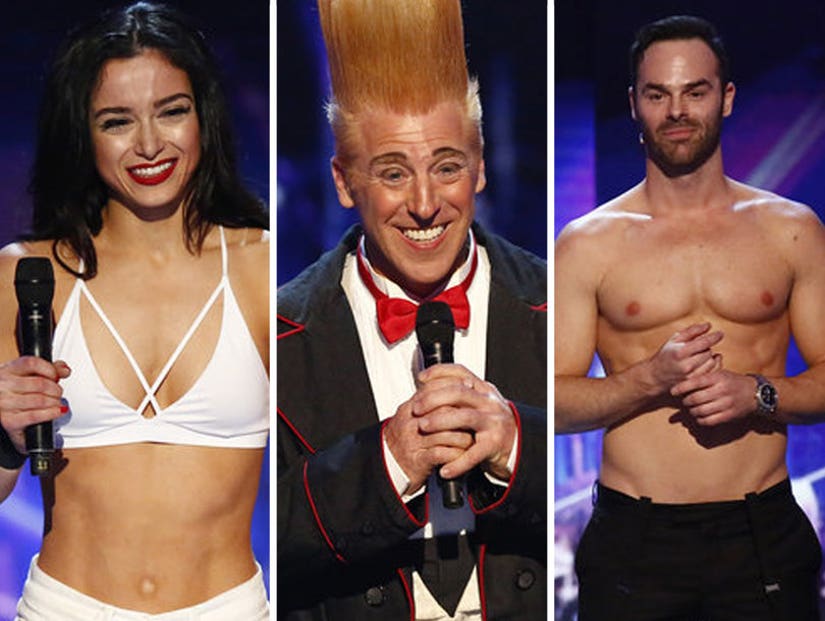 Once again, 20 will become seven as the bloodiest round of the competition continues on "America's Got Talent." This week, we got a lot more thrill acts than in weeks past, so it was a very different experience. It's such an unusual thing, comparing a singer to a stuntman to a pole dancer to a comedian but that's the name of the game. Joining the panel this week as the “sixth judge” is Laverne Cox. As in previous weeks, she has a Golden Buzzer of her own to put one act straight through. 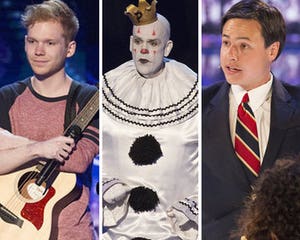 Aileen George (pole dancer) got a short edit, but if those were the highlights, it was a blessing in disguise. I thought it was exploitative to push her through as she wasn't particularly impressive on the pole the first time around, and this time it seemed like it went even worse.

5 Alive (singers?/dancers) was actually worse than the first time we saw them, and I was grateful for the short edit. I agreed with Simon then that they felt old-fashioned, and this time they just felt like kids at a talent show who get booed off the stage.

Oscar Hernandez (choreographer/dancer) didn't impress me the first time out, coming across more like a fun guy at a party than a real dancer. This time, he showed a little more, performing more like you'd expect to see in backing dancers at a pop concert. It was appropriate that he had cheerleaders behind him. He proved that he's got the moves and really upped his game from last time. You could see in a few places that he wasn't quite able to keep up with his cheerleaders. He's fun, but he's not a guy who should be winning “America's Got Talent.”

The Naked Magicians (magicians) didn't get completely naked but they still managed to impress. I didn't like that “Eat” was on their arm, because the other words could have just as easily been on their legs. But when they got it marked on Tyra's arm, that was impressive. Still, not the most dazzling magic we've seen, even with the short edit.

Tony & Jordan (digital magicians) got short-changed in the edit, but their act essentially boils down to making things appear and disappear in conjunction with what's happening on a large screen behind them. It's certainly clever and has potential to really be something special, but we didn't see that in the snippet we got.

Shemika Charles (limbo performer) lowered the bar and set one of them on fire. Then she tried adding a spinning plates element to the limbo, and while she achieved it there was something underwhelming about it. Maybe because it's really just one trick done in different ways, it's starting to feel really limited.

Brobots & Mandroidz (dance troupe) lost a few members from the last time we saw them because their parents wanted them to focus on school, and yet there are still so many of them. Unfortunately, it also looked like too many dancers while they were performing, and it also looked like they were amateurs with different levels of skill and precision. The choreography didn't really challenge them, and the piece didn't really dazzle me.

Daniel Ferguson (singing impressionist) did more of the same singing as characters and celebrity personalities. It's fun when you see the dozens who are doing this on YouTube, but it's not an act that's going to win a million dollars. 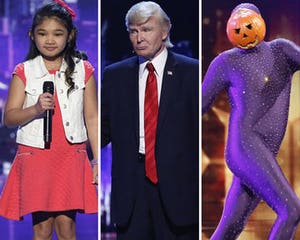 Final Draft (singers/dancers) didn't impress as much this time around, and it may have come to the song choice. If this had been their first audition, they might not have even made it this far. Maybe nerves got the best of them. Their saving grace is that the judges do look at their entire “AGT” experience.

Jay Jay Phillips (singer/keyboardist) kept his act just as ridiculous this time around, and his personality just as wacky, but he is talented at playing the keyboard and knows how to rock in the most unexpected ways. It's easily one of the silliest things to ever appear on “AGT,” but it's pretty entertaining. He's made me smile at least a little twice now, but he always leaves me with mixed feelings.

Jonathan Rinny (balance performer) raised his act this time, quite literally, and it's always thrilling and scary. But it's also more of the same with an added element of danger.

Marisa McKaye (singer/guitarist) has an impressively polished voice for a 12-year-old girl, but it still wasn't totally mature. Still, she's the kind of act that does very well with audiences, as she's an adorable child with an impressive vocal ability. Is it better than some of the other adorable children with impressive vocal abilities that we've seen; it's debatable. But still, she's pleasant to watch perform.

Jeki Yoo (magician) did a new twist on the signed card gimmick utilizing a bowl and it was a lot of fun to watch. His silliness and laughter work beautifully as a diversion for however he's doing the tricks. They were right on him with the camera and you could not at all see how he was able to move the card and then the whole deck under the bowl over and over again. 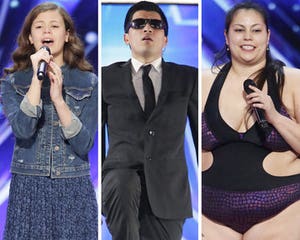 Bello Nock (daredevil) said he'd launch out of a cannon over a helicopter as he promised he would to impress Simon the last round. It's certainly a dangerous stunt, and one that will impress. Combining it with his very high balancing act the first time around, and Nock is definitely a daredevil worth watching. And he nailed the landing, proving that he'll do anything. Simon was on board and he could certainly make a fun and memorable Vegas act.

Diavolo (dance troupe) introduced us to its founder, Jacques Heim, this time around. They worked on the rocking structure the first time around and it was totally unique, scary and amazing all at the same time. For this round, they got a different structure. While this one was a lot more intricate, creating all kinds of interesting visuals along the way, the dancing and danger wasn't nearly as present this time around. It felt like a creative step up artistically, but at the same time less exciting than the last time. That said, this is the kind of vision that could own a Vegas act.

Billy & Emily England (roller skating) added new elements to their acrobatic routine, and it was even more dangerous and terrifying. This time as he was swinging her around like a madman, she was hanging onto his beard. They said they couldn't even rehearse the beard trick because they feared he'd lose too much hair to be able to do it again. There's nothing quite like this act, and even though it's largely the same thing every time, it remains imminently watchable.

Celine Tam (singer) is a nine-year-old vocal ingenue who blew me away the first time around. She sounded young, but had such a powerful and amazing gift. This performance golden buzzer all over it, as Celine once again singing beyond her years. You can still hear the youth, but you also hear a beautiful vibrato, power, control, pitch and everything you need to hear in someone who is an amazing singer … at NINE. YEARS. OLD. Laverne saw it and gold confetti rained down on Celine as her jaw hit the ground in shock and excitement.Laverne Cox Golden Buzzer

Herbie Russ (singer/saxophonist) didn't get shown in the previous round, so this was our first look at him. He tackled Joe Cocker and it was immediately evident why, as he shared a similar rasp and gravel in his voice. He showed impressive range and power with his voice, and even better he's quite talented on the saxophone. It's an interesting pairing for a lead vocalist to play this instrument, and it robbed us of more sax, but I can't fault anything he did.

Preacher Lawson (comedian) has a great delivery and knows how to work the audience. He told a story about getting catfished by the woman who became his girlfriend, and yet it wasn't the content of the story -- which was amusing enough -- it was how he told the story. This is the mark of a gifted comic. In a short span of time he had the audience eating out of the palm of his hand, and he can apparently make any story fun to hear.

Mike Yung (singer) was shown right after Herbie, and it was immediately evident that his voice was even more powerful and controlled. Both men sing in very different styles, and both have the advantage of their years of experience in the timbre of their voice and the vocal quality they bring to the stage. Mike tackled Sam Cooke's “A Change Is Gonna Come” and did it proud because he's lived it and dreams it every day. 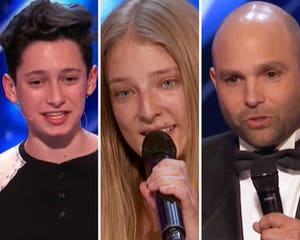 Right off the bat, we were on different pages as they put Robots & Mandroids and Oscar Hernandez through, and I didn't even have either acts as contenders. Meanwhile, I found room for both Herbie Russ and Mike Yung, but only the latter made their cut. The other act I liked that didn't pass their muster was Bello Nock, but I've found him more entertaining than Simon at least from the beginning.

Beyond that we totally agreed that Preacher Lawson, Diavolo, and Billy & Emily England should join Celine Tam on the live shows.

Next week, we'll do it all again as Judge Cuts wrap on “America's Got Talent,” Tuesdays at 8 p.m. ET on NBC. 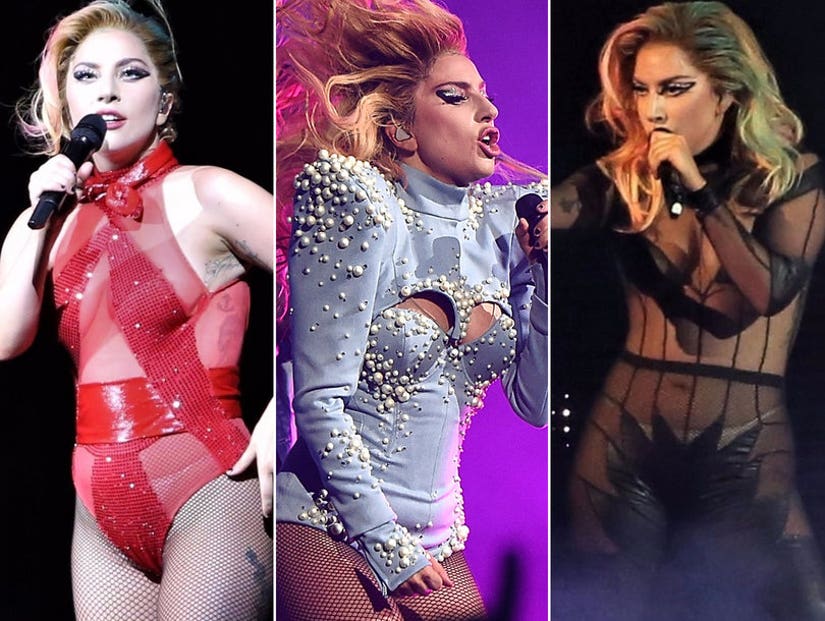