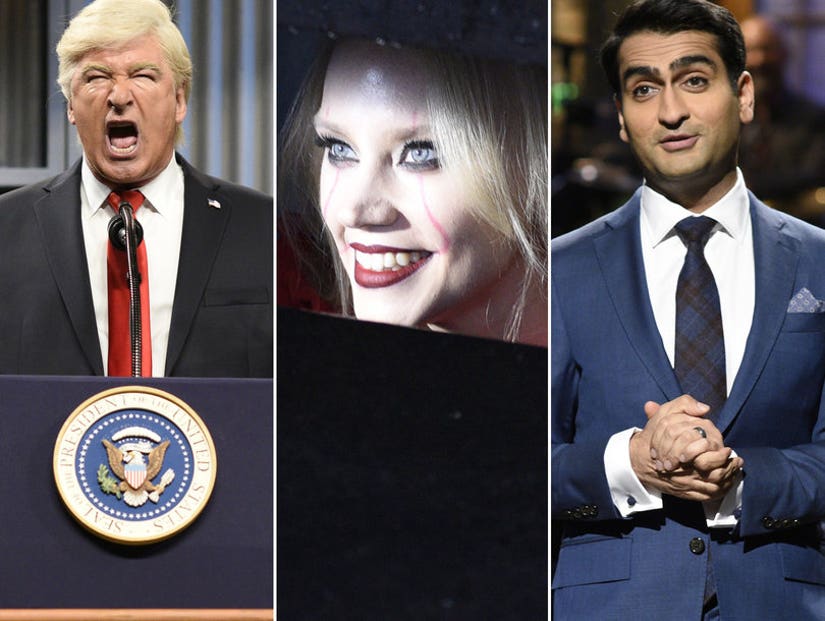 With a long history in comedy, Kumail Nanjiani ("The Big Sick," "Silicon Valley") was hoping to turn things around after a less-than-hilarious outing by Wonder Woman Gal Gadot. Even though she tried to leave the heavy lifting to the Repertory Players, most of the sketches fell flat, resulting in a disappointing show propped up by a stellar "Weekend Update." "Saturday Night Live" is still riding high from Season 42, so they can't let too many of those slip by.

Luckily, both the host and cast were in excellent form this week, with several hilarious segments and another classic appearance by Alec Baldwin as Donald Trump. Even better, "SNL" tackled the Harvey Weinstein scandal a couple of times throughout the night, pulling no punches. This is what "SNL" should be doing, and why it airs live coast-to-coast. We want it to be topical, sharp satire.

As usual, we're ranking all the sketches from worst to first, including the Cold Open and the regular "Weekend Update" segments. We'll skip the musical guests, because they're not usually funny -- unless Ashlee Simpson shows up. We wrap up with a look at the cast-member who had the strongest week. Also, in these early episodes, we'd like to see if the new kids are getting any screen time. "SNL" recently added Heidi Gardner, Luke Null, and Chris Redd as featured players.

This was one of those sketches that benefited from pairing with a pre-taped segment so it could be shorter. The premise was pretty simple. The boss calls during the company Halloween party to tell his staff he may have given them all Hepatitis A by baking them a cake. That's about it. They got a few laughs out of him mishearing them on the phone and concerns about the disease, but that was it. This one felt like it never fully came together but they kind of went with it anyway.

Kate McKinnon smirked as a sexually active 91-year-old grandmother in this segment about the realities of STDs in nursing homes. Nanjiani portrayed the nurse trying to explain this to her horrified grandkids, Mikey Day and Heidi Gardner. What starts as simply talking about old people sex devolves into the nursing home actually sending her into resident rooms to give them a reason to live. The whole thing is a little more weird and uncomfortable rather than funny, but McKinnon gets to ham it up for the camera.

"We're getting rid of everything Obama did," Baldwin's Trump opened, promising to replace Michelle Obama's vegetable garden with a nugget garden. He threw in a few jabs at Bob Corker's height and threw to Beck Bennett's Mike Pence a few times so he could freak out and run every time he got triggered. How dare an Indiana Pacer kneel for the anthem, or Starbucks have pumpkin spice?! That's just so … basic! Did you know I.Q. stands for InQuedible? There was so much non-sequitur nonsense throughout this bit, but Baldwin sold it with his consistently ridiculous and hilarious Trump impression. It's similar to how Dana Carvey could open an "SNL" episode by saying absolutely nothing as George H.W. Bush back in the late 1980s and early '90s.

After oddly avoiding the Weinstein scandal in last week's episode, it was the top story on this week's segment, though they quickly then shifted to Trump. Admittedly, they said it was hard to make jokes about his predatory behavior. Michael Che made a comparison with the Attack on Christmas, which Trump recently addressed, and the Black Lives Matter movement. It was another solid outing by Che and Colin Jost, with bits about Mike Ditka, Kim Jong-un and the new Mystery Oreo flavor. Cecily Strong showed up as Ivana Trump to continue her delusional rant about being the true First Lady, but it lacked any real laugh-out-loud moments and as she was the only guest, it let the whole segment end on kind of a down note.

This video segment was a dramatic piece about Nanjiani working in Pakistan at a call center where he developed an emotional connection with Strong's Melania Trump. He played it completely straight as someone who commiserated with her misery. It took a weird turn at the end when she snuck out of the White House -- covering a pile of Gucci handbags on her bed with a blanket as if that was her -- to fly to the call center he worked at and thank him for listening. The earnestness with which the pre-taped segment was presented reminded me of some early Gilda Radner taped segments, or the vintage musical pieces Phil Hartman and Jan Hook used to do. It was welcome piece, even though you had to sit with it a moment to fully appreciate it. This earnestness has been present in several pieces about what it must be like for the First Lady to live in the White House, and it's a brilliant take.

As you might expect from a seasoned comedian, Nanjiani came out and talked about how he fell in love with his wife -- and how his Pakistani family took it -- before diving deep into racism and Islamophobia, even predicting that the quote on the Internet from his monologue would be that Islam is right and women shouldn't drive. It was a very topical stand-up segment, and reminded us that it's important to have diversity in spaces like this to speak their truths so that everyone can hear them for what they are … ordinary people like you. Even better, it was funny.

Day portrayed a filmmaker rescued from North Korea only to be put up in a hotel in the room next to a screaming couple, played by Leslie Jones and Chris Redd, but the main reason this sketch worked was Nanjiani as the smarmy and agreeable hotel concierge. He kept pushing the Stargazer Lounge so aggressively, we're going to be looking for it ourselves tonight. He didn't skip a beat when Kumail punched him in the face. "Happens all the time," he smiled. The ongoing joke was nothing we haven't seen before, but it was how well Day and Nanjiani played off of one another that made it work so well.

Day played host in this money-stealing game as Nanjiani and Strong faced off. But really it was about Cecily Strong being an amazing veteran and mother while Nanjiani was just kind of a regular guy. She had him beat on every moral and sympathetic ground and he played it up for laughs how badly he felt that he was beating her at every turn in the game. She, of course, just played super sweet the whole time. The whole extended joke was just hilariously ridiculous with the actors selling it flawlessly. It was hilariously uncomfortable as once again Day and Nanjiani showed amazing chemistry working together.

In a very timely sketch, McKinnon brought back her 1950s screen legend character, Debette Goldry, to talk about sexual harassment in Hollywood. Her having gotten harassed back in the day was the whole point of the character, with modern women horrified about what she had to endure. In the wake of the Harvey Weinstein scandal, suddenly it seems things haven't changed all that much. Jones joined her as Viola Davis, while Strong reprised her Marion Cotillard. McKinnon attacked Weinstein directly, comparing his genitals to his face at one point. But really the sketch had some very serious things to say about this horrific Hollywood culture. Couching truth with humor is a great way to get the message across, and it's great seeing "SNL" not afraid to tackle this tough topic -- even if they were silent on it last week. I know Baldwin generally gets the top spot, but I would have loved to see this segment open the show.

In this inspired pre-taped segment, Alex Moffat's Anderson Cooper loses a flyer into a sewer on a rainy night only to find McKinnon's Kellyanne Conway in the sewer as a variation on Stephen King's "It." What was impressive was how McKinnon was able to change her voice back and forth from her take on the clown-monster and her Conway. She even worked her Hillary Clinton into the segment, which got pretty graphic as it paralleled the source material. It was a tour de force for the two-time Emmy winner who proved once again she's the most diverse cast member on the show.

Never have we seen a cast-member display such amazing comedic chemistry with the host as we saw this week with Mikey Day and Kumail Nanjiani, but the two were absolutely brilliant to watch together across two sketches. It was almost enough to give Day the title this week, but then Kate McKinnon channeled Kellyanne Conway and Pennywise in the same sketch, while bringing a perfect balance of seriousness and levity as Debette Goldry in tackling the Weinstein scandal and sexual harassment of women in Hollywood. She is a chameleon in this cast, burying herself seamlessly in these various roles and it pretty much always works. I don't want McKinnon to win these every other week, but the other members of the cast are just going to have to up their game. There's a reason she's winning Emmys for her work here.