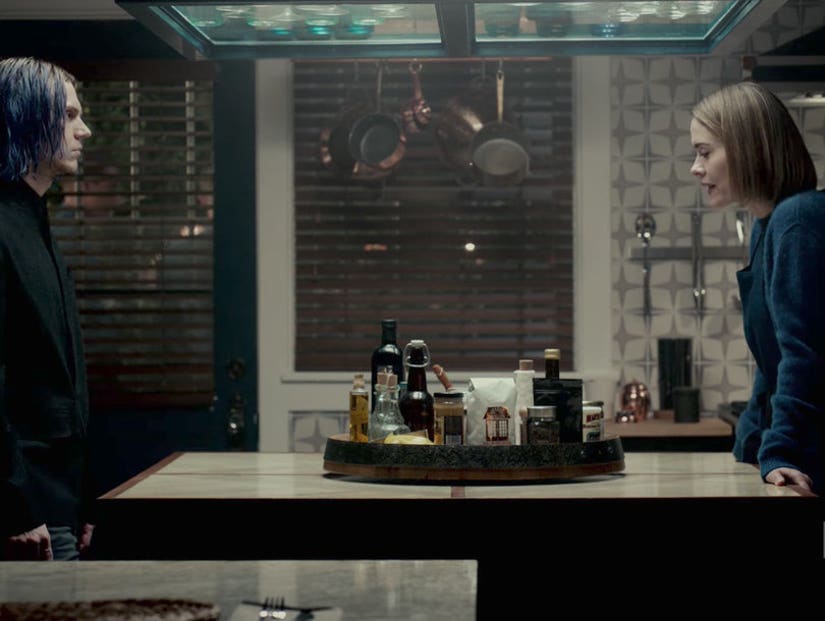 In a season that's already given us Lena Dunham shooting Andy Warhol, Chaz Bono cutting off his own hand, the return of Twisty the Clown and Billy Eichner's reaction to Evan Peters pleasuring himself, here are the 5 most shocking moments from Tuesday's new episode, "Winter Of Our Discontent." 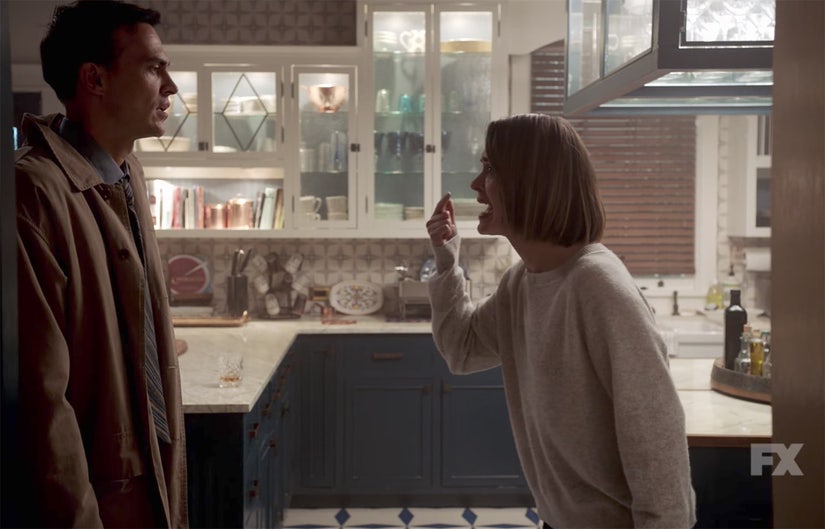 Finally, an answer to a question we've been asking all season: How much did Dr. Rudy Vincent (Cheyenne Jackson) know about his brother Kai's cult? The answer, in short, nothing.

The episode kicked off with Vincent telling his brother he didn't know about Kai running for office or his group of followers, but added he wanted to get in on it. But that appeared to be a ruse, as he later went running to Ally Mayfair-Richards -- fresh out of the loony bin -- and said he finally believed her. "The man who has been terrorizing you is more dangerous than you know. He's my brother. He's my little brother," he revealed, showing a photo of him, Kai and Winter.

He also said Kai must have broken into his office and looked at his files, confirming how the cult knew about everybody's phobias in the first place.

But when Kai found out about his brother's plan to stop him (more on that next), the blue-haired cult leader cut off Rudy's finger and then stabbed him to death.

Ally reemerged this week stronger than ever. After Vincent confided in her that he believed her and planned to take out Kai, she used it against him in a shocking move.

After inviting Kai over for dinner, she brokered a deal: She'd give him some very valuable intel and in return, he'd help her get her son back from Ivy. The info: his brother was double-crossing him. "You cured me. I'm not afraid of anything, anymore," she also told him, defiantly.

The episode ended with her removing a mask after being introduced as the cult's newest member, throwing one helluva glance at her estranged wife. It's going to be fun seeing this one shake out.

First off, yes, that was Rick Springfield playing the incredibly creepy Pastor Charles on Tuesday's episode.

In a flashback, we learned that Kai's transformation into guru started with him and Winter trolling SJWs online. Their comments condemning abortion and sex led to an invitation to "Judgment House," a Hell house led by Springfield's character.

But this religious haunt was extreme, filled with people who were kidnapped and placed in "Saw"-like traps as punishment for being gay, going to Planned Parenthood and abusing drugs. Kai and Winter free the three victims, before killing Charles for condemning others "for no reason."

"Everything changed after Pastor Charles -- he's lost his way, but we can put him back on the right path," Winter said after telling the story. "He'll listen to me."

Yeah, that didn't go as planned, which leads us to ... 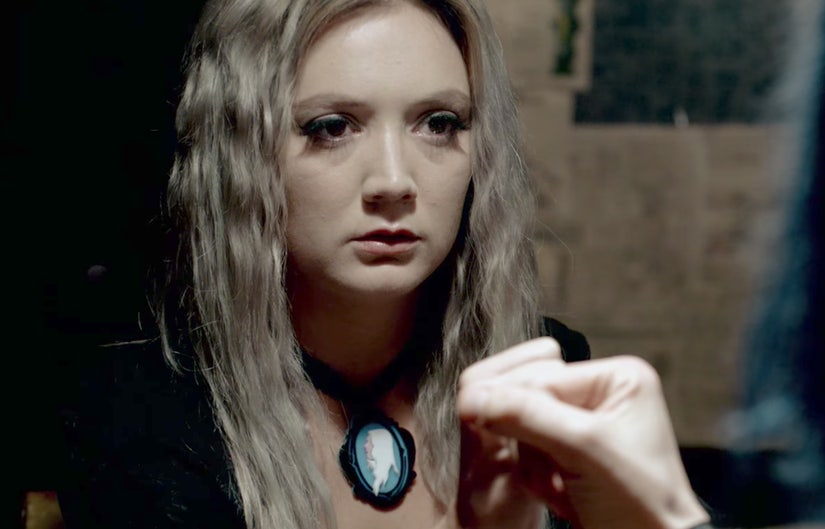 When Ivy confronted her brother, Kai dropped a bomb on her: he wanted her to get pregnant with the "Messiah," a savior who will "carry on our mission."

After she told him that'd be incest for her to carry his child, he offered up one sick and twisted alternative. "Samuels (Colton Haynes), he will be the instrument of our union. As he enters you, I will enter him, that way I will be the father but you will remain pure and unsoiled," he explained, "You cool with that?"

Viewers later watched the trio attempt to get it on to the sounds of All-4-One's "I Swear," but Samuels couldn't get it up and suggested using a turkey baster. Winter wasn't hearing it though, saying it's all "bullshit."

By the episode's end, there's no one pregnant with the messiah, but we have a feeling this thread won't be going away.

Samuels' Backstory and His Death

As punishment for not doing the deed, Winter is forced to pick up trash on the side of the road in prison scrubs and a dunce hat. When Samuels came to pick her up, he revealed how he and Kai first met.

Samuels first busted Kai for selling fake prescriptions and wanted in on the action. When Kai went to his home to hammer out the details, he discovered the bleach blonde cop was actually a Nazi sympathizer who has a hard time getting, well, hard with women in general.

Kai's advice: stop giving women his power. "You don't need more women, you need a man. There's no such thing as gay or straight. You have to lean into your masculinity. It's like electricity. With a man, there's no energy drain. You're building on one another, exponentially," he told him. Next thing you know, Samuels is on all fours, happily taking it from Kai.

After Winter told him he's "totally gay," however, Samuels tried to rape her to prove otherwise. Too bad for him, she got a hold of his gun and shot him right in the forehead. RIP Samuels. 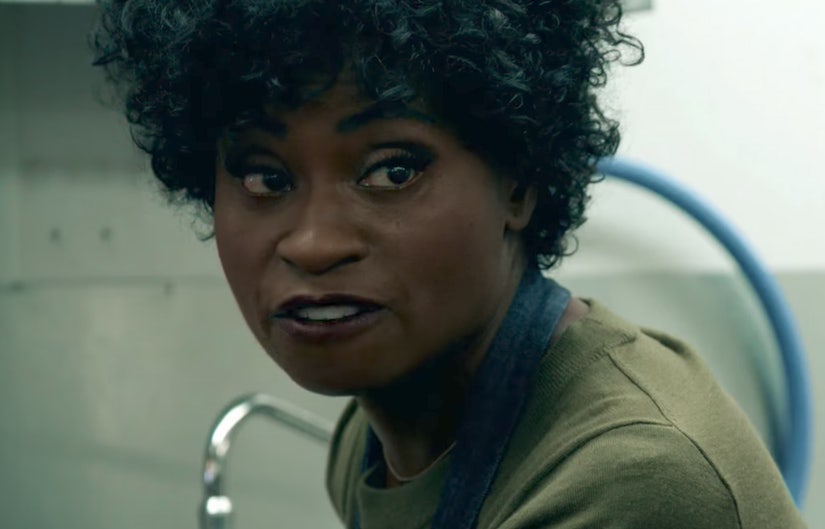 Beverly is having it rough. Apparently, she's no longer a reporter and Kai has forced her into doing dishes at Butchery on Main after the women all pulled rank and killed Harrison last week.

"If we cut off the head of the snake, the entire army falls," Beverly told both Ivy and Winter. "He is not fit to lead. You have to decide whether you're with us or against us," she added, telling Winter that he'll do anything for power, "even if that means sacrificing baby sis."

Unfortunately for Bev, "baby sis" turned on her and told Kai that Beverly was the one who shot and killed Samuels. He had her tied up as well at the end of the episode, but spared her for now -- telling his followers to put her in the "isolation chamber."

Is there still hope for Beverly Hope? We'll see next week on "American Horror Story: Cult."