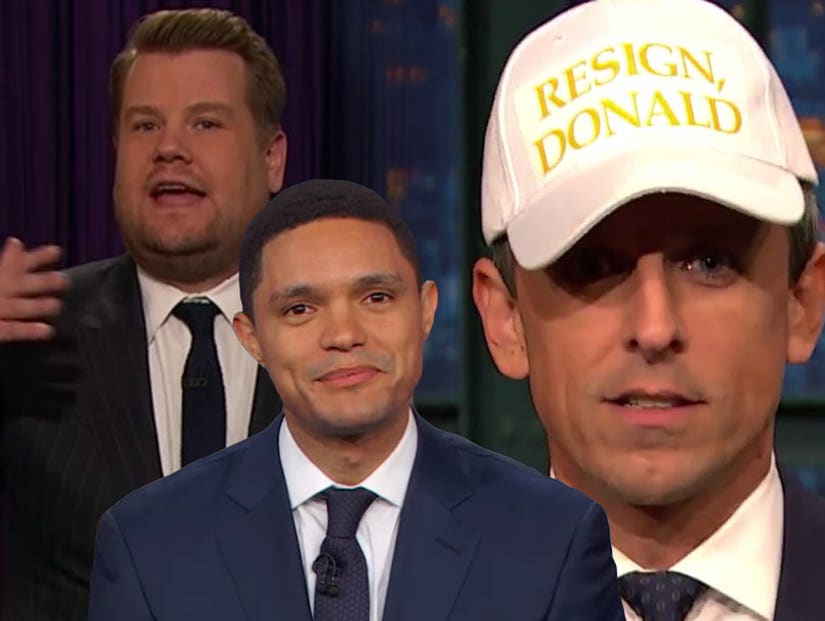 Donald Trump's 13-day tour of Asia was the talk of late-night on Monday, as James Corden, Trevor Noah, Stephen Colbert and Seth Meyers all went in on the president's behavior overseas.

POTUS' trip started with a stop in Hawaii before heading to Japan, where he met with Prime Ninister Shinzo Abe. He then continued on to South Korea.

Here's how late-night tackled his trip so far:

"Following the president's trip, Secretary of State Rex Tillerson will then kick off his own 13-day trip to apologize for everything Donald Trump says," Corden joked on "The Late Late Show."

"Trump was in Japan yesterday, and plans to also visit Korea, China, Vietnam and the Philippines. Or, as Trump calls them, 'China,'" he continued.

The host also joked that Shinzo Abe looked "like an exhausted parent on take your kids to work day" during his interactions with the president.

"Once again they have to deal with an out of control monster with tiny hands," the "Daily Show" host joked of his Japan visit.

Noah then mocked the hats both Abe and Trump donned to show their partnership. "How did they go from Make America Great Again to Donald & Shinzo Make Alliance Even Greater? Is this one of those awkward Japanese translation things," he asked. "It's the same way Fast & the Furious was released in Japan as 'The Angry Cards Zoom at Speed Excess.'"

As for Trump's journey to South Korea, Noah said he'll "probably shove chopsticks up his nose and pretend that he's a walrus" once he gets there.

"Historians know all the best diplomacy was accomplished via headgear," the "Late Show" host cracked about Trump and Abe's matching hats.

Colbert also addressed Trump reportedly wondering "why a country of samurai warriors did not shoot down the missiles."

"Doesn't have to be a samurai, could be a ninja, Power Ranger, Godzilla, Mr. Miyagi," the host joked while imitating POTUS.

The "Late Night" host also joked about the matching hats, saying the message "sounds like what you say to a monkey if you were teaching it sign language."

He then donned his own version, with the message, "Resign, Donald" written in gold.

Of the "samurai" comments, he added, "OK, there are about 54 things wrong with that, but let's just do three. One, Japan hasn't had samurai warriors in hundreds of years. Two, they famously carried swords, so if the rockets were more than like 8 feet off the ground, good luck. And three, anybody who watches movies knows that samurais were white guys."

He then showed images of Tom Cruise in "The Last Samurai" Steven Seagal.