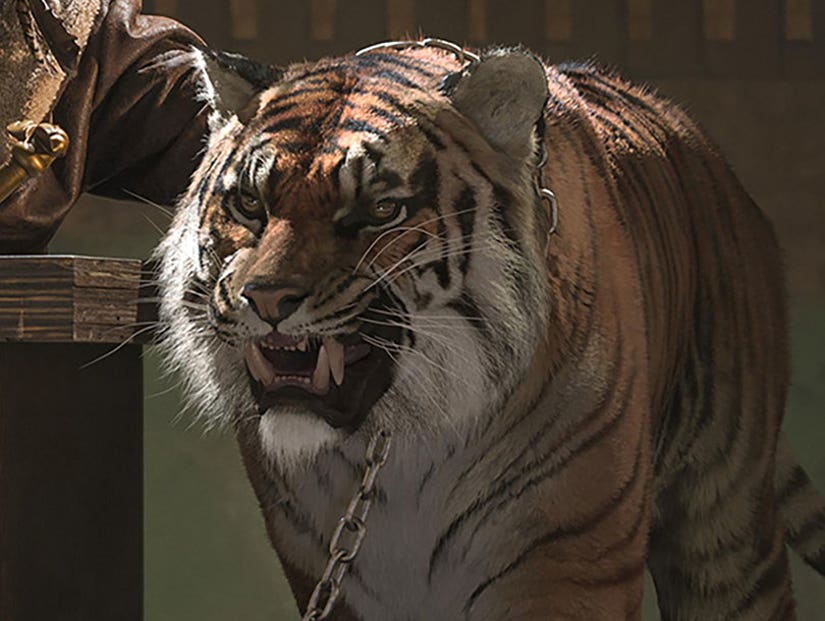 The last episode of "The Walking Dead" featured the brutal deaths of the entire Kingdom army, but it's the loss of a giant CGI kitty that really sent fans into a tailspin.

As you've probably heard by now, Ezekiel's (Khary Payton) faithful tiger Shiva was killed off by a swarm of zombies in "Some Guy," the devastating Episode 4 of the show's eighth season. She saved her master's life, giving the wounded king the chance to escape with Carol (Melissa McBride) and Jerry (Cooper Andrews), and tore a lot of Walkers apart in the process; but ultimately there were just too many of them, and the big cat was devoured by the undead.

Earlier in the episode, viewers watched the good guys getting shot and turning into zombies, somebody getting chopped in half with an axe and another guy getting stabbed in the stomach -- but the tiger's death was the one that had people sobbing and even changing the channel because they couldn't bear to watch.

Payton explained to The Hollywood Reporter that the tiger's death represented the loss of "a rare beauty [from] this dark, apocalyptic world."

"That's the symbol she carries for Ezekiel. She's the symbol and embodiment of the Kingdom itself. Who knows how many tigers there are left in the world? At least in [the Walking Dead world], she is a rare creature. I think he felt that way about the Kingdom. It's a rare place. Seeing that symbol that got him through the early stages of the apocalypse, that was the breakdown for me. It's all she represented. I wasn't just thinking about a CGI character necessarily. I was thinking about the embodiment of this rare and beautiful thing he had willed himself into believing could happen."

*Watches #TheWalkingDead and 20 people die*
Me: I'm okay!
*Watched The Walking Dead and the tiger dies*
Me: pic.twitter.com/JAe3yqyBMJ

The tiger being eaten in the walking dead is by far the most tragic death of the show. #RIPShiva pic.twitter.com/ng7oie5ubv

Me when a CGI tiger dies on #TheWalkingDead pic.twitter.com/7SEarF2MT0

Rest In Peace Shiva. You were the hero that no one deserved #TheWalkingDead pic.twitter.com/Pv8bpZfqYe

It's ok everybody... Glenn is riding Shiva in heaven #TheWalkingDead pic.twitter.com/lFwvfdsF07

When glen died on the walking dead I cried, but as soon as Shiva the tiger died I literally couldn't catch my breath. Wtf why 😭😭 pic.twitter.com/sCEwfD4rSw

No! That did not happen! Shiva is hiding under a dumpster! #TheWalkingDeadUK pic.twitter.com/Ndrfax2apG