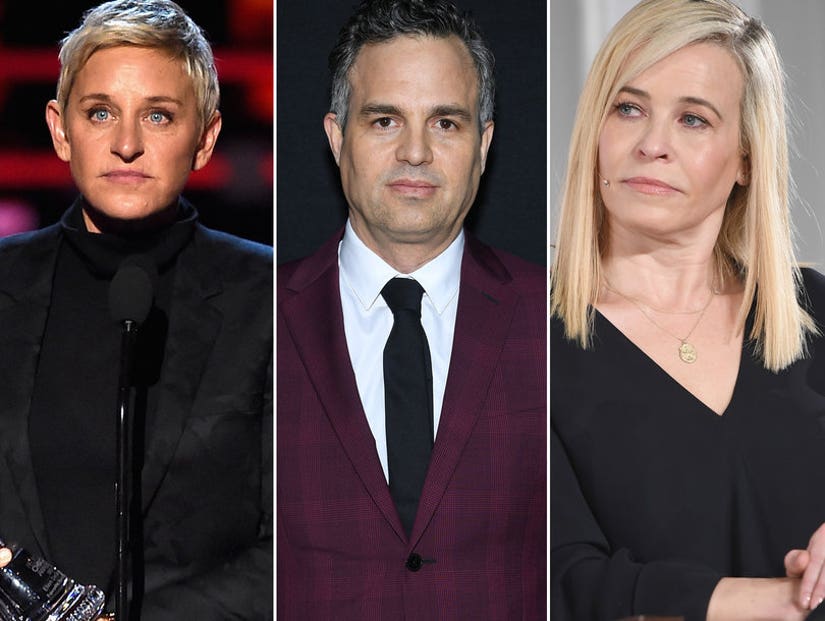 Many of the biggest names in Hollywood are calling for more than "thoughts and prayers" after the horrific school shooting in Florida.

A gunman -- identified as former student Nikolas Cruz -- opened fire inside Marjory Stoneman Douglas High School in Parkland, Florida on Wednesday, resulting in "numerous fatalities." At least 17 people were killed. The shooter, who reportedly used an AR-15, is in custody.

While the story is still unfolding, top names in Hollywood have turned to Twitter to plead for stronger gun laws and some action.

No words, no actions, no laws are enough until we end this epidemic of school shootings in our country. My heart is with the students and parents of Marjory Stoneman Douglas High School.

We have to elect candidates that are not funded by the NRA in November. We have an opportunity to elect candidates who won't allow kids to go to school and get shot. It is disgusting how many times this has happened and Republicans do nothing. You all have blood on your hands.

We owe it to our children and our teachers to keep them safe while at school. Prayers won't do this: action will. Congress, please do your job and protect Americans from senseless gun violence

Prayers without accordant action are silent lies told to oneself, heard by no God, amounting to nothing. Action is the language of truth, the prayers of the Saints.

Like thousands in South Florida, we sent the boys to school in Broward County this morning... there are no words to describe the despair, horror & anger. This does not have to be our collective reality. How many more? How many children must not make it home?

Another school shooting, this in FLA. Congrats to the spineless cowards who do nothing to help us stem this horrific epidemic, ie CONGRESS

When
Will
The @GOP
Stop
Being
OWNED
By
The @NRA
And
FINALLY
Do
ANYTHING
About #GunControl?

Their thoughts and prayers mean nothing.

We must replace them all.

Then do something about it. https://t.co/0MLYXK7CEI

But we do. We feel unsafe.
And the vast majority of us also feel the issue is being completely neglected by the people we elected to solve these issues.
Bump stocks still legal
Gun show loophole still open
Universal background checks not implemented.

The images coming out of Parkland are horrific.
Heart breaking.
My anger and disgust at this point has shifted from the perpetrators of these nightmares to our elected officials.

Florida ... I love you. I am devastated for you. There are no words.

When will it be enough, leaders? When will you do something? How many more children have to run from their schools, sobbing, with their hands up? How many?

This domestic terrorism has got to be stopped. We have to be better than this as a society. #GunControlNow

Another tragic school shooting. 18 just this year! Hey Congress, your thoughts and prayers aren't working. Try something else you cowards.

Ok, well you can get hung up on the verbiage all you want, but that doesn't negate what a semi-automatic rifle just killed 17 people today and 50+ in Vegas. Call it whatever name you want...people can't do that with the bare hands. Mental health + gun control. https://t.co/FhBWzcJTAa

Broward school shooting--There will be prayers from Blabbermouth Don, Pence the Grinch, and their rightwing cohorts. There will be no call for any sort of sane gun regs.

Sending all my love and prayers to the families affected in Florida. More lives lost due to gun violence.. I don't understand how this is still happening after all the horrifying tragedies we've witnessed! My heart is in pieces today.

Here's an idea, US media: devote 1/10th of the frantic relentless energy you expand on whacking Trump to demanding gun control.
Your supine 'oh no, not again!' attitude to this issue is pathetic.

I'm not going to bother tweeting out any hashtag about gun violence prevention because I have given up. I'm not angry anymore. I'm just sad and resigned to this continuing to happen over and over again because the @GOP will do nothing to change gun laws. Blame them and the @NRA!

If people can blame drug dealers for the drug problem then we can blame the @NRA for the mass shooting problem.

Is ANYFUCKINGBODY IN OUR WHITE HOUSE OR CONGRESS PLANNING ON TAKING ACTION TO TIGHTEN GUN LAWS!!!! How many mass shootings must we endure before something is done to minimize this?!?!??

Our Congress has allowed NRA to hold a gun to their heads. They cowardly refuse to take any sensible measure to make it harder for criminals, crazies and kids to get these weapons. We will see this news story every week until we make them change.

Then do something about it. https://t.co/0MLYXK7CEI

My heart deeply hurts for the children and their families in South Florida that are going through a living hell.

These senseless acts have to stop.

💔 #GunControlNow Sending out all my thoughts, love and anger along with the families friends and community of the Victims in Florida #parklandshooting #guncontrol. We Must Take Action. Changes must happen #WhatIfItHappenedToYou https://t.co/0ccJ28X4hK

My heart 💔 #Florida #Parkland I'm with you.

Such a sad and scary world we live in these days. My thoughts and prayers go out to all of the victims and families affected by this tragedy in Florida today... 😪

My prayers go out to the affected families in my hometown state of #Florida , absolutely horrible.

My heartfelt prayers to all the victims and their families as we all try to process another senseless shooting. I have no words... 💔 #Parkland

Noooo. Not again 😢 something has to be done !! https://t.co/wwYrtW5DTg

Says something about the Current government when they'll fight tooth and nail to ban abortions but don't want to fight to protect school kids. Didn't realize pro life meant you could pick and choose which children. #GunControlNow