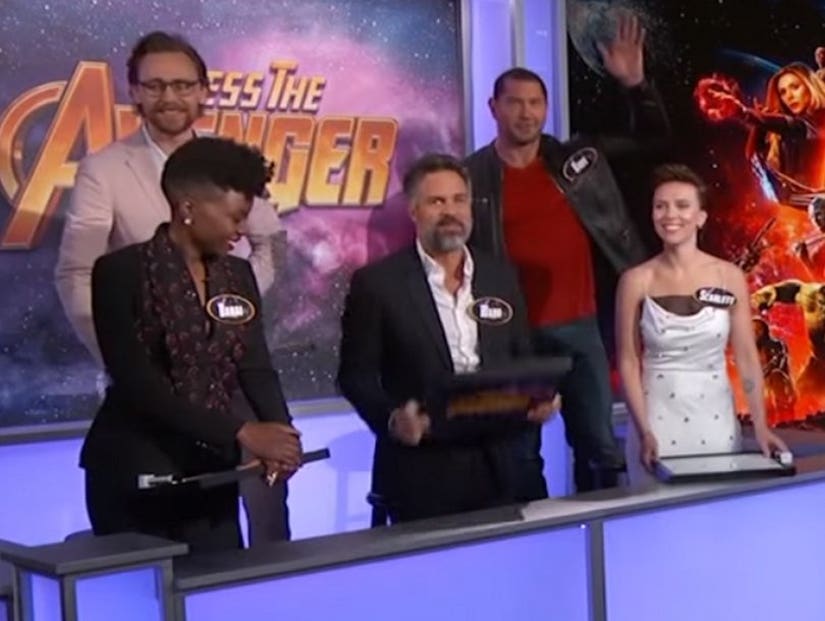 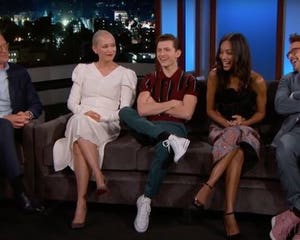 With a cast of seemingly thousands, Kimmel could probably keep trotting out new Avengers every day this week (and in fact, he's going to do just that). He certainly had a lively bunch for this episode, with bonsai trees flying almost as fast as secrets.

Ruffalo nearly blurted out the three moments during "Avengers: Infinity War" that made him tear up before realizing no one else had seen it yet. At least he kept his phone off this time, unlike the 20 minutes of "Thor: Ragnarok" he broadcast via Instagram Live at that movie's premiere.

Once again, the Avengers drew their superhero counterparts for charity, laughed a lot about working together, and even shared an incredibly awkward encounter during a silly game.

Jimmy Kimmel didn't pull any punches in this game that asked the cast to try and identify which Avenger each question was talking about. The very first question was, "Which Avenger flashed a stranger in an airplane bathroom?"

That one turned out to be Scarlett Johansson, who of course had to tell the story now. It doesn't do it justice to try and explain it, but suffice to say she forgot to lock the door and so a man opened it while she was doing what you do in a bathroom. He saw more than he expected, then looked up in shock, then recognition and there are times it's good not to be a famous movie star.

Other questions included which Avenger can play the spoons, has a vitamin collection, lost their virginity on a golf course and planted trees on the 50-yard line of their high school football field as a prank. 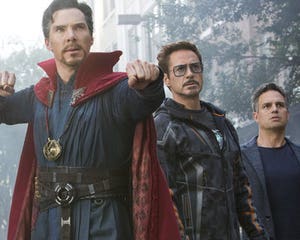 After exposing all their secrets, the cast joined Kimmel on the couches to talk about the big premiere of "Avengers: Infinity War" they attended Monday. Tom Holland was Monday's worst secret keeper, and no one had any problem identifying Mark Ruffalo as the worst in this group. And not just because he was inadvertently broadcasting the premiere of "Thor: Ragnarok."

Later in the interview, Dave Bautista admitted that he'd seen "Guardians of the Galaxy" in theaters six times, but only got recognized once. He says he remarkably blends into the crowd. Meanwhile, Ruffalo has people shouting "Hulk!" at him as he walks down the street, even though they don't even use his face on the marketing material. "It's the Hulk," he lamented.

Once again, Kimmel had the cast draw their superhero counterparts for charity, and Tom Hiddleston did an impressive job of capturing the playful anarchy of Loki. Ruffalo remembered the Hulk's iconic purple pants when putting his picture together, but for some reason, Scarlett Johansson decided to draw Ruffalo instead of Black Widow.

"You're like my spirit animal," she told him, looking deep into his eyes. They then said in unison, "When's your birthday? November 22? Yours, too?" It was both cute and weird, while Kimmel found it a little nauseatingly adorable. 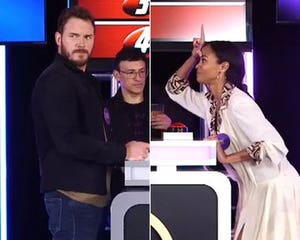 Both Dave Bautista and Danai Gurira were able to share the experience of being a part of a film that so far surpassed expectations to become a cultural phenomenon. Gurira compared making "Black Panther" to making a baby. You hope it's cute, but you don't know until people see it.

Meanwhile, Tom Hiddleston revealed that he has been accepted into the Aussie family. "I'm the honorary Hemsworth," he explained, referring to Thor's Chris Hemsworth and his famous brothers. Kimmel joked that he must have been declared "Hemsworthy," which was such a bad pun we had to share it with you here. You're welcome.

Finally, Jimmy Kimmel revealed how Marvel is expanding their marketing to try and have "Avengers: Infinity War" appeal to audiences outside of its superhero base. As part of this effort, he showed the trailer for the romantic comedy version, called "Love Infinity."

In it, we get to enjoy the romantic tension between the Vision and Scarlet Witch, Black Widow and the Hulk, and in a surprise no one saw coming, Dr. Strange and Peter Parker. And we all thought the hair raising on Peter's arm was because of the giant portal opening over New York City. Turns out it was love.

Audiences will get to watch it all unfold when "Love Infinity" -- er, we mean "Avengers: Infinity War" hits theaters this Friday. 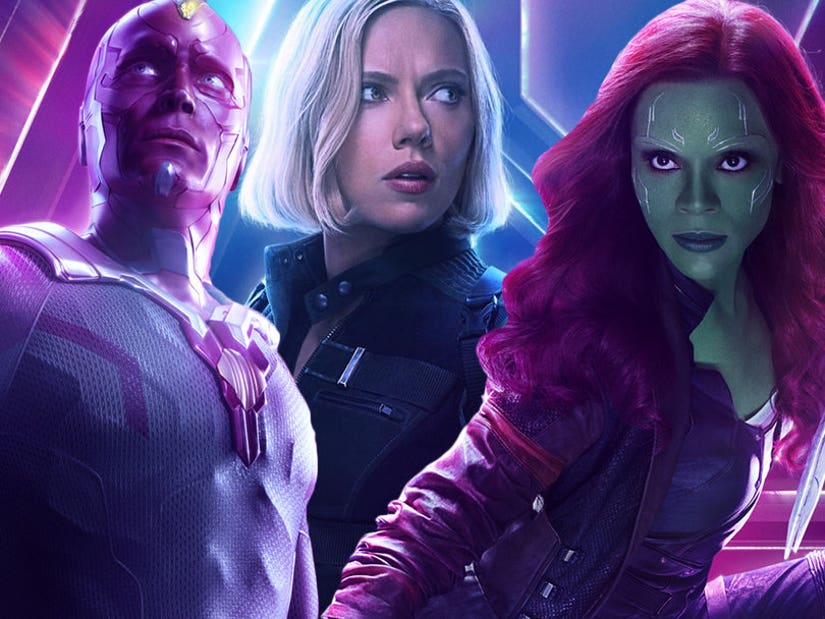