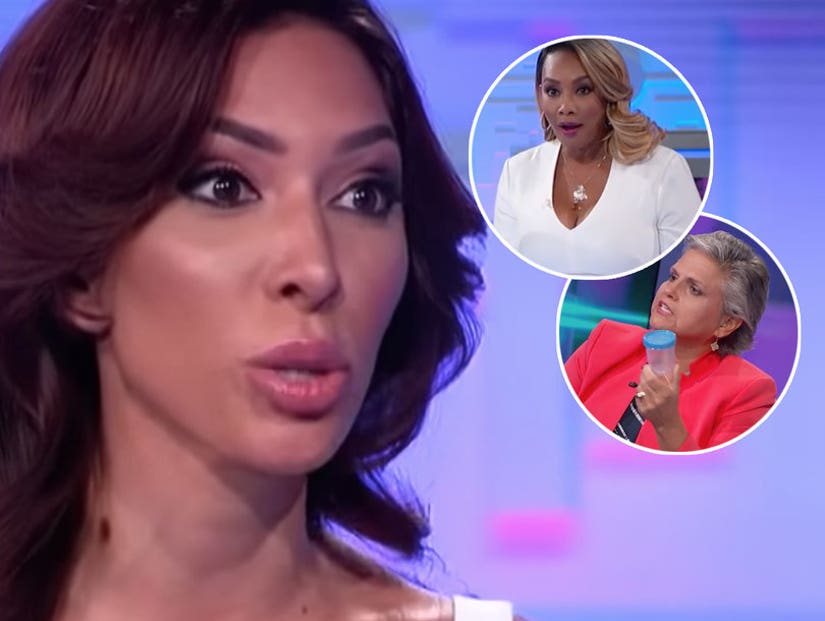 The former "Teen Mom OG" star accuses the show of lying, before railing against "non credible host" Vivica A. Fox on social media after taping.

Update at 2:30pm PT on 9/17: After seeing Abraham's criticism, Vivica A. Fox released the following statement to TooFab: "It's too bad that Farrah could not Face The Truth! We pray for her daughter Sophia and her mother! Maybe seeing herself on the show today will open her eyes and her heart!"

Phew, boy, was Farrah Abraham's appearance on Vivica A. Fox's "Face the Truth" one helluva showdown.

The former reality TV star appeared on Monday's episode alongside her mother, Debra, as the two attempted to mend their relationship with the help of Fox and her panel.

What happened instead was a complete trainwreck, as Abraham walked off and then proceeded to bash the show on social media.

Let's start with the good stuff, as Vivica called out her guest for constantly wiping her nose, insinuating she's on drugs.

"Why you keep wiping your nose like that?" Fox asked.

"I'm literally so cold my nose is running," she responded. "I'm sorry, that's what happens when I get cold. Should I have production make it warmer so my nose doesn't run?"

That's when Dr. Mary Chrzanowski whipped out a cup for her to pee in, asking, "Will you take a drug test?"

The following clip picked up with Debra explaining why she also believed her daughter uses, as Abraham held onto the cup.

"Her behavior is so erratic and always aggravated and always short fused," Debra said. "I just can't imagine why we have to have that constantly."

"I don't know anything about that, I'm just me," Abraham replied, before defending her sniffles. "I'm really f--king cold and I will take this because I need to go pee and blow my nose. It is what it is."

Later in the show, Abraham's test results were read on air. Let's just say they didn't go as she planned.

According to Chrzanowski, Abraham tested positive for barbiturates, while Debra's test came back negative. Though the panel said the positive could be due to prescribed drugs from a doctor, Abraham denied she takes anything at all.

"I'm sorry, what? I'm confused," she said, before claiming the show may have mixed up the results. "I'm just a little confused of what a barbiturate is. I don't think either that's mine and I have to say did someone confuse something? I have to be that blunt at this moment in my life up here, I'm sorry if it sounds so crazy. I am so laughing out loud right now."

Fox was offended by the comment, finding it laughable Abraham thought maybe "one of us just went and peed in a cup for you and made you come up with a barbiturate test?"

"Let's say it's a false positive and leave it at that, we're not gonna win with her," said Chrzanowski.

"I actually think it's screwed up, why would your test do a false positive?" asked Farrah. "I'm wondering what the hell's going on with the test. I'm going to follow up with the producers who actually initiated this. God only knows if it's real."

Apparently Abraham stormed off after that, but after a break, Fox brought out psychotherapist Joanne Koegl -- who conducted the test -- and explained how it was administered.

"We like to deal with facts here with Face the Truth and Farrah, she left the show because she said were lying about her drug test," said Fox, before Koegl added that the results were "100%" from Farrah's test.

Abraham lashed out at the show on Instagram on Sunday, the day before her episode aired.

"When your (sic) the only real person on stage & face the truth every day of your life #livingmybestlife some non credible host has 4 other women degrade, hate and act like their credible yet can't even show respect for them selves," she wrote in a lengthy post.

"Let's just say crap like this is disgusting probably already canceled & she has to pay her audience and guests heavily to even tolerate this backwards thinking," she continued. "What about women lifting women up? #timesup What about not putting down others to make your self feel better - my recommendation for all of these hosts is to get off tv, go find self love, take care of their own mental health, their stunted children & families & not one women was credible on the show as well I have no respect for women who have to lie, degrade, and be jealous of another amazing women."

Abraham ended her message by writing, "I'm so blessed I make the world a better place one pathetic show at a time."