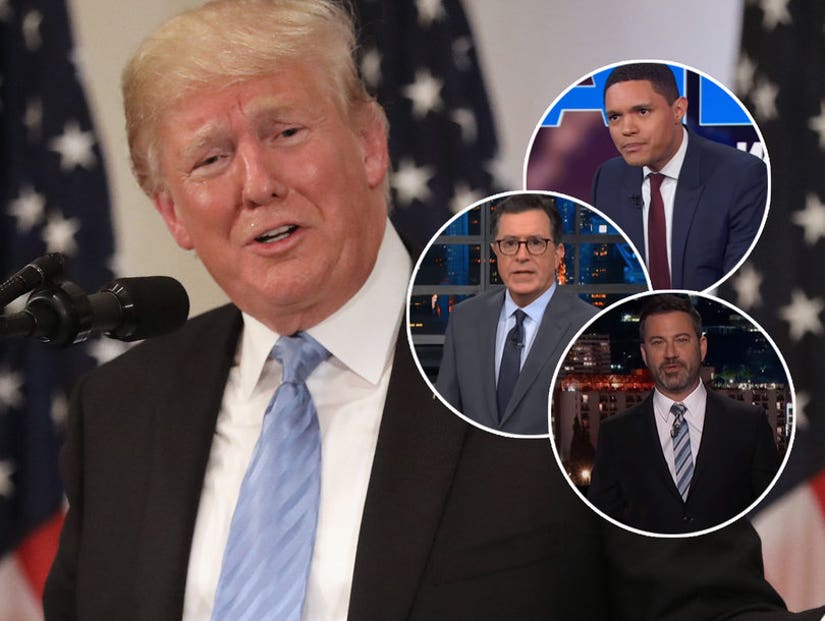 "The wheels are off the wagon, it's time to put grandpa in an assisted living facility," joked Jimmy Kimmel.

Donald Trump gave his fourth press conference of his presidency on Wednesday afternoon, as late-night scrambled to include some of his outrageous quotes in their opening monologues.

Trevor Noah, Stephen Colbert and Seth Meyers all noted that the conference was still happening when they walked out to tape their shows, but they still had plenty of material from what they had already seen. James Corden and Jimmy Kimmel also got in on the action, while Jimmy Fallon avoided the topic, likely due to when he films. 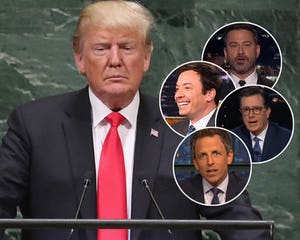 During his 81-minute press conference, Trump touched on everything from Brett Kavanaugh's sexual misconduct accusers to the size of his brain and even found a way to disparage George Washington, while talking himself up the whole time.

"You're reminded whenever he does it why he doesn't do it and why nobody wants him to do it on his team," Noah said. "It is the wildest, incoherent rambling of words put together."

Colbert called the conference "unbelievable," while Kimmel characterized the event from our "demented president" as "rambling, angry, jumbled dishonest and frequently incoherent."

"The wheels are off the wagon, it's time to put grandpa in an assisted living facility because he cannot care for himself," Kimmel continued. "It was like the craziest voicemail from your mom ever, it went on and on, all over the place ... it was bananas ... they could easily have sold this thing to Netflix as a comedy special."

The Washington comment was one every host referenced in their monologues, as Trump called Democrats a group of obstructionists by saying, "George Washington, the Democrats would have voted against him, just so you understand. And he may have had a bad past, who knows. He may have had some, I think, accusations made."

"Now George Washington defeated the British, so in my perspective, I agree, he does have a very bad past," joked Corden. "He went on to say maybe, Abraham Lincoln was talking a little too loud in that theater. I'm just saying, he wasn't perfect."

"Yeah, he had a couple things. That cherry tree. The fake teeth and oh yeah, he owned slaves," said Colbert.

"I would hope that George Washington wouldn't be approved today, because if he got there and they were trying to confirm him today, I would hope someone would ask him, 'Now it says here you have 300 slaves," joked Noah. "By today's standards, you would hope the person wouldn't get confirmed. I'm not saying he was a bad guy back then, but for now."

At one point during the conference, Trump referred to himself in the third person, saying, "China has total respect for Donald Trump and for Donald Trump's very, very large .. a-brain."

"He wanted to say penis so bad," joked Corden. "You know what they say about guys with very very large brains. No, I don't either, because nobody ever says that!"

"This is not a good thing," warned Kimmel. "When your brain is swelling, it means you have CTE. It's common in the NFL."

Trump also accused Democrats of being "con artists" when it comes to the allegations against Kavanaugh, calling the scandal a "big fat con job."

"A big fan con job? I'm pretty sure those were the results from Trump's physical," joked Meyers.

"That is a harsh attack on these women," added Colbert, "but it would make an honest slogan: Trump 2020, a big fat con job. Technically, a 239 pound con job."

He ended the press conference by saying, "I always like to finish with a good one. Elton John said 'When you hit that last tune and it's good, don't go back."

"This is a press conference, this is crazy," Corden said of the Elton comment. "Although at that point, Trump could have put on a sequined jacket and launched into a rendition of 'Crocodile Rock' and it still wouldn't have been the weirdest part of that press conference."

"If there's anyone who should be on a farewell tour right now, it's Donald Trump," he added.

While Colbert ended his monologue urging Republican senators to call for an FBI investigation in Kavanaugh, Kimmel called up God to see if Trump has ever actually prayed for the Supreme Court nominee. God, AKA Billy Crystal, made it very clear that that wasn't the case.

"Now I got this orange imbecile saying pray for Brett Kavanaugh? I got 50 million people talking to me at once, I don't got time for this, it's stressful," he said.

The only thing he hadn't prayed for: Kavanaugh.