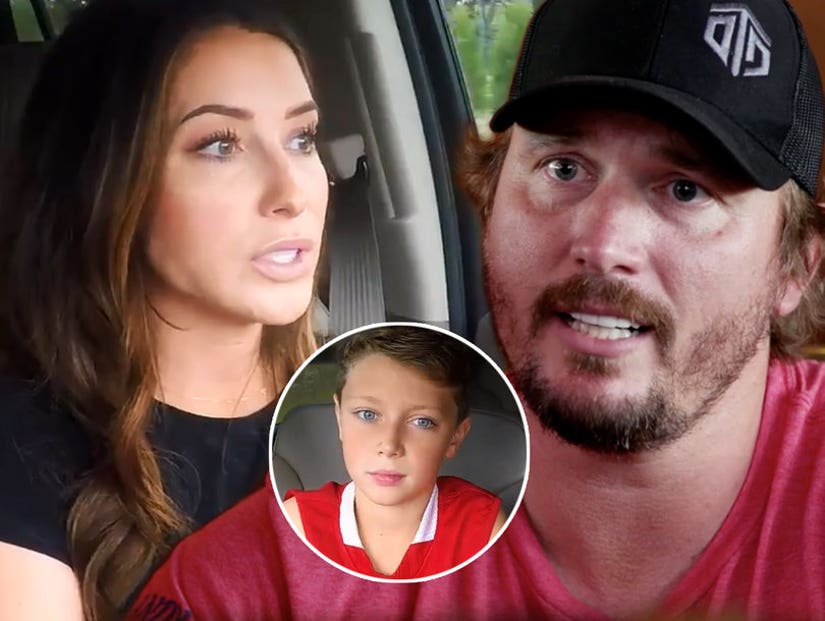 Co-parenting was the theme of the night on "Teen Mom OG," as the show's stars all navigated their complicated and ever-evolving relationships with their exes.

While some -- namely Bristol and Dakota -- showed no to little signs of improvement, others appeared to be heading in the right direction.

Here's what you missed on Monday's brand new episode!

“I'll support you in whatever you wanna do.” 💞 Bristol is having a talk with Tripp about his relationship with Dakota after the split on tonight's new #TeenMomOG. pic.twitter.com/FkVzHkUtlc

While Bristol Palin and Dakota have worked out a schedule with their two daughters, it's a trickier situation for her son Tripp. Though Tripp isn't Meyer's son -- Levi Johnston is his papa -- Palin said her ex "was like his dad" for good chunk of his life.

Though Bristol encouraged them to have a relationship, telling her son she's "all for it" if he wants to keep seeing him, Tripp seemed ambivalent about it. He looked uncomfortable during the whole conversation with his mother, giving her a solid "eh" when asked if he wanted to keep up with Dakota.

Talking to one of his own friends, Dakota said that he loves Tripp "to death," but it's on Bristol if they're going to keep a relationship. "I don't know what his mom's telling him," he added, "I worry that if I reached out, that I'd be dealing more harm than anything to him."

In the end, Dakota said he's there if Tripp needs him, but he's "not going to push anything."

Catelynn and Tyler Baltierra haven't started their trial separation just yet, but it's on the horizon. In the meantime, they went to get a sonogram and revealed they'd be naming Novalee's sister "Tezlee." Yep, apparently that's a name. "Oh, that's cute," said the sonogram technician, lying.

Tyler's dad Butch came for a visit as well, asking Tyler if the baby on the way was planned. "F--k no," he replied, "I'm not trying to bring some kid into this shit!" Ah, romance.

Butch also asked if Tyler ever thought about possibly missing out on sleeping with more women in his life, which got an emphatic "YEAH!" from his son. "I'm trying to figure out how I can be supportive to Cate without being destructive to me," added Tyler.

Later, Cate had her own one-on-one with Butch, who made his amends to her as part of the rehabilitation process. "I know you worried about me a lot, I think you caught me once, I had just got done getting high," he said, something she confirmed.

"I felt bad for whatever trauma I may have caused you guys," he continued. "This is why I'm trying to make some amends to you and let you know if you have any bad feelings, please let me know. I regret the way I acted, I was an asshole. I was an alcoholic addict. What can I do to make things right?"

Her only request: "Continue to stay sober."

Leah is growing up 💗 Watch @AmberLPortwood share a special moment with her daughter on tomorrow night's #TeenMomOG. pic.twitter.com/uN9wrQ6lye

While Amber Portwood kicked off her segment by saying her depression had been "resurfacing," what followed was a very sweet storyline that showed how much everyone here has grown.

Now a 10-year-old girl, Leah has started feeling self-conscious about the hair growing on her legs, avoiding dresses altogether out of embarrassment. Amber worried about her daughter feeling insecure -- as she had also already started making comments about her weight -- and decided she and Gary's wife, Kristina, could do something together to cheer her up.

The two of them decided to show Leah how to shave her legs, getting her her very first shaving kit. "I thought it was a good idea if Kristina was a part of it, she is a huge part of Leah's life when it comes to big milestones," Amber admitted. "She's going to be part of those as well. That's how it should be when you coparent."

Later, however, Amber said it did bother her that Leah didn't want to go to her house more often. "I want to be here for moments like this and always be around when big things happen," she said, adding that she's not like she used to be when it came to parenting.

"I feel like my past creeps up behind me with her. I don't want her to keep thinking like that," said Portwood. "No matter what has happened, I'll be there for her. I want her to know everything is not that way anymore."

It seemed to be all worth it though, as their last scene ended with Leah hugging her mom and saying, "I had fun today."

Bentley is a big brother again! 👶 He's gushing all about his newest sibling to @MaciBookout on tomorrow night's new #TeenMomOG at 9/8c on @MTV. pic.twitter.com/UU01nBwxcf

Also dealing with an ex -- or at least his parents -- was Maci Bookout, who let Jen and Larry have Bentley for a few extra days while they waited for his baby brother to arrive.

Though Ryan missed the birth because he was still in rehab, Maci said she thought it was important Bentley was there and keep a strong connection with his other family.

"We're adults, we can all put our bullshit aside for children to spend time with their siblings," Maci explained.

Cheyenne Floyd was kind of a non-starter this week, as she and Cory both toyed with the idea of getting back together again. Cory looked flustered after one friend asked him if he was happy Cheyenne was single, while Cheyenne questioned her feelings for him as well.

"I love our relationship, I love that we're goofy, I love all of it. I love how we parent, how we can talk every day," Cheyenne confided to a friend. "I love all of it and at what point do I separate that and my feelings for him?"

That's the question. We'll see where this one goes as new episode of "Teen Mom OG" air Monday on MTV