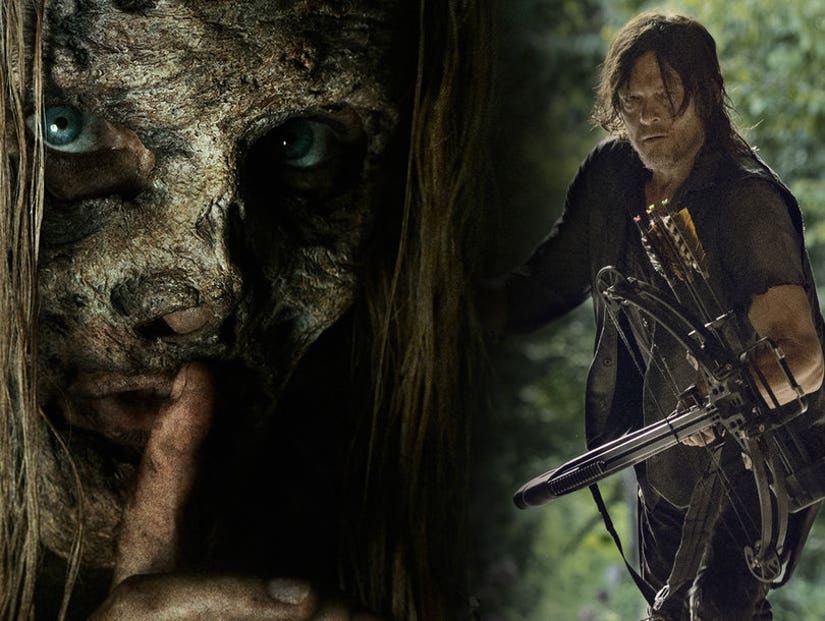 We need to talk about that last second appearance ... and big pregnancy reveal.

"The Walking Dead" shuffled back onto the small screen tonight as the second half of Season 9 kicked off with the introduction of a few familiar (and highly anticipated) faces from the comic books.

While the Whisperers were officially unmasked for the first time in the mid-season finale -- which saw them brutally murdering fan-favorite Jesus (RIP, we're still not over it) -- we learned more about the new threat in "Adaptation."

Keep reading for four big revelations and/or questions we're left with after the premiere. 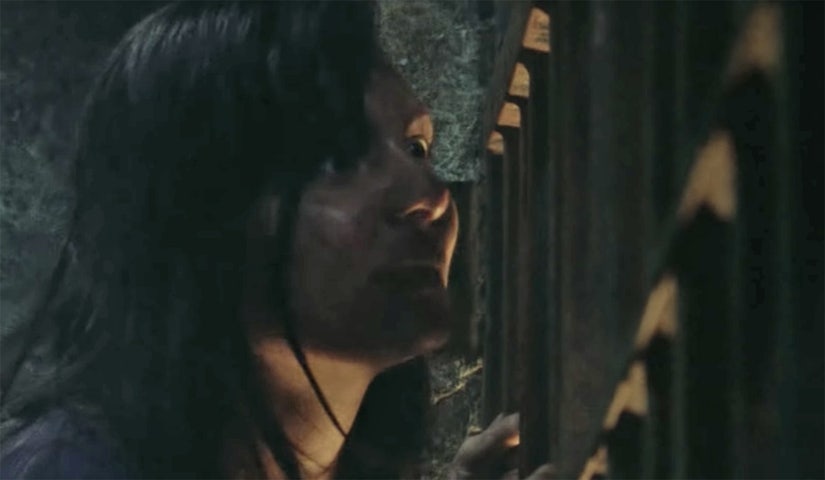 Michonne, Daryl, Aaron, Magna, et. all were able to escape from the cemetery ambush without suffering any additional casualties, but that wasn't their last run in with the human flesh-wearing bad guys. While bringing Jesus' body back to Hilltop, they once again squared off against the disguise-sporting villains in a rickety old bridge, really doing some damage before taking one of the Whisperers hostage.

Though we didn't learn her name until the very end of the episode, the girl they captured is Lydia, a character from the source material who has very important ties to the rest of the Whisperer group. On the show, she's played by Cassady McClincy.

As she revealed more and more about her gang, it becam clear Daryl and Michonne didn't exactly trust everything she was saying ... and we probably shouldn't either.

She explained they're "good people" who only wore masks 'to blend in" with the dead. Lydia added her people simply wanted to know if Michonne's group were "good" too, but they "attacked us," playing the victim. She also told Daryl they were only 10 of them, they don't have names and don't believe in camps or safe havens like Alexandria. "Places like this don't make it, they never make it," she said.

She went on to call her mom a "good person" who's still out there all alone, and believed "everyone that's alive is a threat." Lydia was last seen talking to Henry inside their respective jail cells, as Daryl listened from the outside.

It'll be interesting to see what else Daryl can learn from spying on their conversations, as well as Lydia's relationship with Henry going forward. In the comics, she and Carl bond, so it seems like Carol and Ezekiel's son will be stepping into that role in the episodes ahead.

We'll definitely learn more about her past next week -- so stay tuned! 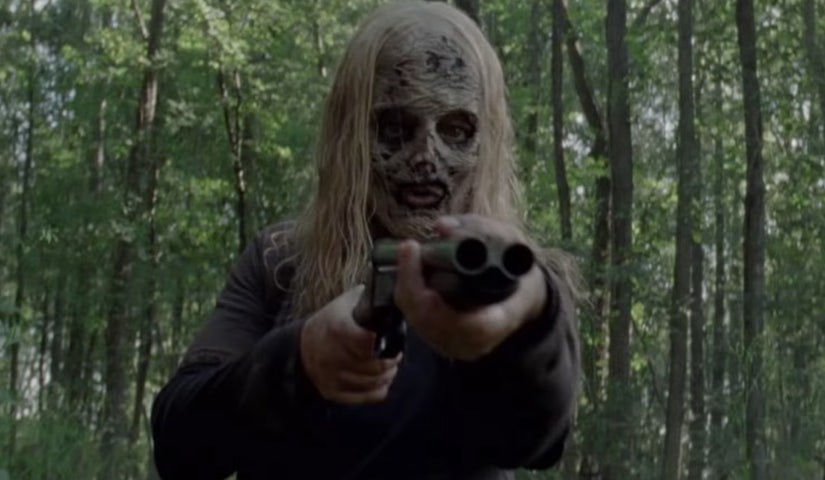 Worried about Michonne and the other survivors, Alden and Luke went on a rescue mission to try and track down their friends. Of course, it was an unnecessary trip, as the group returned to Hilltop while they were gone.

While out in the woods, they bonded over their love of music and came up with their own band name, Symphony of Awesome. Less awesome, however, was the group of Whisperers that surrounded them while on their friends' trail.

It seems like Lydia was lying about there only being 10 in her posse, as a giant horde of Whisperers circled the two men. One woman stepped forward with a shotgun, telling them, "Trail ends here."

Though she didn't introduce herself, all signs point to this being Alpha, another comic book character and leader of the Whisperers. Actress Samantha Morton was cast to play her this season and Morton's name appeared in the end credits. Also, previously-released key art of a masked Alpha match the figure in the last moments, right down to her piercing blue eyes and signature belt buckle from the source material.

She's another one we should expect to learn more about in the weeks to come. For now, let's just say that if that was Alpha, these guys are in trouble. 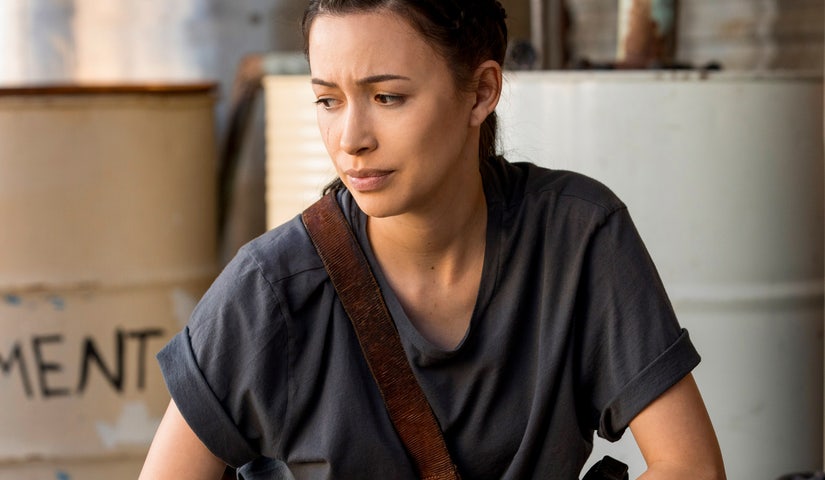 Any time a female character throws up on a TV show, she's almost always pregnant and, thankfully, "The Walking Dead" didn't take too long to confirm that news for Rosita.

After she got sick in the episode, she confided in another survivor that she is, in fact, expecting. And this news only makes her already complicated love life even more complicated. We already knew that Eugene's in love with her and she's been shacking up with Gabriel, but a third man just entered the picture.

The baby daddy is apparently Siddiq, who she was "having fun" with before Gabriel.

Her pregnancy could signify a major connection to the comics and anyone who's read them knows what we're talking about ... but we won't get into that here. How do you think Gabriel and/or Eugene will react to the news though? 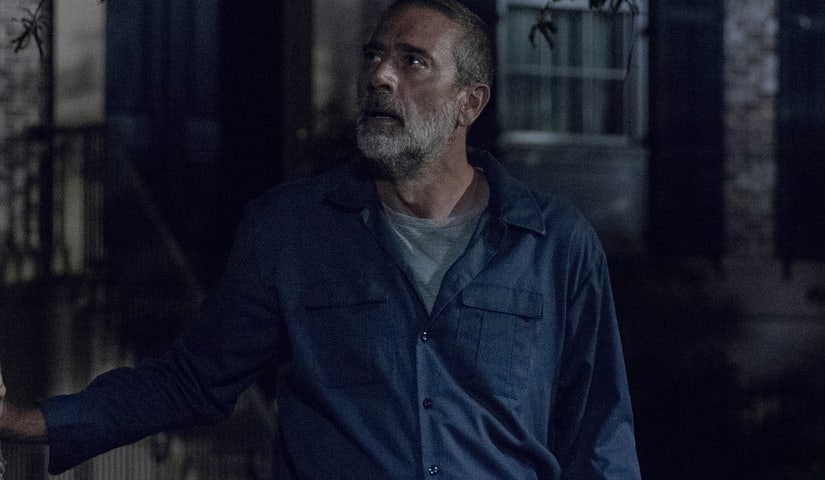 After being locked up for quite some time in Alexandria, Negan experienced the fresh air for a bit after breaking out of his cell.

Before he was totally free, however, Judith Grimes held him at gunpoint and threatened to shoot him if he tried to flee. "Rules are rules, my mom decides and not me," she said to him by the town's walls.

"You're not letting me go, you're just not seeing me leave," he said to her, before promising that he won't hurt anybody on the outside, "even if they try to hurt me." That got a serious "Sure, Jan" from us, but Judith bought it and let him go.

On the outside, he started rebuilding his iconic image, picking up a leather jacket and a pipe to substitute for Lucille. Eventually, he made his way to the Sanctuary, perhaps thinking he could once again take the place over. While he called it "Home sweet home," it quickly became clear that it's a run down, abandoned mess.

One by one, his former Saviors come out of the woodwork, all walkers by now, leaving him to put them down one by one. It's a scene reminiscent of Jadis putting all her trash people out of their misery when they turned, too. Realizing there's nothing waiting for him on the outside, he returned back to Alexandria.

Judith gave him an "I told you so" when he returned, before asking what he'll do now. "I got a good look outside by 10x10 and there is nothing here for me, not anymore," he said, "I will let you know when I know."

Has Negan been rehabilitated at this point? Do any of you think he'll ever be let out of his cell? We're curious to see how this plays out, especially with the threat of another group looming over the survivors' heads.