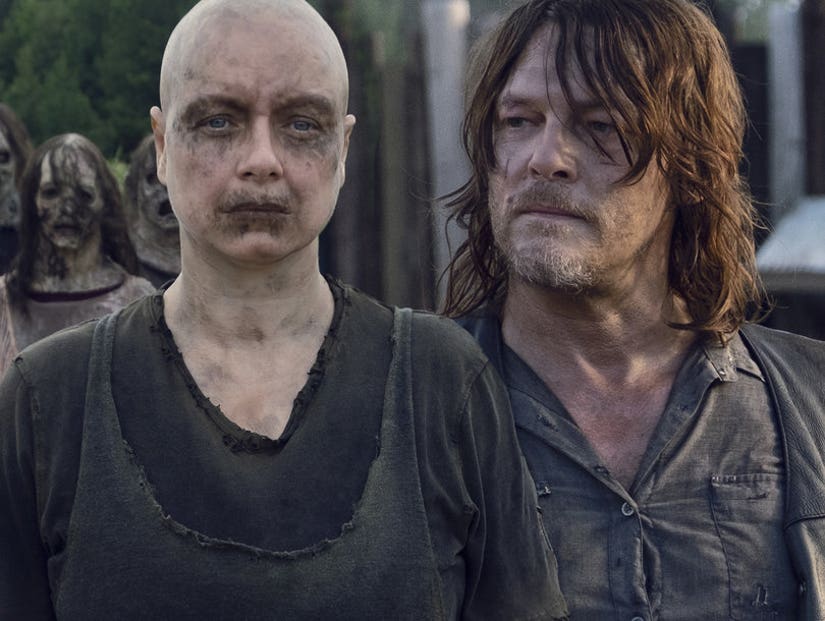 A standoff between the Whisperers and Hilltop drives the story forward, as flashbacks tease more unanswered questions.

The Whisperers and our favorite group of survivors went head to head, as they had their first real standoff since Alpha's big, official introduction last week. She wanted her daughter, Lydia, back, in exchange for two of their own.

Along the way, we learned her people are pretty damn ruthless, as they almost let a baby be devoured by a few hungry zombies. Who else was biting their nails before Connie came to the rescue? Yes, let's all pause to give props to Connie.

There was a trade, a new area outside of town was explored and a few tantalizing tidbits about the past six years were teased out during "Bounty" -- here's what we're still wondering after the latest episode!

Just How Big of a Threat Is Alpha?

When Alpha and her people confront the survivors at Hilltop, Daryl made it clear that his crew has a ton of firepower, firepower it doesn't seem like the Whisperers are packing as well. Yes, Alpha has a shotgun and is an intimidating figure, but most of the others are equipped with knives, if anything. And we all know what happens when you bring a knife to a gunfight.

While they may not be evenly matched when it comes to artillery, the Whisperers may have weaponized something even greater: the walkers themselves. By shuffling among the dead, the flesh-masked maniacs could possibly divert whole hordes towards their enemies, before overpowering them.

Though they were able to peacefully negotiate a trade with Luke and Alden for Lydia, things certainly won't stay civil between the two groups much longer. Which brings us to our next question ...

Did Carol and Ezekiel Cross Into Whisperer Territory?

Carol, Ezekiel, Jerry and a band of survivors from the Kingdom had a side-mission of their own, one that found them taking out a movie theater full of walkers to secure supplies for the upcoming festival. There was a killer zombie-eliminating montage, a few cute moments between the king and queen and a newfound sense of hope in Carol's eyes, but the entire story ended with a warning.

As they made their way back home, they passed a sign with a red sigil of some kind on it, one that may signify they unknowingly entered and pilfered from Whisperer territory. Both Alpha and Lydia have made it clear in this episode and previous ones that they don't take too kindly to anyone wandering onto their land.

Could snatching up that projection bulb have some dire consequences down the line? And just how much land do the Whisperers claim as their own? They don't exactly seem like they'll be down for any kind of trade agreements, so how does everyone move forward? If the show's previous seasons are any indication -- see: The Saviors, The Wolves, Terminus, The Governor, etc -- another bigger showdown may be on the horizon.

What Is Henry's Plan?

While those at Hilltop exchanged Lydia for Alden and Luke, Henry was not on board with the trade. First, he tried sneaking his new friend out of town to keep her safe, but that didn't work.

Despite failing to keep her safe from her menacing mom, Henry vowed to get her back. He went out on his own to try and save her, leaving a note behind for Daryl saying he "couldn't live with" the exchange. The episode ended with Daryl, his good dog, Dog, and Connie -- who said she couldn't "live with it either" -- teaming up to find him.

When Will the Backstory Be Explained?!

More nuggets about what went down during the six year time jump were teased out at the top of the episode, which saw Jesus very much alive again during a short flashback.

The scene found Tara, Jesus, Carol and Ezekiel meeting up for a secret trade. At this point, things were already dire between the Kingdom and Alexandria, the latter community refusing the help the former as much as they probably could with supplies. Along with some necessities, Tara also provided Ezekiel with a copy of Michonne's charter for the communities, a charter the King still has faith in.

What we still don't know is why there was such an intense falling out between all the communities. Yes, we know the Rick's "death" probably had something to do with it, but the show has been light on the specifics so far.

Henry also brought up Daryl's X scar during the episode, with the boy referencing something big Daryl did to help Alexandria during the gap. "I saw the scars on your back, I think you know more than anyone what we just sent her back to," he added, referring to Lydia and her mom. It was a touchy subject for Daryl and we need answers about this, and fast!

There's reportedly an episode coming up in a few weeks titled "Scars" that should fill in some missing plot points.

Until then, "The Walking Dead" airs Sundays on AMC.