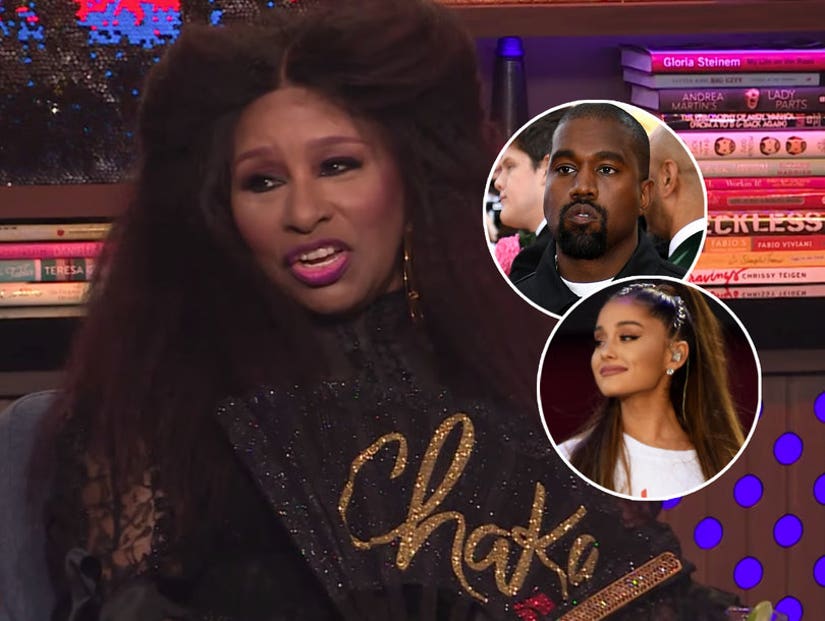 "I was pissed," the singer says of the rapper's sample of one of her songs.

Chaka Khan may have made some money off of Kanye West's "Through the Wire," which sampled her hit, "Through the Fire," but she did not like the result.

Appearing on "Watch What Happens Live" on Wednesday night, the legendary performer came ready to spill on a few of her famous collaborators, including Kanye, Ariana Grande, Prince, Whitney Houston and Aretha Franklin. She also revealed why she didn't have too great a time at a gathering of icons, Oprah's Legends Ball, in 2005.

First up, the West diss.

Andy Cohen asked how the conversations with the rapper went when he asked to sample her hit song for "Through the Wire."

"Very differently than the song turned out, obviously," she said. When Cohen asked if she was "not happy," Khan added, "No. He called me when he just got out of the hospital. He said, 'You were so instrumental in my healing process. I changed the words a little bit to the song but I had to eat through a wire. I was wired shut through a straw. It meant that much to me.' It really got my heart, tugged at my strings. I was like, 'Yeah, use it.'”

Then she heard the song and how sped up the sample was in the end result. "I was pissed," she explained. "I thought it was a little insulting. Not insulting: I thought it was stupid! If I'd known he was gonna do that, I would have said, 'Hell no.'"

She added that she never reached out to West to let him know her reaction. "What can I say. The best way to tell him is silence, I give him crickets." Well, he'll know now.

Khan was also a little shady about her experience at Oprah's Legends Ball, though it wasn't due to anyone in particular.

"Listen, all of us went in all looking fresh and starched and shit, then by the time was over we looked like 30 broads in a friggin' sandbox," she explained.

"We were crying, people were crying and laughing at the same time, it got very insane," she added. "I was pissed because I had on a suit this guy made me, didn't fit. I was wearing my hair straight and I hate that shit. I was sitting right next to Michelle Obama, who was our future first lady at the time, and I had no idea. I can't pretend, so that's how I felt. Find the picture."

In a photo from the event, which you can see here, Khan -- in purple -- does look a little over it.

Later, she spilled on a few former friends and collaborators.

First, Khan accidentally confirmed an upcoming song with Ariana Grande, as someone offscreen told her she wasn't supposed to talk about it.

Speaking about the performers at Aretha Franklin's funeral, Khan said Grande "did a great job," before adding, "Ariana and I are doing a song together, in a new movie."

Looking off camera, she asked, "The new movie called, what's the movie? Oh, I'm not supposed to be telling. Aw shit."

She also spoke about Prince, Whitney and Aretha.

"I don't know if it showed, but he was a lonely person. He's lonely," she said, when asked what people would surprised to know about the late, great Purple One. She added that they were not in touch the last year or so before his death and was "not aware" of any troubles in his life.

Of Whitney covering "I'm Every Woman," Khan said, "A song is a free agent." She added, "If you can rock the song, rock it. If you can't, you need to leave it alone."

Of reports Aretha wasn't a "people person," Chaka simply said with a laugh, "She didn't have time for all that."