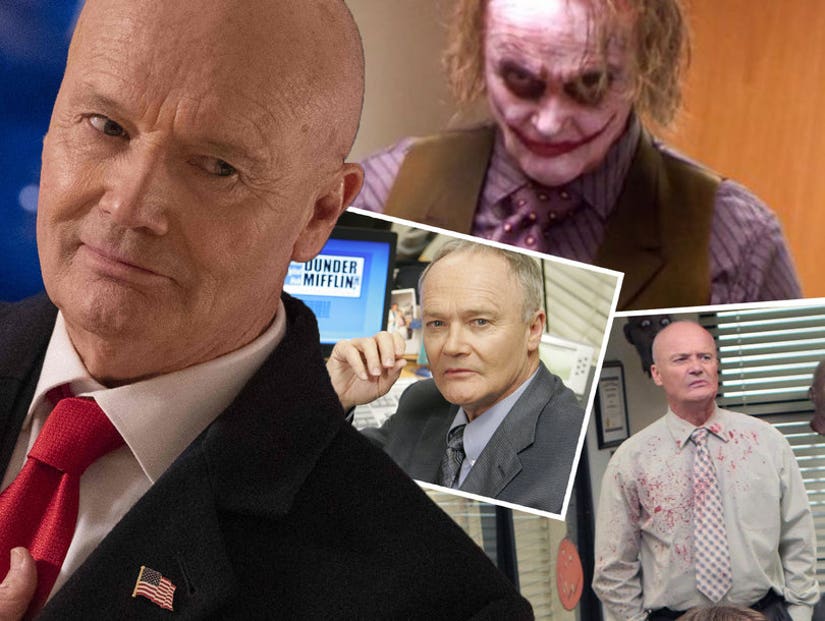 The sitcom alum is ready to go from lovable creep to downright creepy.

As Creed on "The Office," Creed Bratton -- yes, that's also his real name -- was a fan favorite. He was always slightly off, always funny and was maybe, just maybe, the Scranton Strangler.

But that's peanuts compared to his role in Hulu's latest installment of its horror anthology series, "Into the Dark: Culture Shock." The topical episode, which drops on the 4th of July, follows a Mexican immigrant who learns the "American Dream" may not be all its cracked up to be.

While we don't want to reveal too much about Bratton's role, it's safe to say it's a sinister one -- and one that really allowed him to branch into a totally new genre. "I don't think they're going to expect this," he said of "Office" aficionados who check out the episode. "I hope they're surprised. I hope they're surprised by it."

On his character's evil said, he admitted fans "don't expect that from me," warning that viewers will realize "right off the bat" that "something's really not right with his guy."

The 76-year-old actor and musician said he's not necessarily a fan of horror movies -- save for classics like "The Silence of the Lambs" and "Aliens" -- but had a ball playing a true villain. "They're so much fun," he said, adding he'd love to play more in the future.

"I think what'll be fun for me, is to play like Hannibal Lecter, ya know, an old cannibal killer," he said. "So old, he has to gum his victims. That might be something I'd do."

a Joker movie remake we can all agree on pic.twitter.com/EE0XL08Oay

Another role he'd be into? The Joker.

Earlier this year, a fan made a mock poster using a shot of Creed in costume as Heath Ledger's Batman villain from "The Office's" 2008 Halloween episode, "Employee Transfer." When we showed him the image, he was obsessed.

"I would love to play him," said Bratton, who then repeated the character's iconic line, "Let's put a smile on that face," just like he did in 2008. According to the actor, his "Office" costars had no idea how he'd look when he showed up on set.

"They hadn't seen me," Bratton revealed. "The same thing with when I walked on the set the first time I had put the copier ink on my hair, none of the cast had seen me. That look on his face is shock. They hadn't seen me in the Joker. They kept me over there, and when I walk in from the side it was the first time they'd seen me in the Joker. And when I lay that line on them, you could see heads shaking going 'Ewww.'"

Watch the epic moment back below:

Bratton joked that that one scene was "the harbinger of me getting to do this bad guy role" in "Culture Shock," but his reasons behind doing the Hulu project all came down to the script.

"I couldn't put it down, talk about a page turner. And I called my agent and said please. I said, 'Let me go make a read for this.' They said, 'Really?' I said, 'No, it's a good script. It's a really good script.' And it's important too. I really felt it was important," he explained, touching on the timely themes of immigration in the piece.

As for all the online theories that his "Office" alter ego was actually the so-called Scranton Strangler, that's one secret he'll never tell.

"Why would you ask me that," he said, getting deadly serious. "Is there a statute of limitations on murder? That's something my brand won't allow me to talk about that. I gotta keep that one in the hole."