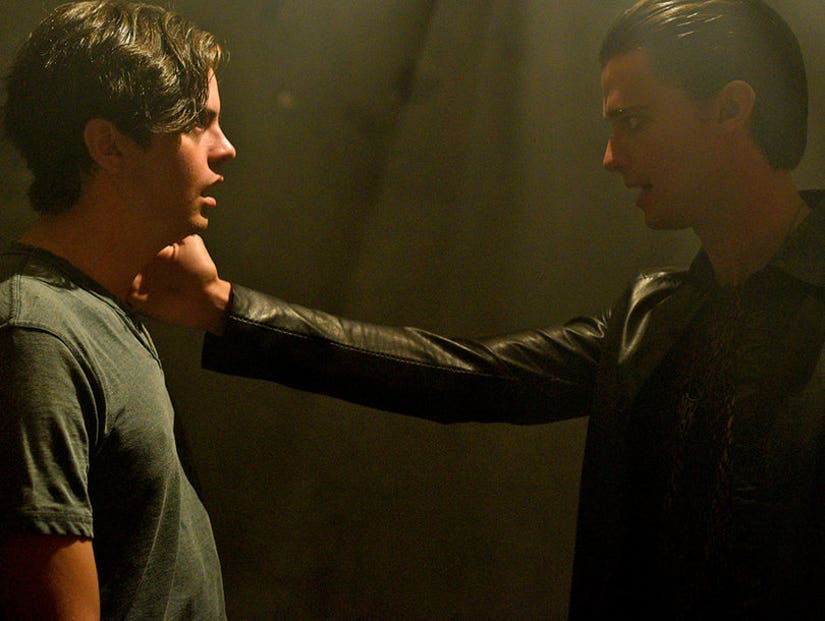 The actor also talks about tackling serious stuff with horror and the joys of playing evil.

Throughout the film, Daniel's darker side emerges, as he also jockeys for control of Luke's body. For that relationship to work, the two actors clearly needed to not only get comfortable with each other, but work together on that delicate balancing act between the characters.

As Robbins puts it, it was a "seesaw situation."

"He's a really great guy and he is someone who is very generous in the way that he works and gives and receives and discusses and was a pleasure to work with," he told TooFab of working with Schwarzenegger. "The duality of these characters is interesting because they're very unlike each other, even though they're, perhaps, technically part of the same thing. They're kind of this yin and yang thing. There's a balance of harmony to the differences between them. "

I enjoyed that I didn't have to feel like we were on the same page, more that we were balancing on the same seesaw," he added. "I thought he was a good person to see-saw with."

Though the two of them both come from famous families -- Miles is the son of Susan Sarandon and Tim Robbins, while his costar is Arnold Schwarzenegger and Maria Shriver's son -- Robbins said it was "definitely never talked about" between the two. "That's something neither of us ... that's the most I would ever not need to discuss it," he added.

Keep reading for more from our Q&A with Miles below:

Congratulations on this. You've been in a lot of films but this is the first one where you are the lead. Does that change things when you go into it?

No, it just changes like now, in my personal life, I can walk around like I'm really important. That's more what it's about. For me, it's about making myself feel more important.

[Laughs] No, it was cool. I love not being the lead. I love being a small character because all I really care about in doing anything is doing the best I can and overthinking my little bit and that's how I can show I'm grateful for having the best job in the world. I think that it's such a blessing to be able to act for a living. I can't imagine a better job. I've had a lot of other jobs, and I'm really, really glad that I get to do this one. I take it seriously. I hopefully don't take myself seriously, but I take the work as seriously as I can and try to do the best I can at my job. So when I have a bigger responsibility, I guess I take that commitment more seriously. At the end of the day it's just a longer version of the same amount of the care I put into one scene on something, because I'm just trying to be grateful.

You all did a great job in this and this film it tackles a lot. There's mental illness, toxic masculinity, and it's all wrapped up into a horror movie. What was it about that that really interested you?

I think that in making a genre movie, you have a really great opportunity to use abstraction to allow the audience to project their own experiences of the world into this thing. That's kind of what art is kind of all about. It's super weird to be a hairless monkey that wears pants, but we find ways to make sense of it by using metaphor. It's a really good arrangement of that metaphor to have an idea that you want to talk about specifically, but put it through this sort of specific extended allegory. I just thought that was a great opportunity to talk about some issues that are really, really relevant and do it in a way that might not feel like we're just beating the issue over the audiences' head by having a sword fight and some fun with prosthetics and crazy shit going on. I thought it was a lot of good things coming together and I was really happy to be a part of it. I mean, the cinematographer, Lyle Vincent is incredible. The CGI and the makeup and the music and all the different teams were on point and came together to make a really cool film, in your opinion.

You also have some of dark moments when you tap into the Daniel side. As an actor, what's it like to get in that headspace?

But when it comes to playing evil, oh that's fun. Because I'm not actually evil, and I get to pretend. You get to be like, "Oh, cool! Now I can play evil.' What it is, it's empathizing and that's the fun thing, it's figuring out how to be truly separate from yourself and be this evil guy and understand him is some of the most fun stuff in acting.

I also make music, and I think music is about portraying yourself as honestly as possible. And acting is kind of a strange inversion of that, where you're inviting yourself to empathize and understand somebody outside of you in a really profound way. And so to do that with somebody who's very outside, very much an actual demon, that's the most fun way to act, I think. I enjoy doing that part.When I was a little kid, I might try to spook my parents or my brother and that's basically the same thing. There's something fun about trying to get that reaction.

The body horror effects in this movie are crazy, especially after you guys start to merge a bit. How was it working on those moments and seeing the finished product?

Well, I'm really happy it worked out and looked good, I think it looks great. It's a really great combination of practical and digital effects. I love and prefer practical effects, but I don't fetishize it. I understand there are ways that CGI can be used in a really effective way. And this, I think, is kind of a perfect balance there that they really did try to go practical when they could and use digital effects when necessary, to complement it. I also loved wearing the rubber spaghetti monster mask. That is a lot of fun. I'm a big fan of movie magic stuff, because if there wasn't movie magic, we'd all just be watching plays.

The whole point of making movies is to use the language of cinema to do something that is totally otherworldly, so why not go all the way there and make a total f--king trippy, psychedelic Lovecraftian horror film? It's a lot of fun. I couldn't stop smiling and laughing and giggling and dancing around when I was in the most horrifying way imaginable. Because there's something amazing about it. There's something about seeing the monster getting a little ravioli on its chin at lunch. I love that. There's something so profoundly hilarious about being behind the scenes of that and something extra great about watching it terrify people when I'm the only one who knows that guy got ravioli on its chin at lunch.

"Daniel Isn't Real" is in theaters and on both demand and digital now.