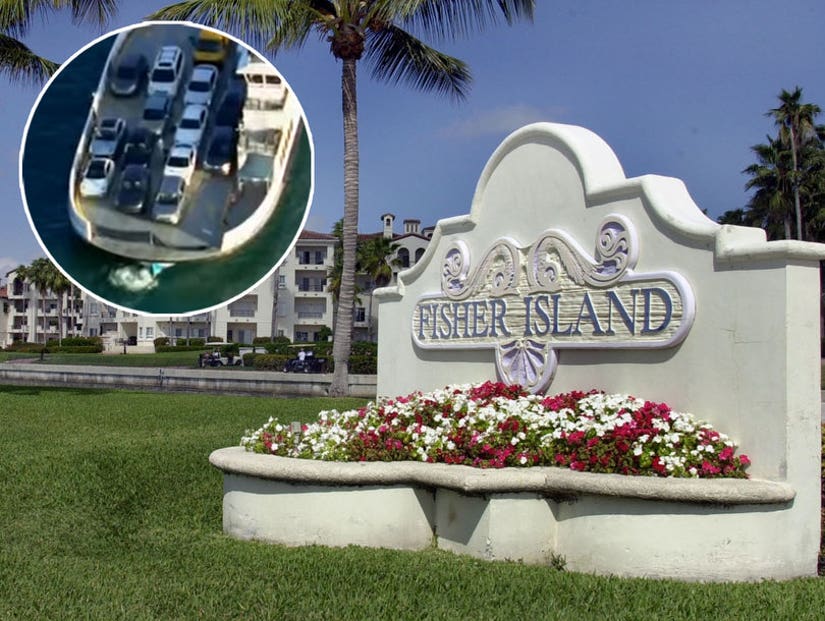 Two women were found in an embrace in the backseat of a sunken car that had rolled off a ferry in Florida on Tuesday.

Socialites Emma Afra, 63, and Viviane Brahms, 75, drowned while hugging after Afra's Mercedes fell into the 50-foot deep waters of Government Cut, a channel between Fisher Island -- dubbed "Florida's most exclusive private island" -- and Miami Beach, according to The Miami Herald.

The Pelican ferry had departed the island around 4pm for its two-mile journey which usually takes around 10 minutes. Rescuers were unable to recover the vehicle until 10:30pm because of fierce currents, according to the outlet.

HEART-WRENCHING: Police divers found bodies of Emma Afra and Viviane Brahms embracing each other in back of car submerged underwater.

Afra's 2019 Mercedes-Benz S560 was the lead car in the front lane of the ferry, only feet from the barrier that is made of thin tarp. Aerial footage obtained by WPLG shows the material torn and an empty space where the Mercedes was parked.

"We figured perhaps she touched the accelerator instead of the brake. That's what everyone is thinking," Fisher Island resident Diane Siegel told CBS Miami. "I have been living here for 23 years and this has never happened."

The Herald cited sources that support such a theory, saying they believe Afra forgot to put the automobile in park then accidentally hit the wrong pedal, as witnesses claimed the Mercedes appeared to accelerate and crash through the barrier.

Coast Guard spokesman Jonathan Lally told the publication that the Pelican's crew places blocks under vehicle tires and it was believed they were used on Afra's Mercedes. But investigators say the Mercedes could have easily accelerated over the blocks. The vessel is not equipped with video surveillance to have captured the incident, according to the outlet.

John Hickey, a lawyer who has ridden the Pelican, told the Herald that the thin tarp barrier is inadequate as a safety measure.

"Other ferries that I've seen have large steel barriers which also form the ramp," said Hickey. "The netting on the Fisher Island ferry is pretty insufficient. It's pretty flimsy. It's not going to hold anything back."

Women who died after car fell off ferry found embracing

Divers found the car upside down 52 feet below the surface. Emma Afra and her passenger, longtime friend Viviane Brahms were found hugging in the back.https://t.co/gdcTv4ndWO

Afra and Brahms appeared to be longtime friends, as they were well known in social circles in Miami and New York, according to the publication. They were photographed together at exclusive events, including an art gallery opening in New York in 2017 and an art lecture in Miami Design District in 2019.

"It's a jarring tragedy. When we heard about it everybody just stopped and started to think about these poor souls and their families. I think the whole community is very shocked," he said in a statement. "I have a lot of faith that the Coast Guard and cities in Miami Dade that are involved will get into a very thorough investigation to address this and make sure nothing like this ever happens again."