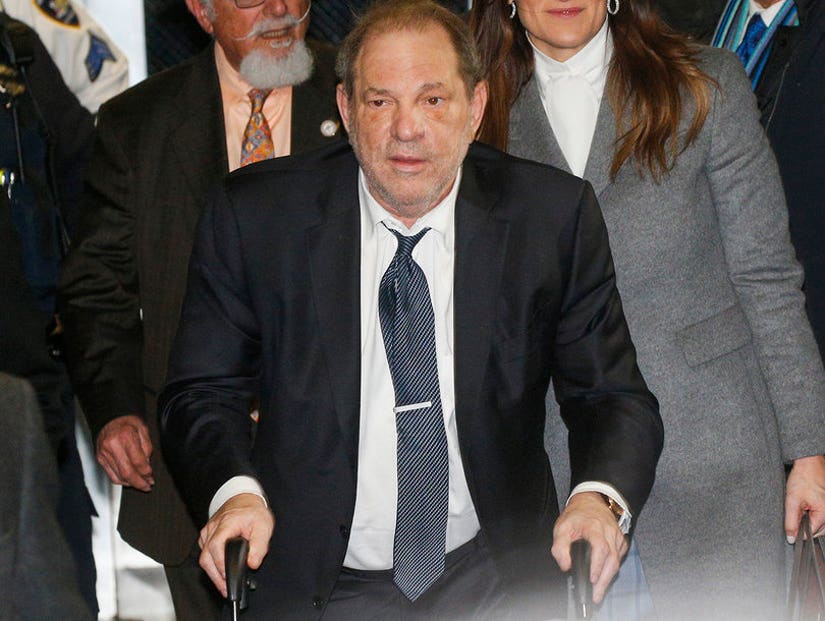 Sentencing will be announced at a later date.

Harvey Weinstein has been convicted on two of the five criminal charges against him.

On Monday, he was found guilty of one count of criminal sexual assault for forcibly performing oral sex on former "Project Runway" production assistant Miriam Haley in 2006 and one count of rape in the third degree involving aspiring actress Jessica Mann in 2013.

The disgraced movie mogul was initially charged with two counts of predatory sexual assault, one count of criminal sexual act in the first degree and one count each of first-degree rape and third-degree rape. He pleaded not guilty to all charges and claimed all encounters were consensual.

During the trial, actress Annabella Sciorra also accused him of raping her in her apartment in the early '90s with her testimony. While he wasn't charged with attacking Sciorra, her testimony was used to try and show a pattern of conduct.

He could get up anywhere from 5-25 years in prison for criminal sexual act alone, though sentencing will be announced at a later date. The charge of rape in the third degree comes with sentencing guidelines of probation up to four years.

The Times Up Foundation, which was founded in 2018 after the allegations against Weinstein were made public, released a statement following the verdict. "This trial — and the jury's decision today — marks a new era of justice, not just for the Silence Breakers, who spoke out at great personal risk, but for all survivors of harassment, abuse, and assault at work," Tina Tchen, president and CEO of the Time's Up Foundation said.

"We owe a debt of gratitude to Mimi Haleyi, Jessica Mann, Annabella Sciorra, Dawn Dunning, Tarale Wulff, and Lauren Young and all the Silence Breakers for their bravery and resolve as they faced this man in court," the statement continued. "We continue to believe them — all of them — and continue to be in solidarity with them."

"While it is disappointing that today's outcome does not deliver the true, full justice that so many women deserve, Harvey Weinstein will now forever be known as a convicted serial predator," it read. "This conviction would not be possible without the testimony of the courageous women and the many women who have spoken out."

"Despite intimidation from Weinstein's legal team, they courageously shared their stories with the jury, the courtroom and the world," the statement continued. "This has been a flawed process from the beginning but has further exposed the difficulties women face in coming forward to tell the truth about powerful abusers. Their bravery will forever be remembered in history."

"While we celebrate this historic moment, our fight to fix the broken system that has allowed serial abusers like Harvey Weinstein to abuse women in the first place continues," it concluded. "Abusers everywhere and the powerful forces that protect them should be on notice: There's no going back."

The #MeToo Movement also released a statement, saying, "Today, a jury confirmed what we all know: Harvey Weinstein committed sexual assault. This wouldn't have been possible without the voices of the silence breakers in and outside of the courtroom, the survivors who courageously testified, and the jurors who, despite an unrelenting and unethical defense strategy, voted to find an unremorseful Harvey Weinstein guilty."

"This case reminds us that sexual violence thrives on unchecked power and privilege. The implications reverberate far beyond Hollywood and into the daily lives of all of us in the rest of the world," the statement continued. "And, though today a man has been found guilty, we have to wonder whether anyone will care about the rest of us tomorrow. This is why we say MeToo."

After the verdict was announced, celebrities following the case and/or involved in the #MeToo and #TimesUp movements also reacted online. Rose McGowan, Ashley Judd, Rosanna Arquette, Asia Argento and Mira Sorvino, who all accused Weinstein of sexual harassment, rape misconduct, also shared their responses on Twitter.

For the women who testified in this case, and walked through traumatic hell, you did a public service to girls and women everywhere, thank you.#ConvictWeinstein #Guilty

Gratitude to the brave women who've testified and to the jury for seeing through the dirty tactics of the defense .we will change the laws in the future so that rape victims are heard and not discredited and so that it's easier for people to report their rapes

The beginning of #justice. More to come, my sisters. #weinsteinguilty

Today's outcome in Harvey Weinstein's New York trial is the result of the decisions of multiple women to come forward to journalists and to prosecutors at great personal cost and risk. Please keep those women in your thoughts today.

I believe Annabella Sciorra. Hard to imagine what this must've cost her to speak up like that. After everything she's been through.

This ⁦@nytimes⁩ piece I wrote feels as relevant as ever right now. I stand with the #SilenceBreakers and the men and women everywhere who have faced the injustice of silence for too long. #TimesUp
Amber Tamblyn: I'm Done With Not Being Believed https://t.co/PaxcoCWvhI

Right now Harvey Weinstein is on his way to prison. These are the women who put him away...

Now he will sit in a prison cell where he belongs.

Sending so much love, support and most of all gratitude to Annabella Sciorra and all of the women who came forward.

Grateful to all the courageous victims -and the villages that supported them- for stepping up and sharing your painful experiences so #Weinstein would be held accountable.

You have inspired and made a difference in the lives of many.

“Although Sciorra's rape allegation against Weinstein couldn't be tried due to exceeding the statute of limitations... “

I'd really like to see a change in law where rape has no statute of limitation. For so many reasons.

I applaud the women who bravely stepped forward to help forever alter the conversation around what they — and all of us — have to put up with. Gratified to see some justice being served here. #MeToo https://t.co/wR4f66uecj

Weinstein is down. I genuinely feared he'd get away with it knowing how hard it is to get justice for any victim of sexual assaults. Remember the two names; Joan Illuzzi-Orbon and Meghan Hast who prosecuted the case and perhaps changed the future for other women.

"I'm Harvey Weinstein-- you know what I can do."

Weinstein, whose signature throughout forty years of allegations was lack of accountability, has been declared guilty on two counts.