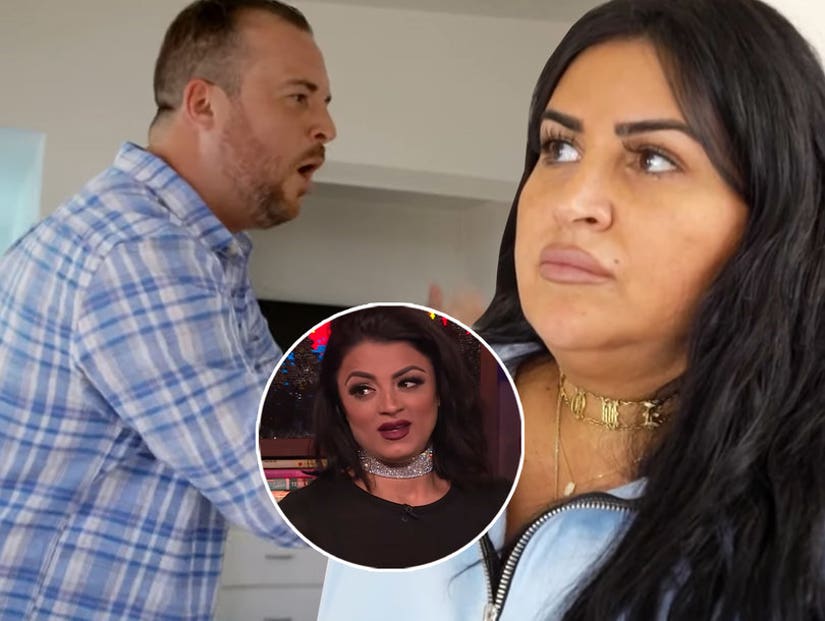 Golnesa "GG" Gharachedaghi is clearly Team Reza when it comes to the feud between Farahan and his "Shahs of Sunset" costar Mercedes "MJ" Javid.

GG appeared on "Watch What Happens Live" on Monday night, where she was asked about her take on the escalating scandal currently dominating the new season of the Bravo series.

ICYMI, Destiney's friend Ali claimed Reza's husband Adam had been sharing nude photos and playing strip Jenga with other men behind Reza's back. Adam said it was all done in a joking manner but when Reza met up with Destiney and Ali to go over the allegations, Ashouri said he felt sexually harassed. It was later alleged MJ first classified Adam's behavior as "sexual harassment," and urged Ali to bring it up on camera.

"I've been at the tail end of the stuff that MJ has plotted year after year after year," she said when Andy Cohen asked about the setup accusations, adding it's "understandable" when she's told that's what happened. "I do [believe MJ set it up]," she added, "100% I believe that."

When asked what MJ would have to gain from the situation, GG wasn't sure. "That's a good question," she told Cohen, "I don't know what her motives have been for the last 10, 11 years coming for me about random stuff. I don't know, I think she just thrives on it."

She also sided with Reza in regards to his frustrations with Destiney's involvement in the scandal. While Reza and Destiney have since squashed their beef with each other, GG revealed she too was "very upset" with Destiney when the allegations first came out. "I was upset for a while about the way she approached the whole scenario," she explained. "It was shady, there was a lot of times she could have approached both of them and she waited until the house warming party. To each their own."

Gharachedaghi added that she has not yet met MJ's son Shams, but isn't holding her feelings about the baby boy's mother against the child. "He's an innocent kid in this situation," she said, "I don't dislike baby Shams."

Andy also showed a sneak peek at next Sunday's new episode of "Shahs," showing MJ and her husband Tommy giving their side of the story. They claim Reza wasn't there for MJ when she was hospitalized, only calling her while she was in the Post-Natal ICU to confront her about Ali Ashouri's claims.

"You know Reza 30 years and he left you to rot in the hospital," Tommy shouts in the clip, adding that Farahan "knew the severity" of her issues. "Yeah, Reza is a real f--king piece of shit for not being there on that day," responds MJ, "While I'm under anesthesia from having organs removed, instead of dropping everything and racing to me, he calls to confront me."

Tommy then goes in on Reza's husband.

"Like everybody doesn't know Adam's the Hillbilly Whore of WeHo," he exclaims, "Like it's a secret he's polishing guys off at the gym. He probably got carpal tunnel syndrome from it!"