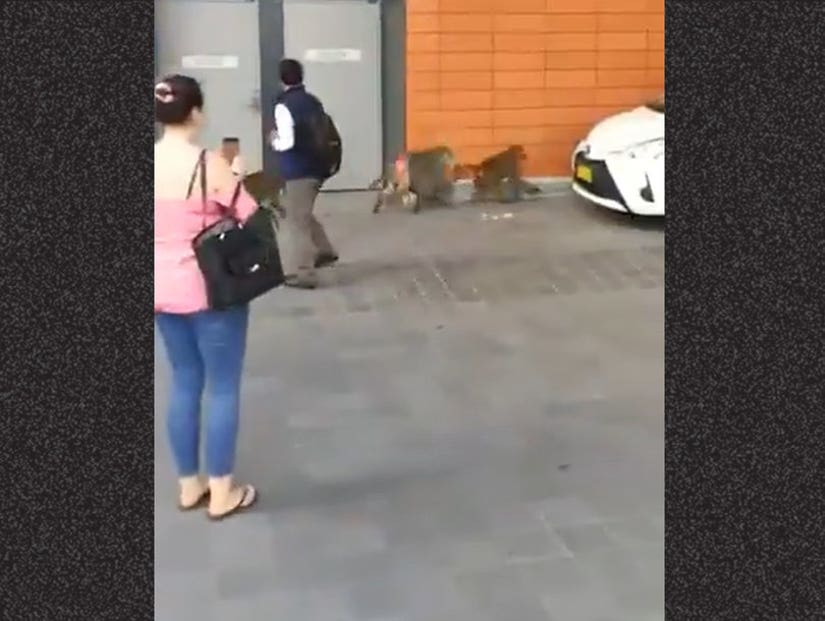 The monkey business went down at Royal Prince Alfred Hospital in Australia.

A baboon in Australia high-tailed it out of a medical facility before his vasectomy, and broke out his two female counterparts as well.

"They obviously decided that inspecting the premises was an appropriate way to spend a couple of hours at the hospital," said Hazzard. "Last I heard they'd had a good look around the precinct and ended up in the carpark where they were behaving far better than what we'd expect of baboons."

Videos online show the three monkeys on the lam, running alongside parked cars and avoiding the gawking human bystanders.

The New South Wales Police Force shared a cheeky warning on Twitter, posting, "This is not a Mandrill! Earlier this afternoon, a troop of baboons escaped from a facility and were going bananas in Camperdown. Police and wildlife handlers now have the situation under control, so please let them do their job and don't be tempted to pry, mates."

Members from the nearby Taronga Zoo sedated the monkeys before bringing them back to the hospital.

Health Minister Brad Hazzard said the baboons escaped while being transported by truck to the hospital from a nearby colony. https://t.co/4Hr22Yfwwf

This is not a Mandrill! Earlier this afternoon, a troop of baboons escaped from a facility and were going bananas in Camperdown. Police and wildlife handlers now have the situation under control, so please let them do their job and don't be tempted to pry, mates.

Hazzard stressed the three animals were not abused and only transported from a colony at a research facility to help their quality of life.

"They don't want him to continue breeding with the small troupe he's in so in order for him to stay, the decision was taken that he should have a vasectomy," said Hazzard, noting, "The two females were there just to keep him calm."

He explained to The Daily Telegraph what would become of the bandits when the dust settles.

It is of crucial importance that the authorities do not underestimate the guile of these baboons. They could be anywhere. Disguised as a baby with a bonnet and rattle, dressed in a bellhop's uniform - even now they could be imitating the butler of a short-sighted dowager.

Feeling very 28 Days Later about these baboons to be honest.

"After the operation him and the two wives will return to the colony where he can stay forever with them but he will no longer be having babies," Hazzard revealed.

He also detailed to the Herald how the primate escape was a first in his career.

Check out the hilarity that ensued online above as Twitter went wild about the monkey business.