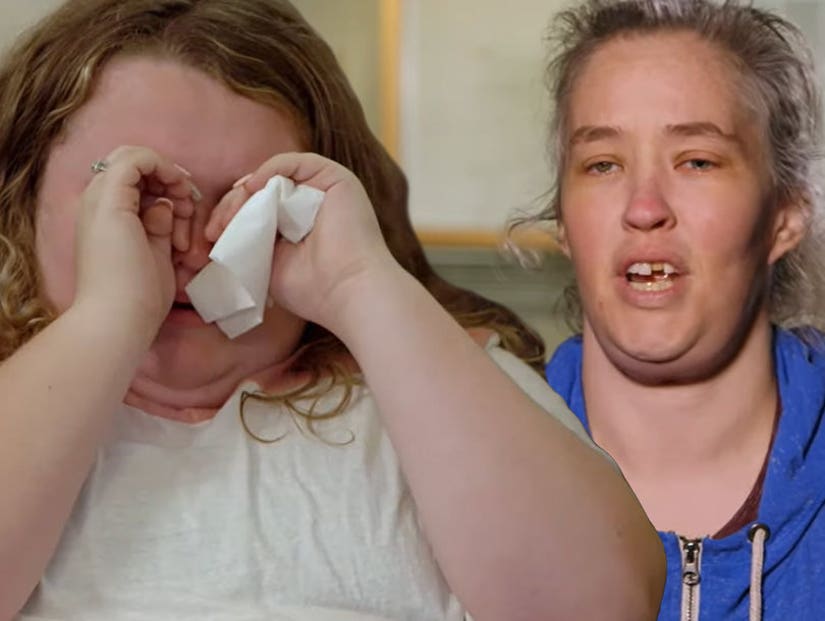 Honey Boo Boo pretending to snort cocaine on social media only adds to the chaos.

"Mama June: From Not to Hot" will continue to highlight the decline of June Shannon -- and show just how her behavior is impacting everyone else in her family.

Shannon has been on a downward spiral since she and boyfriend Geno Doak were busted for crack cocaine possession last year and it looks pretty bleak for her in this new sneak peek at the upcoming season of her family's WE tv show.

While most of the footage of June is from various court appearances, there does appear to be some kind of intervention between her and daughter Pumpkin, who has taken custody of Alana (aka Honey Boo Boo). Looking into the camera, June says, "Nobody knows what the real story is!"

The footage also shows June's sister Doe Doe trying to track her down and the fallout from that video of Alana pretending to snort a line of cocaine on social media. After it went viral, Alana's father Sugar Bear and his wife Jennifer, apparently considered getting full custody.

Adding to the insanity, Pumpkin is heard saying, "Mama said there's people after us, they may come after you. This is a dangerous situation," as they appear to go into hiding.

Below is the season breakdown from WE tv:

The fourth season of 'Mama June: Family Crisis' premiering Friday, March 27 at 9pm on WE tv, follows the Shannon family trying to cope with the fallout of Mama's arrest, drug addiction and dysfunctional relationship with boyfriend Geno. Leaning on each other for strength and support, the family struggles together to maintain hope for June's healthy return.

June's daughter Lauryn ("Pumpkin") and husband Josh have taken custody of June's youngest daughter Alana ("Honey Boo Boo") and are raising her along with their adorable toddler Ella — a ray of sunshine oblivious to the chaos unfolding around her. June's sister Joanne ("Doe Doe") is determined to find June and separate her from Geno, who the family believes is a bad influence.

Jennifer, June's nemesis and wife of June's ex-boyfriend "Sugar Bear", is eager to step into the spotlight vacated by June, winning a major magazine cover contest showcasing her own "not to hot" transformation. However, when Alana starts acting out on social media Jennifer decides it's time for her and Sugar Bear to step up and demand full custody of Alana.

Throughout the season there are many joyous family moments: Alana's return to high school and budding comedy career, Ella's unforgettable baby pageant debut, and breakthrough family therapy moments with Dr. Ish that help them move forward together in a healthy way. However, constantly lurking in the background is the frightening decline of their family matriarch — as June faces legal problems, physical deterioration, money issues and suspected abuse from the partner she refuses to abandon.

Will June finally hit her rock bottom and seek professional help? Can she return to the family as the "old June" they all miss terribly? Can love and belief in each other get them through a family crisis that is all too relatable to thousands of American families? Find out when "Mama June: Family Crisis" premieres Friday, March 27 at 9pm only on WE tv.